AGL Energy Limited (ASX: AGL) functions major electricity generation portfolio of Australia. On 11 June 2019, AGL reported that the company has secured the sole access to carry out due diligence on Vocus Group Limited (ASX: VOC) through the scheme of arrangement. This announcement is in line with the previous one, wherein AGL had reported that the offer to procure interest in VOC had been withdrawn. On 4 June 2019, VOC had notified about the termination of discussion with EQT Infrastructure with respect to an indicative proposal to acquire Vocus Group. As per Mr Kevin Russel, MD & CEO of Vocus Group, after the termination of the discussions with EQT Infrastructure, AGL proposed a non-binding agreement to acquire Vocus for $4.85 per share. Also, he stated about the continuous interests in the Vocus’ business; meanwhile, the decision of Board would always act in the best interest of shareholders while engaging with parties that bring proposals.

Vocus Group Operating Structure (Source: Investor Presentation, February 2019) As per the release by Vocal Group, the indicative proposal would be subjected to several conditions which include, completion of four-week exclusive due diligence period, a unanimous recommendation from the Board of Vocus along with an entry into mutually acceptable scheme implementation agreement. Also, the scheme implementation agreement would be subject to conditions including shareholder, court and regulatory approvals. AGL interprets that the acquisition would create material shareholder value, drive customer loyalty and provide market-leading integrated broadband fibre asset base, and open considerable additional options for long-term growth. Reportedly, as the energy, data value streams converge and the traditional energy sector transforms, AGL’s capabilities in integrating and managing complex assets, customer portfolios would meet the needs of increasingly connected customers is in line with AGL’s strategy. 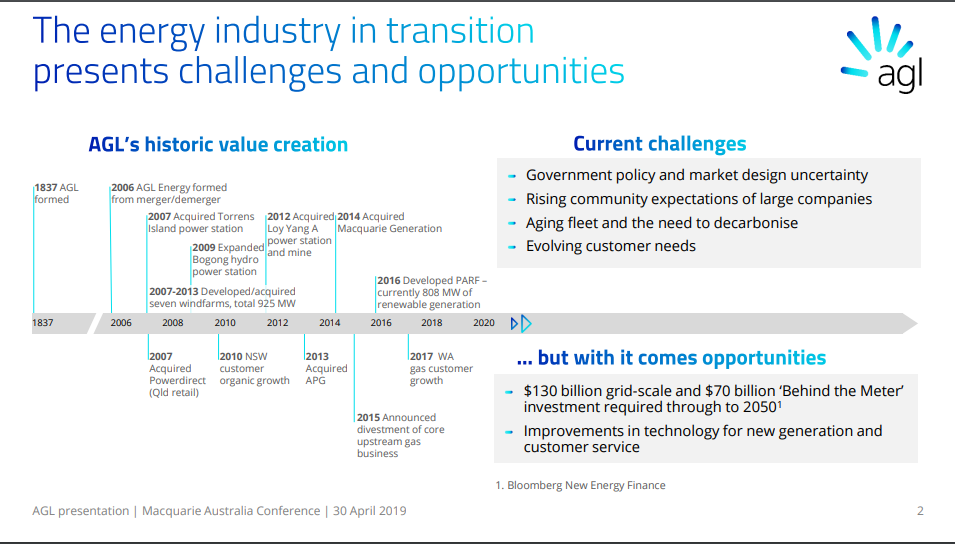 AGL’s Historic Value Creation (Source: AGL Presentation, April 2019) As per the AGL’s release, the company intends to utilise the existing cash & new debt facilities, which are subject to maintain a credit rating of Baa2 (debt facilities); however, AGL continues to assess other funding options. Also, the initial assessment of transaction by the AGL has concluded that the acquisition would be EPS accretive post its twelve months of completion. The discussion between both the companies are incomplete and the binding agreement would not be a guarantee, as reported. As per the release by AGL, the entry into the binding agreement would be subject to various approvals as mentioned above includes completion of due diligence, agreement of both companies’ boards, mutually acceptable scheme implementation. Also, any agreed transaction would be subject to the approval of Vocus’ shareholders and other conditions precedent. AGL Energy Limited believes that the acquisition would be strategically aligned with the company’s strategy to meet the needs of increasingly connected customers. As per AGL, the integration of two companies’ customer platforms would offer a wide range of energy and data products resulting in operating cost benefits & customer loyalty. AGL expects that the high-quality broadband fibre infrastructure network of Vocus would generate incremental value by tapping the potential of growth after the acquisition. AGL expects that the acquisition provides opportunities to develop new products and for consumers services as data and energy services converge in the future. Vocus provides services to large volume customers like enterprise, wholesale and government customers; these large volume customers would benefit from the integrated data and energy services. The Board of Vocus Group stated that the indicative proposal is no guarantee to would lead towards an offer for Vocus and its shareholders do not have to take any action on the proposal. About AGL Energy Limited AGL Energy Limited is an Australian energy company with more than 180 years of experience, committed to shaping the sustainable energy future, and it runs the country’s largest electricity generation portfolio. AGL intends to prosper in the carbon-constrained world by customer advocacy as the industry transforms, and the company’s portfolio About Vocus Group Limited Vertically integrated telecommunications service provider, Vocus Group Limited operates in New Zealand and Australia. Currently, the company has over 3000 Km of fibre optic cable laid & operational throughout Australia & New Zealand. Since its listing on ASX, VOC had acquired numerous players from the same space which includes E3 Networks, Digital River Networks, Perth IX, Maxnet Limited, Ipera Communications Pty Ltd, FX Networks and M2 group merger etc. Financials – On 7 February 2019, AGL released half-year results for the period ended 31 December 2018. As per the release, Statutory Profit after tax stood at $290 million down by 53% in 1HFY19 against $616 million in 1HFY18, which resulted in Statutory EPS contraction by 53% to 44.2 cents in 1HFY19 against 93.9 cents in 1HFY18. AGL reported that the 53% fall in statutory profits had been the result of negative fair value movements of net sold electricity derivatives due to rising forward electricity prices. As per the release, AGL had more than $1.26b of cash and undrawn debt facilities, and Baa2 credit rating with a stable output. On 27 February 2019, VOC had released half-year results for the period ended 31 December 2018. As per the release, revenue stood up by 1% to $974.2 million in H1FY19 against $967.3 million in H1FY18, and the EBITDA margin contracted by 150 bps to 18.1% in H1FY19 against 19.6% in H1FY18. Also, the revenue stood flat due to the declining revenues in Retail, which were offset by revenue growth in Vocus Networks. On 12 June 2019, AGL’s stock last traded at A$19.550, up by 0.773% from the previous close. The performance of the stock is +0.73%, -10.97% and -14.05% in six months, three months and one month, respectively. AGL has an annual dividend yield of 6.08% (as on 12 June 2019), and its year-to-date return stands at -4.43%. While, VOC stock’s closing price was A$4.300, up by 3.118% from the previous close. Over one-year period, VOC’s stock has posted a return of +83.70%, and returns for six months, three months and one month stood at +21.93%, +14.56% and +5.84%, respectively. Disclaimer This website is a service of Kalkine Media Pty. Ltd. A.C.N. 629 651 672. The website has been prepared for informational purposes only and is not intended to be used as a complete source of information on any particular company. Kalkine Media does not in any way endorse or recommend individuals, products or services that may be discussed on this site. Our publications are NOT a solicitation or recommendation to buy, sell or hold. We are neither licensed nor qualified to provide investment advice.
All pictures are copyright to their respective owner(s).Kalkinemedia.com does not claim ownership of any of the pictures displayed on this website unless stated otherwise. Some of the images used on this website are taken from the web and are believed to be in public domain. We have used reasonable efforts to accredit the source (public domain/CC0 status) to where it was found and indicated it below the image.