A Walkthrough of 3 Stocks in the Mining Sector – SYR, WHC, OZL

Mining has been a significant contributor to the Australian economy in terms of employment, royalty payments and export income. It encompasses large quantities of minerals and resources, including iron ore, nickel, copper, aluminium, gold, silver, uranium and many more.

Now, let us have a look at the recent updates from 3 ASX-listed stocks in the sector.

Syrah Resources Limited (ASX: SYR) is an industrial minerals and technology company engages in THE development of the Balama Graphite Project in Mozambique. The company recently completed its fully underwritten 1-for-5 pro rata accelerated non-renounceable entitlement offer. The offer size amounted to $55.8 million. The institutional component of the offer raised approximately $25.1 million and the retail component raised approximately $30.7 million.

In another recent announcement, the company updated that Vanguard Group became a substantial shareholder of SYR, with 5.106% of the voting power.

Sales Agreement: The company entered into an agreement with Gredmann Group in June for sales into China. Balama Graphite Operation will undertake a monthly supply of 9,000 tonnes of fines natural graphite under the agreement. The agreement will continue until December 2021 and will include a total supply of 279,000 tonnes. The company aims to boost sales in China through Gredmann’s strong presence in the country.

Q2 2019 Forecast: Recently, the company provided an update on the expected results for Q2 2019. Production in the quarter is expected to be in the range of 45kt to 50kt as compared to 48kt in Q1 2019. Graphite recovery and product split are expected to be almost similar to Q1 2019 at 69% and 86% fines to 14% coarse flake, respectively. Results from the production improvement plan are skewed towards the third quarter.

Highlights of March Quarter: During the quarter, production from Balama Graphite Operation totalled to 48kt, up 45% on the previous quarter. The production exceeded the guidance range of 45kt – 50kt. The company achieved record production of 19kt in the month of March due to increased operational stability on the back of recovery increases and improvements in equipment management. During the quarter, demand for graphite continued to be strongest from China due to robust battery segment demand. Cash at the end of the quarter amounted to US$62.4 million. 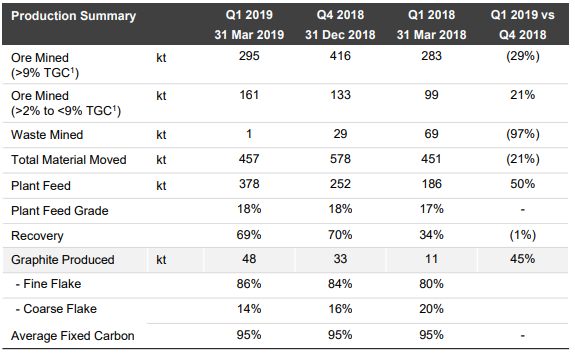 Whitehaven Coal Limited (ASX: WHC) is primarily engaged in the development and operation of coal mines in New South Wales.

The company reported a record coal production of 11.7Mt from Maules Creek, up 7% on the prior corresponding period. The strong performance was reported by Narrabri with the production of 1.9Mt ROM coal for the quarter and 6.4Mt for the full year. This exceeded the guidance by a wide margin.

During the quarter, the safety outcome for the group improved significantly with TRIFR (total recordable injury frequency rate) falling from 8.3 at the end of March to 6.16 at the end of June. Another milestone achieved during the quarter included the declaration of the Winchester South Project as a Coordinated Project by the Queensland Coordinator-General, which now allow the assessment of the project by the government by way of an Environmental Impact Statement.

Thermal and Metallurgical Coal Outlook: Demand for thermal coal has been impacted by slowing world economic growth due to the trade tensions between the United States and China. The demand was also impacted by import restrictions from China. Moreover, the decline in gas prices in Europe led to a shift in demand from coal to gas. Seaborne coal supply from Australia, Russia and Indonesia increased Y-o-Y owing to good weather and good prices. With the softening of prices in the first half of 2019, the market is expected to rebalance as high cost producers moderate production. The outlook for metallurgical coal is healthy with steel production holding up well in China, India, Japan and several other countries.

OZ Minerals Limited (ASX: OZL) is engaged in the mining and processing of ore containing copper, gold and silver. The company is also involved in the exploration activities and development of mining projects.

The company recently provided an update on the Brazilian mining assets acquired for ~$430 million.

In the Carajas province, the future of the Antas mine is considered to be limited as suggested by the mining studies and updated mineral resource estimation. The mine is expected to generate positive cash flows over the remainder of its life. The company has planned Antas pit closure in 2021. In addition, Pedra Branca ore trucking is expected to start in mid-2021.

Gurupi Province was strengthened after the completion of CentroGold pre-feasibility study, showcasing it as a 10-year open pit operation. Average annual gold production is expected to be in the range of 100koz to 120koz at an expected All-In Sustaining Cost of ~US$640/oz. Construction costs are estimated to be around US$155 million at a project NPV of approximately US$200 million.

Outlook: In Brazil, the company is confident on the capacity of the assets to add value for relatively modest capital outlay. The company expects to maintain a strong sustainable position in each province.

The company reported unaudited net revenues of circa $1,115 million for 2018. Cash balance at the end of the period stood at $505 million.