A Walk Through The Surefire Resources’ Year To Date Developments

Australiaâs Critical Minerals Strategy 2019 states that there has been a growth in the global demand for Australiaâs critical mineral resources (including vanadium) over the recent years with their increasing use in a variety of evolving technologically advanced applications across several segments such as renewable energy, aerospace, defence, electric vehicles, telecommunications, agriculture etc.

Besides, Australia seems to be well positioned as the second largest gold producer amidst investorsâ flight to safe haven avenues.

The Company progressed through considerable addition to its vanadium mineral resources and exploration assets in Western Australia by way of acquisition and operational progress at its existing base metal projects.

Let us take a drone view at SRNâs year to date activities and its progress in the metal exploration activities.

The head-start in 2019 for SRN was the signing of the Deed of Variation for the procurement of Exploration Licence 57/1036 at Victory Bore in Western Australia with Mutual Holdings Pty Ltd, High-Grade Metals Limited, and Acacia Mining Pty Ltd.

Under the deed, the parties agreed to extend the date which stated the satisfaction or waiving of the outstanding conditions for an additional 60 days till 18 March 2019 which was later extended till 18 April 2019.

On 29 April, SRN finally completed the purchase acquisition of Exploration Licence 57/1036 at Victory Bore in the mid-west of Western Australia. Moreover, SRN further issued 62,500,000 fully paid ordinary shares which were subject to a voluntary escrow for six months and paid the balance of $450,000.

Moreover, the mineralisation extended to over 22km with over 11km then untested, making the Company a significant holder of Vanadium resource in Australia.

The Company also progressed towards a Pre-feasibility Study on Unaly, while an In-Fill drilling programme had been revised and planned on the most favourable areas of Unaly mineralisation in order to delineate an Indicated JORC resource.

In addition to this, SRN designed a Programme of Work for the drilling wherein ground magnetic survey was expected to refine drill targeting within target areas. SRNâs new licence application ELA57/1112 was added to the tenement holding at Unaly.

In its latest development, SRN announced significant results from the reverse circulation drill program conducted at the Companyâs Victory Bore gold targets where drilling commenced in early September and was completed by early October 2019. 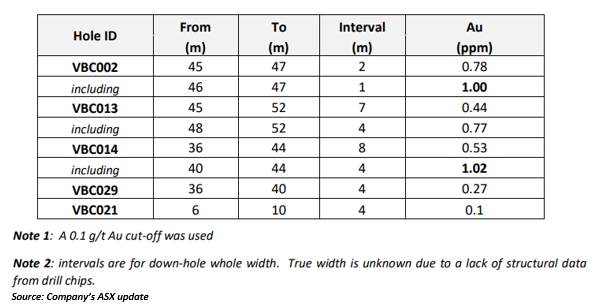 Although the maiden RC drilling program at Victory Bore yielded results less significant than some of those previously drilled, excellent potential remains along the Youanmi trend to yield further gold mineralisation and drill targets. Further work is warranted to better define these targets and increase the resolution of the anomalies through further geochemical sampling.

At its Kooline Lead-Silver-Copper- Gold Project, the Company compiled the available geophysical data for reprocessing, and it was expected that the structural interpretation for the Intra-cratonic magmatic copper-gold (IMCG) model shall be refined by the improved magnetic imagery.

Analysing the data suite and identifying multiple areas of interest, the Companyâs geological consultants provided an initial evaluation of the project area for additional exploration.

The Company has been able to produce additional geophysical data for the Kooline Lead-Silver-Copper-Gold project. Further to this, the reprocessing of data was undertaken by Southern Geoscience wherein the data provided further detail on the structure to guide the exploration.

SRN currently looks forward to considering the best method to carry out a geochemical evaluation of the targets and further plan the next phase of field programs to correspond with follow up sampling and evaluation of the pending RC drilling assays.

Backed by robust management and supported by positive commodity outlook, Surefire Resources seems to be progressing well on its project portfolio.