A.P. Eagers Limited is currently one of the largest shareholders of Australia’s leading motoring company, Automotive Holdings Group Limited (ASX: AHG). For quite some time now, APE has been involved in the discussions with AHG for a proposed merger, eying to acquire all the ordinary shares in AHG, it already does not own, by offering 1 APE Share for every 3.6 AHG Shares. APE has already released its sixth supplementary bidder’s statement related to its merger proposal.

On 5th July 2019, A.P. Eagers released an announcement stating that the company offered to divest Kloster Motor Group, an 85-year-old automotive retailer based in the Newcastle and Hunter Valley region, to assist in securing regulatory authorisation for A.P. Eagers’ proposed merger with Automotive Holdings Group Limited.

There has been speculation that the merger of these two businesses could substantially lessen the competition in the market, as A.P. Eagers and AHG both supply new and used cars, trucks and buses and associated products. A combined entity would comprise 13% of car dealerships, which is significantly larger than any other dealership group.

As per ACCC, consumers are unlikely to sufficiently constrain the combined entity from raising prices because: (A) the actual price likely to be paid is opaque; (B) online and telephone based research would be unlikely to reveal the true price that could be paid; (C) consumers will assume that different dealers have different owners (especially within the same brand) when in fact they are in the same dealer network; and (D) consumers appear to be purchasing within relatively localised areas.

The ACCC also believes that the aggregation of dealerships in the Newcastle and Hunter Valley region may also remove a potential constraint for the supply of authorised parts and technical information, such as computer access codes to independent mechanics in particular. As per ACCC, the proposed acquisition will result in increased aggregation of dealers for some brands. The ACCC is considering the extent to which this aggregation could reduce competition between dealers for servicing and increase the barriers faced by independent mechanics.

Further, dealers have expressed their views that the proposed acquisition could increase the combined entity’s bargaining power with manufacturers. It has been speculated that the combined business could gain better wholesale prices or bonuses from the manufacturers that smaller dealers unable to access. ACCC is of the view that the proposed acquisition would result in reduced price competition for new cars and will also provide both the parties an opportunity to reduce the level of discounts that they offer.

In addition, there were concerns that the proposed acquisition would reduce options for owners wanting to sell their dealerships. It has been speculated that the proposed acquisition would potentially influence the owners’ ability to sell their dealerships and reduce the price they could sell for. The increased bargaining power could enable the combined entity to direct or unduly influence manufacturers on where they could, and could not, allow new PMAs (Primary Marketing Area), to minimise new competing dealerships close to the combined entity’s dealerships.

While A.P. Eagers does not believe that its merger with AHG will substantially lessen the competition in any market, it is seeking ways to address the concerns raised by ACCC offer with the proposed undertaking to divest its dealerships in Newcastle and the Hunter Valley. A.P. Eagers expects that this divestment will help it in proceeding with the merger in a timely manner.

It is expected that the sale of Klosters will be completed in November 2019. A.P. Eagers continues to work in tandem with ACCC to finalise the undertaking and complete the merger authorisation process.

A.P. Eagers Limited Operations Update: A.P. Eagers Limited entered into an unconditional contract for the sale of its property situated at 99 Breakfast Creek Road, Newstead in Brisbane, which is expected to take place on 26th August 2019, generating a profit before tax of $26.1 million for the company.

The Newstead property is being sold to the Seymour Group for a total consideration of $61 million, which will further strengthen the company’s balance sheet.

In 2018, the company’s total revenues increased by 1.3% to $4.1 billion driven by strong trading in the Queensland, Victorian and South Australian car divisions. APE posted NPAT of $101.2 million, up 3.1% on a year-on-year basis. 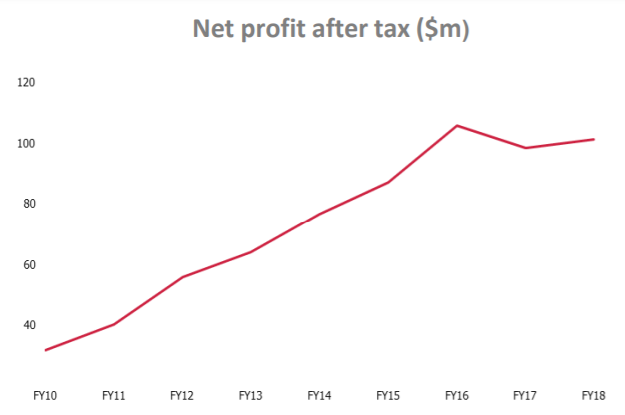 The company recently announced the sale of its interest in Motorcycle Distributors Australia Pty Ltd to the Austrian-based company, KTM Sportmotorcycles GmbH, with settlement expected to occur in July 2019. In FY19, the company expects its operating NPAT to be around $50 million, which is higher than the company’s FY2019 operating NPAT guidance of $52 million to $56 million. This revised outlook was modeled after taking into consideration the company’s trading performance for the 10 months to the end of April 2019 and the present market conditions.

With regards to APE’s offer for the proposed merger, AHG’s Board of Directors have recommended the company’s shareholders to accept the offer as both the parties (APE and AHG) believes that there is strong merit for shareholders in participating in an enlarged, merged group.