A Look at Crowd Media Holdings’ Business Model in Hindsight

A global mobile entertainment and digital media company, Crowd Media Holdings Limited (ASX: CM8) has been transitioning from a product-centric company to a platform company with an emphasis on marketing, predominately targeting millennials through technology. The company, at the right time, recognised the growing opportunities in the digital media space, hence this transition transpired. The increased focus on growing digital media space led the company to change its name to Crowd Media Holdings Limited from Crowd Mobile Ltd.

The company is focused on leveraging its technology and social media platforms to generate revenues by providing its advertiser clients market access to an audience, primarily millennials and Generation Z. 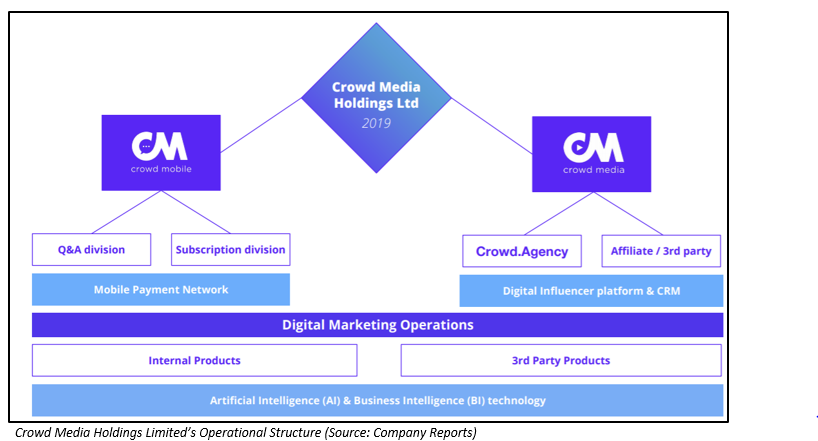 The company has two primary divisions, namely Mobile Division and a Digital Marketing division. The mobile division is primarily involved in the production of content, including apps, music, games, etc, whereas the company’s digital marketing division offers branded content to millennial and Generation Z markets.

The company’s Crowd Media division is continuing the strong growth trajectory with FY19 expected revenues of $1.7 million, up 240% (FY18 $0.5 million). The division recently executed a pilot agreement with one of the largest digital wealth companies in Europe, Moneyfarm, under which, the division will help Moneyfarm to promote its investment services through the Company’s proven digital influencer strategy. To better reflect the shifting focus of Crowd Media to the large and growing digital influencer and social media marketing sector, the company has also launched a revamped media kit.

The Crowd Media agency division works with brands and digital influencers and Crowd Affiliates works with companies to acquire customers on a cost per acquisition basis (CPA). The division has been running a pilot program with a US-based Fortune 100 company since July 2018. Crowd Media’s strong performance has been achieved by accelerating its ability to capture global growth opportunities in the digital influencer market space, leveraging the global distribution and expertise it has built up in the past six years in social media marketing with the Q&A division.

Crowd Media division more than doubled its entire FY18 revenue in the first half of FY19. In FY18, Crowd Media revenues were $0.5 million from a zero base and the company reported $1.3 million in revenues for first six months of FY19, up 160% compared to the same period last year. Crowd Media has identified a number of verticals, including Travel, Lifestyle/Fashion, Fintech, Cannabis/CBD Oils, eSports and gaming as targets for further client growth.

Till now, the company’s media division has worked with over 10,000 digital influencers worldwide.

Q&A and Subscription businesses are part of the company’s mobile division. The company is currently a leading provider of Q&A entertainment and technology services; and via its Subscription Products, the company delivers mobile content, including games, mobile security, applications to millions of its consumers.

It expected that the Q&A division performance will further improve down the line due to the launch of its products in the new countries like Asia and Latin America. Further, the company will reap the benefits of improved margins due to Artificial Intelligence and a soon to be launched new Q&A app in the USA market while reducing its operating expenses within the division at the same time.

The Q&A division continues to test product pivots, leveraging its proprietary Artificial Intelligence (AI) technology. AI is now responsible for answering more than 60% of all questions, which will help improve operating margins.

The company’s subscription business is currently focused on executing multiple new products and market opportunities in an attempt to return the division to a growth profile.

The company has continued to partner with telecommunications companies all over the world, giving them access to their billing platforms and allowing the rollout of its mobile payment technology.

The company’s mobile division is currently operating in more than 60 countries and 30 languages.

Following the strategic review and the expense reduction program in the first half of FY19, the company implemented a range of aggressive cost-cutting measures, which will result in an estimated annualised cost savings of $3.5 million in FY19. The company is implementing these cost-saving measures with the objective of moving the company back to profitability (effective this month), as stated in various ASX releases.

The company has already reduced $1.4 mn in annualised costs which is related to the employment costs in the recent redundancy round.

Recently, the company entered in a Convertible Securities Agreement with Obsidian Global Partners, LLC as per which investor was supposed to invest up to $1.5 million across two tranches and in return the company had to issue convertible notes.