A Look At 2 Diversified Small-Cap Stocks; RHP And AMS

Let’s have a look at two diversified small-cap stocks RHP and AMS.

The information technology sector company, rhipe Limited (ASX: RHP) is engaged in the support and sale of subscription software licenses in the Asia Pacific region to more than 2,500 IT service providers. Recently, the company communicated to the market via a release its trading update about the public cloud business. As per the release, public cloud is an integral growth driver of the company’s business, where it has made substantial investments over a period of last four years.

To put things into perspective, the company has crossed 0.5 million mark for Office365 seats, with current seat count stands at more than 530,000, including around 100,000 academic seats. The company’s Office365 seat count, excluding the academic seats, rose by more than 65% or 170,000 seats since the beginning of the financial year. In addition, 40% of the growth is being delivered by the fast-growing activities throughout Asia and around 60% of the growth in the seats is delivered in the Australian market.

Turning to the financials of the company. In 1H FY19, the profit after tax stood at $3.0 million, witnessing a rise of 181% on pcp. 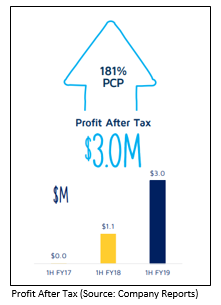 Previously, the company made an announcement related to the daily share buyback totaling to maximum 13,504,994 shares.

On 19th June 2019, the company provided a guidance update for FY19 and preliminary guidance for FY20. According to the report, the company expects operating profit to be more than $12.5 million for FY19.  The company will continue to invest in the business in the FY20 with an expansion in the operating expenses in order to fund sales growth, marketing and the company’s own intellectual property initiatives as a result of the potential for future growth and the strong results delivered by the company. Furthermore, the company projects the operating profit to be around $16 million, ex-any changes in the market conditions or any vendor expansion opportunities and geographical expansion.

Atomos Limited (ASX: AMS) is a global software and hardware technology company, which develops, creates and commercialises the video monitors for a rapidly growing video content creation market. It was officially listed on ASX in 2018. Recently, the company made an announcement related to the release of 94,764,138 ordinary fully paid shares from voluntary escrow on 28th June 2019.

The company recently rolled out its Neon series HDR cinema monitor recorder. The objective behind the launch was to target high-end entertainment market, which has been identified as one of the growth markets for the company. This is the world’s first monitor recorder with the capability of 8K ProRes RAW recording by upgrading with the Neon 8K Master Control Unit. Furthermore, the Neon series comes in four different screen sizes, i.e. 17”, 24”, 31” and 55”. The Neon products can be synced in order to provide an ecosystem of field monitors, wherein the accuracy and consistency of image are critical. Together with the three new products released earlier in 2019, with the addition of Neon series represents the two-fold increase in the number of company products in a time of six months.

Moving to the financial side of things. In 1H FY19, the company reported revenues of $24.2 million, witnessing 32% growth on pcp and gross profit of $10.5 million, reflecting 26% growth as compared to the prior corresponding period. In terms of the statutory cash flows, the net cash flows for the period were in line with the forecast. The growth in working capital was driven by successful rollout of Ninja V products, including building in inventory to satisfy demand and debtors growth resulting from strong sales.  The Ninja V continues the company’s push into the swiftly growing Social segment of the video market. By the end of 1H FY19, the company finalised the license agreement with RED.com LLC and won multiple awards, including the prestigious Red Dot Design Award for Ninja V.

The gross margin and EBITDA margin of the company stood at 43.4% and 6.8%, respectively in the 1H FY19, with the liquidity position (Current ratio) of 2.15x. (Source: Thomson Reuters)

Recently, the company updated the market with its FY19 guidance, wherein it is expecting the revenues to be more than $50.0 million when compared to the prospectus forecast of $42.2 million. In addition, it is estimating 2H FY19 pro forma EBITDA to be broadly in line and ahead of expectations with 1H FY19 pro forma EBITDA of $0.7 million.