A leading indigenous Papua New Guinean firm, Aiabba Minerals Ltd focusses on exploration and development of mineral resources in the country, following a concept of partnership in the mining industry with local communities for favorable environment for investment.

The locals of Papua New Guinea are major shareholders of Aiabba Minerals, holding about 83.5 per cent share. The company has undertaken unique concepts such as partnership with local communities, that involves the provision of 10 per cent equity interest-BFS to the locals in order to prevent and handle social, community and any political risk.

Currently, the company is centered on conducting intensive exploration on its flagship property, the main Malaumanda gold and gold copper project to ultimately advance it for the shareholders’ benefit. The license was granted renewal in October 2019.

Aiabba’s business plan is to explore and develop the Malaumanda exploration project, that holds world class potential, moving to production within a short span of time. The core assets of the company primarily consist of a portfolio of gold and gold-copper target exploration properties in Papua New Guinea, located on the New Guinea Thrust Belt.

New Guinea Thrust Belt demonstrates the convergent boundary between the Pacific Plate, to the north side and the Australian Plate, to the south side, hosting major outstanding deposits:

Grasberg and Lihir are first and the fifth largest gold producers of the world, respectively. 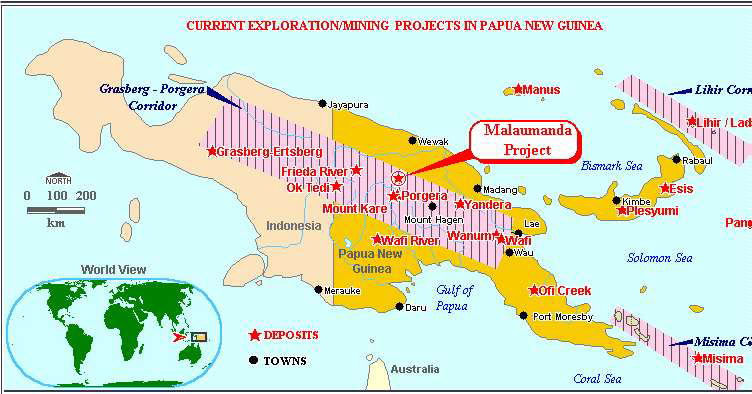 Aiabba acquired Malaumanda project from the indigenous firm, the Malaumanda Development Corporation Ltd in May 2017, with Exploration License EL2421. The company further packed EL2586 & EL2587 (license applications) has high copper gold potential where a float assay returned 30% copper surrounding the existing license area, that could take the total area to 3,085km2. The license applications have already gone through the Mineral Resources Authority (MRA) board. The company has acquired 80 per cent interest on EL2421 from the 12 clans (corporation) of the indigenous community and 90 per cent each of ELA2586 and EL2587.

Historically, twenty-three drill d/holes provided high gold values of 4.45g/t at 10m and 10g/t at 20m from Milikap and Lodon zones. As per the company, a 500g/t gold plus 5.9 per cent copper from a float boulder down from adjacent hill also imply a high potential for a world class deposit.

Progress So far at Project

Aiabba had already compiled previous exploration data (comprising landowner liaison and major restructuring of the company) from late 2016 to July 2017 during its first year of tenure. The company had interpreted the airborne survey on EL2421 and adjacent properties using the 2012 Southern Geosciences Geophysics Interpretation Report, as represented in the below figure: 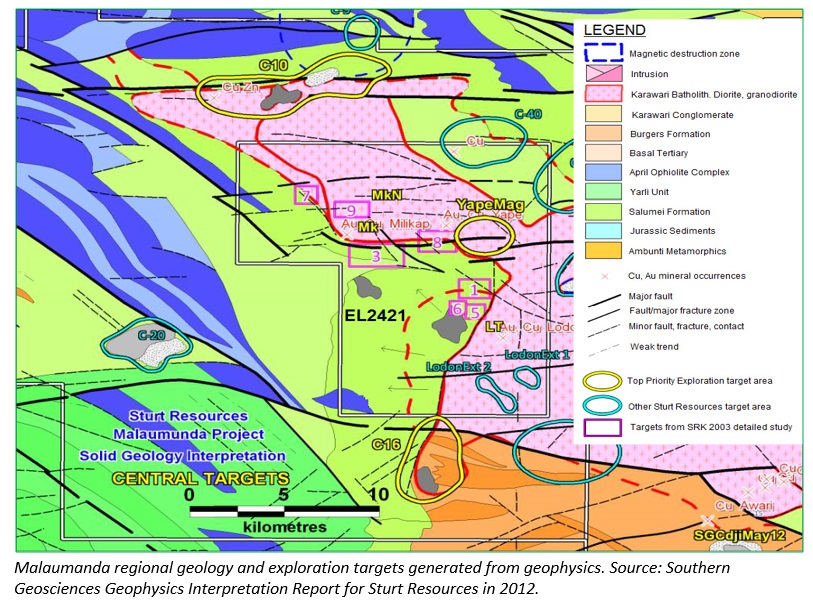 As of now, the company’s key focus areas include aggressive exploration on Malaumanda project, followed by the commencement of resources calculation.

For resources calculation on EL2421, the company is planning to get listed on the Australian Stock Exchange, raising finance at both international and the local level (as feasible) via corporate and individual investors.

The company intends to raise A$3 million via seed capital to immediate develop the placer deposit resources value USD 22 million, representing just 15 per cent of the total 20,000 m2 area focus for mining alongside Korosameri river section.

Production from the alluvial is likely to help the company in meeting its financial obligations for the development of its tenements and with an objective to acquire a new drilling rig and proceed with the IPO for resource calculation on main Malaumanda/EL2421.