A Glance At the FY19 Performance of Financial Players: SDF and PTM

We have been striving to maintain the excitement of the reporting season and aim to pave an easier path for Australian equity market enthusiasts and investors. Complying with the same, we would highlight the earnings report and stock performances of two financial players, listed and trading on the ASX. Before acquainting ourselves to the same, let us understand these companies in discussion:

Like several other Australian players, PTM fell prey to the current US/China trade war, which is posing a bleak prospect for future global economic growth.

PTM recently released its report for the year ending 30 June 2019 recording $24.8 billion FUM, down by 3.6% on pcp. This was post considering the impact of the 30 June 2019 net distribution outflow of $0.8 billion. The Average FUM for the year was down by 4.1% on pcp and stood at $25.3 billion, majorly attributable to fund outflows of $246 million. Amid these fund outflows, the absolute investment return was positive at $224 million. 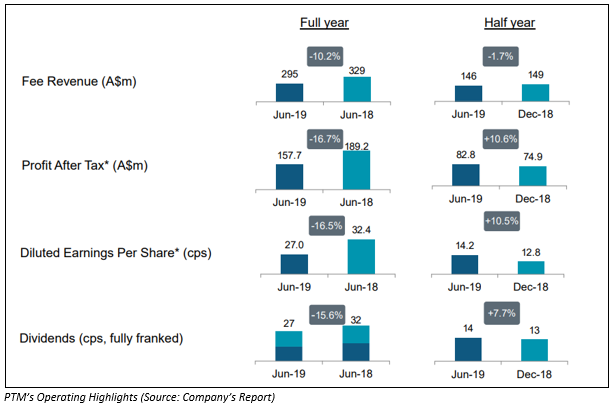 PTM witnessed an overall decline in profits attributable to owners of 16.7%, catalysed by the challenging equity markets, as a result of which, unrealised loss was recorded on its seed investments of $988,000 along with little in the way of absolute return related performance fee income.

PTM declared fully a franked dividend of 14 cps, which would be payable on 20 September 2019, and ceased from activating the DRP.

A highlight for the year was the establishment of a distribution office in London, which is likely to strengthen PTMâs efforts in establishing a European business. Moreover, the company was not part of the Hayne Royal Commissionâs scrutiny and was vocal in advocating for the much needed change in the wealth management sector.

On 21 August 2019, SDF reported its strong FY19 results catalysed by its organic and acquisition growth of its equity brokerages and underwriting agencies. The company pleasingly stated a 17.8% increase in underlying EBITA and 19% increase in its underlying NPAT.

Moreover, $100m institutional placement and SPP was also announced. Today, the company announced the completion of placement by issuing 29.6 million shares at a price of $3.38 per share. The share settlement is expected to take place on 27 August 2019. The company reiterated its intention to offer new shares the opportunity to purchase new SDF shares at a price equal to the lesser of $3.38 (placement price) or 1% discount to the VWAP of SDF shares as traded on the ASX over the five days to 12 September 2019 (SPP closing date).

The gross written premium witnessed a growth of 16% on pcp, being $6.1 billion in FY19, driven by moderate price increases by insurers and an increase in volumes and new brokerages. Steadfast Underwriting Agencies delivered over $1 billion for the first time in FY19 of GWP. 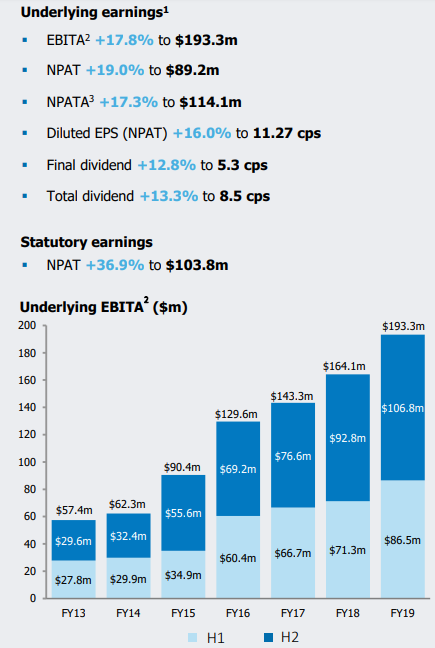 As on 30 June 2019, $90 million was available as Unutilised debt facility for the future growth of the company. Debt facilities were increased by $100 million to $385 million in October 2018, and the maturity date was extended by a year to August 2021.

A highlight of the result was the addition of 21 new brokerages, bringing the total count to 398 across Australia, New Zealand and Singapore, maintaining SDFâs stance as the largest general insurance broker network in Australasia, as per the companyâs and APRAâs Statistics of December 2018.

Moreover, the Underlying EBITA acquisition growth was $11.3 million. The company also underwent successful acquisition of the remaining 50% interest in IQumulate Premium Funding, to finally hold 100%. The change would result in up to ~$515 million of premium funding borrowings and payables after the FY19 year-end.

Another highlight of the year was the Bid Implementation Agreement with IBNA Limited, an Aussie general insurance broker network. As per the terms, the company would make a takeover offer for up to 100% of the fully paid ordinary shares in IBNA on the terms set out in the BIA. The IBNA shareholders are expected to receive 2.54 new SDF shares for each IBNA share, and the FY20 guidance assumes a minimum of 80% take up by these shareholders.

The stock of the company was placed in a trading halt on 21 August 2019 due to capital raising announcement, resuming trading on 22 August 2019 post the release of placement update.

Share Performance and Returns on ASX: Post the release of the much-anticipated earnings reports by these two companies, let us look at the performance of their respective stocks in the market, after the close of trade on 21 August 2019: