Based in South Yarra, Victoria, Alice Queen Limited (ASX: AQX) is an ASX-listed public company that focusses on the exploration and development of assets rich in gold and copper in its home country, Australia. The company holds a majority stake of 84.5 per cent in its flagship gold project, Horn Island, in the Torres Strait, Queensland, in addition to a 90 per cent stake in a New South Wales project, namely the Mendooran copper/gold porphyry project. The Kaiwalagal project in Torres Strait (84.5 per cent stake) and the Yarindury project in New South Wales (90 per cent stake) are the other two projects of the company.

Recently, Alice Queen updated the market regarding its activities during the quarter ended 30 June 2019 on 31 July 2019. Some of the major developments have been detailed below:

On 12 June 2019, the company announced an addition to its board, with the appointment of Mr Andrew Muir as a Non-Executive Director, effective immediately. As an experienced gold geologist and finance executive, he is expected to aid the company in its strive towards progressing the Torres Strait gold project, Horn Island and the Mendooran gold project in New South Wales towards producing operations.

Mr Muir, who is also the MD of Australian gold exploration player NTM Gold Limited (ASX: NTM), has previously worked as an associate director within the corporate team of Argonaut Capital. Moreover, he holds the experience of working as a resource analyst for JP Morgan, Hartleyâs and PCF Securities.

A summary report, published in May 2019, from soils sampling and an assessment of the multi-element geochemical database have further strengthened the potential of Horn Island as a large-scale gold project.

According to the geochemical survey carried out by Queensland gold consultant Dr Gregg Morrison, the gold system surface footprint not only covers majority of the project, but also includes several gold mineralised structures. A younger gold-antimony-lead-zinc-arsenic system controlled by structures (approximately 310 Ma) and an older tin-tungsten-molybdenum system controlled by the host granite (approximately 340Ma) were recognised as the two discrete hydrothermal systems at the project.

Additionally, review of the entire surface and drill hole multi-element geochemical database has been concluded. Moreover, the company unveiled the completion of metal zonation modelling, using a Max Z score calculations, which confirmed the geometry and likely extensions of the near surface gold envelope at SSR and Horn Island gold deposits. 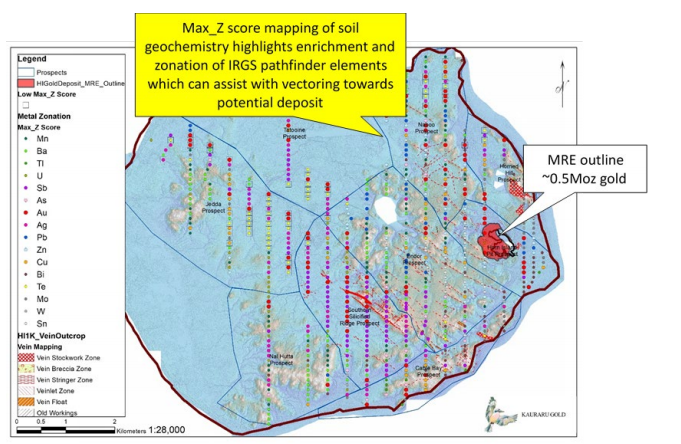 Kauraru Gold Pty Ltd, which is an 84.5% owned subsidiary of Alice Queen Limited, entered an earn-in and joint venture agreement (EIJVA) with Australia-based mid-tier gold producer St Barbara Limited (ASX: SBM) in June 2019. According to the market update on 5 June 2019, the EIJVA gave SBM the right to earn an interest of 70 per cent in AQXâs flagship project, Horn Island project, with SBM required to make a sole funding expenditure of $ 4 million on the project within three years.

However, the Horn Island Pit area, in addition to the area that is the subject of the companyâs existing inferred mineral resource (IMR) of 7.96 million tonnes @ 1.9 grams per tonne of gold for 492,000 ounces have been excluded from the earn-in rights. The area subject of the earn-in rights does not include several other areas of EPM25520. It excludes historical ore stockpiles that are of low grades, alluvial target areas located across the island, waste dumps, tailings dams and other historical infrastructure, in addition to the process water dam. 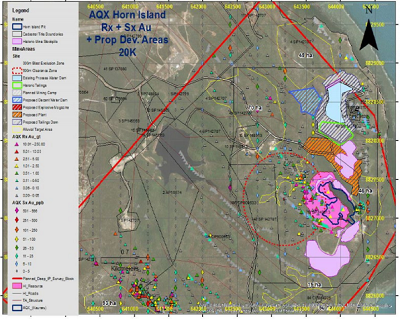 Meanwhile, Alice Queen keeps the right to carry out its exploration activities on the project through to bankable feasibility study (BFS) in the excluded areas. As part of the arrangements between Kauraru Gold and St Barbara, Alice Queen has guaranteed the obligations of its subsidiary.

Meanwhile, commenting on the EIJVA, Alice Queen Managing Director Andrew Buxton said the two companies â AQX and SBM â would work closely to explore as well as develop Horn Island into a profitable gold mine. According to the company, St Barbara has the technical capability and financial security in addition to operational flexibility to aid AQX in realising as well as maximising the potential hosted by the Queensland gold project, Horn Island.

During the quarter ended 30 June 2019, the company also unveiled the identification of six priority target areas at the Yarindury highly prospective Cu/Au porphyry project, which is believed to host early Silurian-Ordovician rocks of the Molong Volcanic Belt of the Macquarie Arc.

The target areas, with attractive magnetic and gravity features for a porphyry setting, have been generated with an interpreted basement depth of less than 200 metres in the north western part of the tenement. If required, these features could be tested by a RC drilling with a core tail. 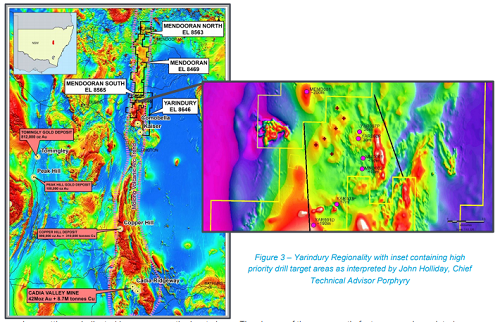 The June quarter was laden with activities and AQX further built on the momentum. On 14 August 2019, the company announced that it received strong commitments from investors to raise $516,000. The funds thus raised would be used to support the initial drilling program at Yarindury. On 20 August 2019, the company started the maiden drilling program as part of its JV with St Barbara.