Resource explorer based in Australia, Blina Minerals NL (ASX: BDI) has recently released its quarterly activities report for the three-month period ended 30th September 2019. The company attained a significant milestone during the quarter by signing a binding agreement to acquire 50 per cent stake in Colour Minerals Pty Ltd, the owner of the Barkly Copper-Gold-Bismuth Project.

The company executed a legally binding agreement with Colour Minerals Pty Ltd in September to obtain 50 per cent interest in the Barkly Cu-Au-Bi Project.

The Barkly Cu-Au-Bi is situated at around 45km to the east of the town of Tennant Creek in Australiaâs Northern Territory and comprises of two Exploration Licences, Barkly EL 28620 and Babbler EL 30701. The Barkley-Babbler project is considered largely prospective for magnetite hosted gold-copper, resembling other deposits located in the Tennant Creek Goldfield.

Blina has completed due diligence and issued 861 million fully paid ordinary shares to Colour Minerals and agreed to spend $3 million on exploration to obtain the interest.

Under the transaction, BDI acquired 50 per cent of the issued share capital of Colour Minerals from its only shareholder, Kalgoorlie Mine Management Pty Ltd (KMM).

The transaction involved issue of 861 million fully paid ordinary shares by the BDI to KMM, satisfying the consideration of $645,750. Consequently, KMM has become a significant shareholder in BDI, holding about 15.79 per cent of the companyâs issued share capital on an undiluted basis.

After completion of the Stage 1 Exploration Period and dependent on BDI satisfying the funding commitment, KMM and the company will negotiate in good faith and use best endeavours to review the commercial terms upon which the company may increase its stake in Colour Minerals from 50 per cent to 75 per cent.

Following the completion of the acquisition, the company will be granted the right to hire the nominee to the Colour Mineralsâ board.

The company has planned to initiate RC exploration drilling program of 6 holes for 1,320m at Barkly Projectâs highest priority target, Bluebird Prospect, in the first week of November 2019.

The company also holds interest in Diakouli Gold Project that is situated in one of the most premier locations, Burkina Faso. The project is a joint venture in which the company has the right to obtain 80 per cent interest by spending USD 1 million over a period of four years.

Commencement of RC Drilling Program at Bluebird Prospect in Near Future

Recently, the company notified that it is likely to commence Reverse Circulation (RC) exploration drilling program at Bluebird Prospect shortly. The partially drilled Bluebird Project is very similar in style to IOCG style iron oxide-copper-gold-bismuth deposits at the Peko mine which produced 3.6 million tonnes at 3.5g/t Au and 4% Cu.

The company has also begun a review of previous geophysical work to focus on additional exploration targets.

The exploration drilling that has been recently carried out at the Bluebird Prospect returned considerable Au-Cu-Bi mineralisation intersections, summarised in the below table: 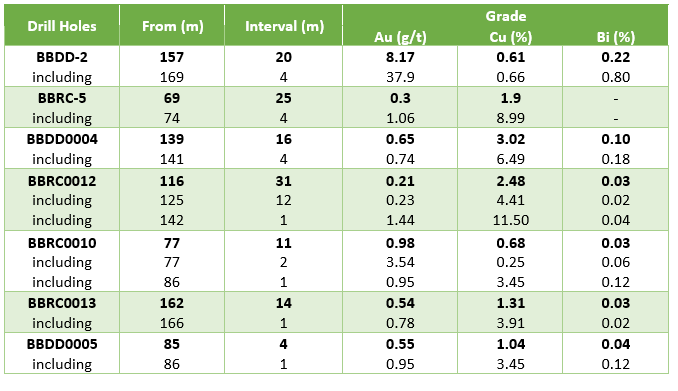 Entered into an Instrument of Transfer for Condamine Investment

Blina has recently entered into an instrument of transfer to sell its investment in Condamine Resources Limited, via the sale of 2.08 million shares and 2.6 million options at a price of 10 cents per share. The company will use the proceeds from the sale ($208,333) for working capital purpose and for funding the Barkly projectâs drilling program.

BDI notified that Condamine is experiencing delays in commencing its exploration activity and listing, stimulating the company to pursue other opportunities.

BDI reported a cash balance of $0.19 million at the end of September quarter. The company has estimated a total cash outflow of $0.16 million for the next quarter, with $65k likely to be spent on exploration and evaluation activities.

Blina achieved a key milestone during the September quarter via a strategic acquisition of Colour Minerals Pty Ltd, which presented the company with an opportunity to progress exploration on a high-grade Gold Copper project in Australia this year.