The technology sector in Australia is seeing rapid growth with the introduction of new technologies and entry of new app developers in the space. According to the media reports, the country has become a target for investments with the adoption of cloud computing services for digital transformation at corporate and government level. As a result, the sector has also created room for new jobs across multiple qualifications.

The company recently provided an update regarding the Board and Executive leadership of the company. Anthony Eisen was appointed as the CEO and MD of the company. Elana Rubin, currently an Independent Non-Executive Director, will serve as the Interim Chair until new Chairman is appointed. Frerk-Malte Feller was appointed to the role of Global Chief Operating Officer.

As per the recent business update, the company reported underlying sales amounting to $4.7 billion in the 11 months to 31st May 2019. The sales reported an increase of 143% on the prior corresponding period. The number of active merchants also increased to 30,600, up 32% on 31st December 2018.

The company continued to grow in the United States and acquired over 1.5 million active customers in just one year. Underlying sales from the US amounted to approximately $780 million. Additionally, the platform also completed a soft test in the UK market recently and is now operating under the Clearpay name.

During the first half of the financial year 2019, underlying sales for Afterpay amounted to $2.3 billion, up 147% on the prior corresponding period sales of $0.9 billion. The period was characterised by a strong balance sheet with an equity capital raising of $142 million completed in September 2018.

Appen Limited (ASX: APX) provides quality data solutions and services for AI and machine learning applications for the tech-based organisations. The company recently announced that it will be releasing the earnings update for the half year ended 30th June 2019 on 29th August 2019.

The company lately acquired Figure Eight Technologies Inc., a machine learning software platform in the month of March. The company expects this acquisition to be accretive and expand its customer base.

During the year ended 31st December 2018, the company generated revenues amounting to $364.3 million, up 119% on the previous year. Underlying NPAT for the period was reported at $49 million, up 148% on the previous year. The companyâs underlying EBITDA amounted to $71.3 million, witnessing a rise of 153%. The company witnessed a strong performance in the last quarter of the year with high revenue growth and margin expansion from the Content Relevance division. The company also declared a full year dividend of 8.0 cents per share, up 33% on 2018. 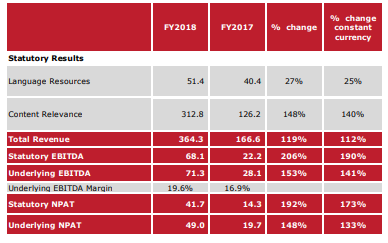 Recently, the company also completed the acquisition of Xware, a provider of messaging integration solutions, to improve its messaging gateway and enhance the control over future development. In addition, the company fabricated various other acquisitions to expand its global footprint, including those of DataFreight, Multi Consult, Taric, CargoIT, etc.

During the first half of the financial year 2019, the company reported total revenues amounting to $156.7 million, up 68% on the prior corresponding period. The performance during the period when compared to pcp was characterised by a recurring revenue of 100% for CargoWise One platform, annual attrition rate of less than 1% by CargoWise One customers, rise in EBITDA of 52% to $48.5 million and EBITDA margin of 31%. During the period, the company generated net profit attributable to shareholders amounting to $23.1 million, up 48% on pcp.

FY19 Guidance: In the month of February, the company acquired Containerchain, a container optimisation solutions provider in the United States, Europe and the Asia Pacific. As a result of the acquisition and the growth experienced during the first half, the company revised its FY19 revenue guidance to be in the range of $326 million to $339 million, with a growth rate of between 47% to 53%. EBITDA guidance for the year was also revised to be between $100 million to $105 million, with growth in the range of 28% to 35%. 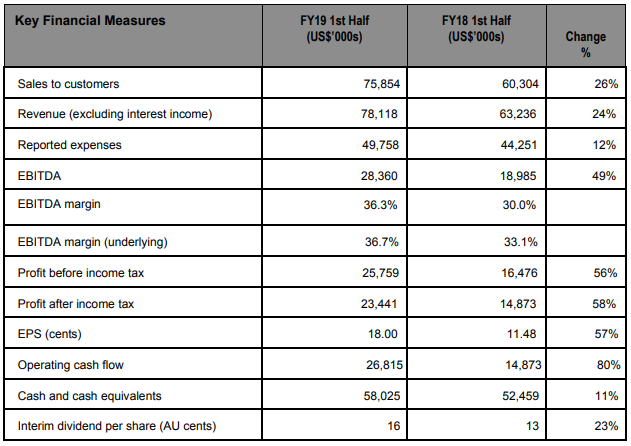 The strong growth during the period was led by a 49% increase in revenues from China. The companyâs subscription pool during the period grew at a rate of 9% with 39,179 subscribers. Board and Systems reported a positive growth across all regions, with revenues amounting to US$58.4 million, up 17% on pcp.

Nearmap Ltd (ASX: NEA) is engaged in the business of online aerial photomapping through its wholly-owned subsidiaries, Nearmap US, Inc., Nearmap Remote Sensing US, Inc., and Nearmap Australia Pty Ltd. The company recently updated the market about the reduction in the number of options on issue by 12,500 options due to the lapse of unexercised employee share options. As on 1st July 2019, the company had 16,337,184 options on issue.

During the first half of FY19, the company reported revenues amounting to $35.5 million, up 45% on the prior corresponding period revenues of $24.4 million. The growth rate of revenue during the period was double the growth rate of the group expenses. Gross margin for the period increased to 82% from 80% in pcp, as a result of contributions from the US. EBITDA for the period was reported at $8.1 million, depicting an increase of more than 100% on the prior corresponding period due to operating leverage of the SaaS business model and positive margin impact of the prior year investments. 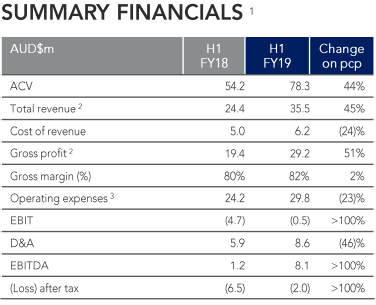 In the light of the recent discussions at G20 in Japan related to the growing impact of technology on society, the spread of terrorism content over social media and the all-out ban on Huawei, the Australian government is under scrutiny on its inability to move beyond the surface level victories.

The Australian Prime Minister, Scott Morrison during discussions at the G20 in Japan, issued a statement regarding the violent terrorist content being spread across the social media platforms. As per the media reports, a report of digital platforms inquiry into the ability of new legislative measures to limit the power of Google, Facebook and other social media platforms, has been submitted to the government by the Australian Competition and Consumer Commission. The response of the government to the above steps is still awaited, which will demonstrate its determination to combat such practices. The issues regarding artificial intelligence and automation that can significantly impact society, also remain unaddressed.