4 IT Stock With Latest Updates

The below-mentioned stocks have recently come up with significant updates. Let’s take a closer look at these updates as well as the recent financial and stock performances of these stocks.

The company’s international activities are largely concentrated in Corporate Markets, with operations in New Zealand, the Philippines, Hong Kong, India, Dubai, Papua New Guinea, South Africa, Germany, France and the United Kingdom. The company has built strong market positions in all these locations.

On 18th June 2019, the company made an announcement stating that it has increased the duration of its contract with AustralianSuper, a major client of the Link Group, for further four years. It is expected that this contract extension will help both the companies in building their existing partnership to address an ongoing strategic agenda.

In an Investor Presentation published on 18th June 2019, the company provided an outlook for FY19, wherein it has communicated that the company is currently optimistic about the medium to long term opportunities despite short term headwinds.

The company earlier communicated that due to the lack of finality regarding the Brexit outcome in the UK, the sentiments of Link Asset Services are getting impacted, which is contributing to the lower levels of business-related activities.

In the first half of FY19, the company reported a statutory net profit after tax (NPAT) of $186.8 million, which was 187% higher than the previous corresponding period (pcp). The increase in NPAT was largely related to the inclusion of LAS as well as a one-time benefit from the revaluation of the initial 19.8% equity held in PEXA. Further, the company reported operating EBITDA of $185.4 million and operating NPATA of $107.8 million. 49% of the company’s revenue was obtained from outside of Australia and New Zealand. 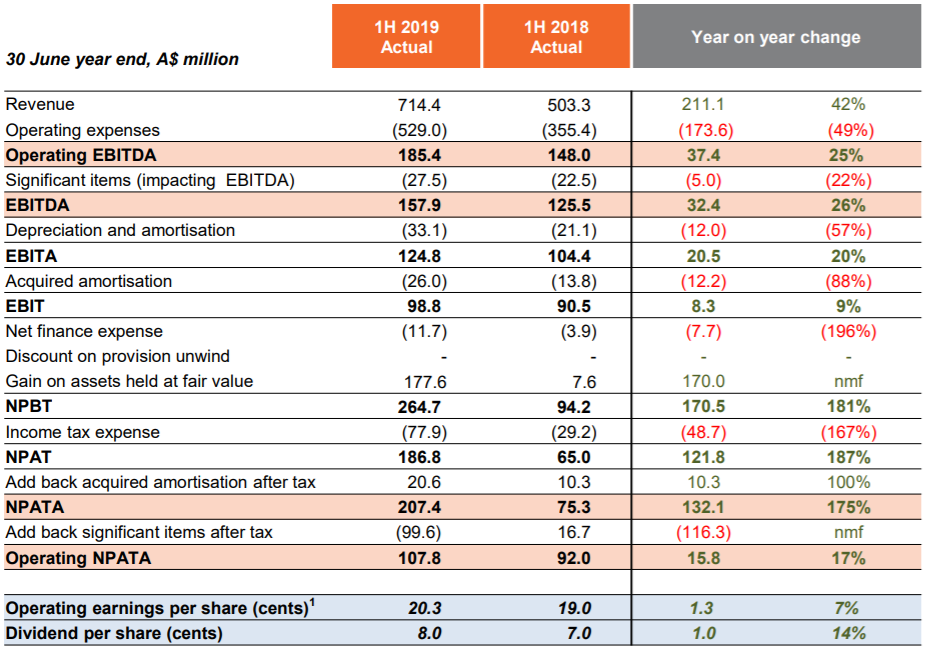 In the half year period, the company’s net finance expense increased substantially, reflecting a more normal level of gearing during the period. The net finance cost in the pcp benefited from a significant net surplus cash position during the four months to November 2017, following the capital raise in July 2017 and prior to the completion of the LAS acquisition.

The company has determined an interim dividend of 8.0 cents per share for shareholders, which will be 100% franked and paid on 9th April 2019. During 1H 2019, the company’s attention was on supporting client migration activity and restructuring activity across the Fund Administration and T&I business units.

Link Group EMEA has a market leading position in Europe across three business lines and is operating across eight highly regulated jurisdictions. 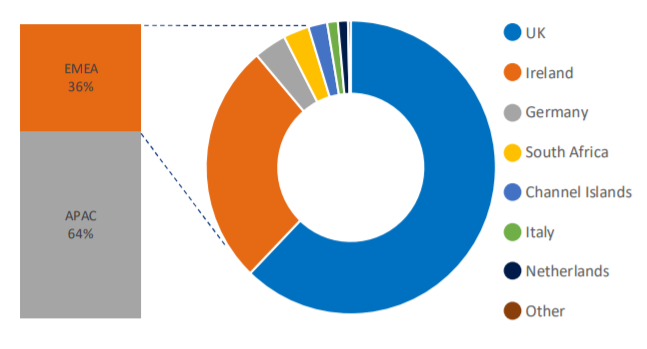 Link Group EMEA currently administers and safeguards over £200 billion of assets and serve more than 2,500 customers, including some of the world’s largest corporations.

The company recently provided an update on the sale of Link Asset Services’ Corporate and Private Clients business, where it has advised that all the regulatory approvals have been received and now, the completion is expected to occur on 28th June 2019. The money received from the sale will be strategically used to decrease the company’s debt in order to provide a stronger and more flexible balance sheet.

In an update provided on 20th June 2019, the company informed that in FY17, on average, its customers had 5.1 out of 14 products. The company now expects this to increase to an average of 8.1 products per customer by FY27, which will generate $420 million ARR. The company’s APAC market penetration does not exceed 15%, hence, there is a significant room to grow in the future years.

In the UK, the company witnessed strong momentum in the first half, with new customers acquired, and the UK loss has reduced from $3.2 million to $900k for the half-year, which is an encouraging piece of news for the company and its shareholders.

On the back of strong half year results, the company increased its dividend to 3.15 cents per share for the half year period, up 10% on the prior year. 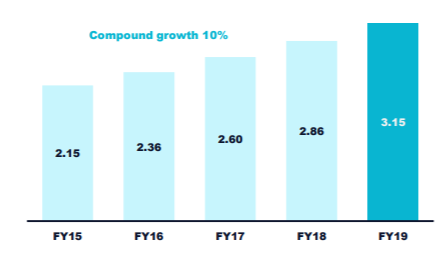 In the first half of FY19, the company reported revenues of $90.8 million, which was 17% higher than the previous corresponding period. Further, the company incurred a statutory net loss after tax of $3.1 million in the half year period. 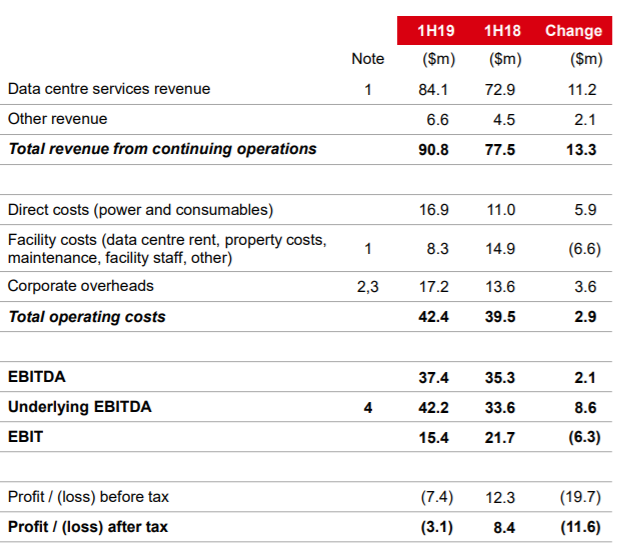 In FY19, the company expects its revenue to be in the ambit of $180 million to $184 million and underlying EBITDA to be between $83 million to $87 million. Further, the company anticipates strong demand for connectivity solutions in the second half.

Earlier, the company won a material IKE Analyze contract for approximately $0.4 million, successful delivery of which will result in sales into other US regions with this large Tier-1 operator.