To improve the quality and self-sufficiency of its baby formula industry, China has unveiled a plan to increase the proportion of domestically manufactured baby milk powder sold in China. The country has set a target to become 60 per cent self-sufficient in the infant formula space within next three years. According to market analysts, the current share of the domestic baby powder is around 47 per cent.

What is Infant Formula?

Infant formula contains a variety of nutrients like fats, vitamins, minerals, carbohydrates, proteins and others (prebiotic, linoleic acid, and others). It is used as an alternative to breastfeeding and fed to babies for their complete development.

Under the recent plan released by China’s top economic planning agency, the National Development and Reform Commission (NDRC) and several other ministries, strict standards will be adopted by the authorities for the supervision of infant formula sector; producers will be urged to adopt higher standards than the minimums. Action will be taken in areas like innovation, quality control and standard setting.

Chinese companies would be encouraged to buy foreign producers under NDRC’s plan and set up their own production overseas. The government will offer financial incentives like funding assistance and tax cuts, to promote Chinese firms to make acquisitions overseas. The plan ensures to strictly monitor any kind of potential threats in the manufacturing process or supply chain. Stringent regulations will be imposed on imported milk powder and online sales platforms under the plan.

The move aims at encouraging Chinese consumers to turn back towards locally made products and squeezing foreign players out of both ends of the supply chain.

China turned towards the imported infant formula products after the 2008 Chinese milk scandal in which the local infant formula was found to be adulterated with melamine. The scandal led to the death of several children and sickened tens of thousands of others. In 2018, the country reduced the permitted number of milk powder products by 1,400 in a move to protect the domestic brands that got damaged by the milk scandal.

The plan announced by China has affected the Australian companies supplying infant formula products in the Chinese market. The Chinese government is encouraging its citizens to buy more local products, fuelling fears of losing demand among the Australian exporters.

Let us have a look at these four companies in more detail:

Founded in 2000 in New Zealand, A2 Milk Company Limited (ASX: A2M) is a premium branded nutritional company that uniquely focuses on products containing the A2 beta casein protein type. The company has products and trading activities in New Zealand, China, Australia, the UK, the US, and several emerging markets in Asia.

The company launched its products in China in 2013 and has been building strong brand awareness and market position in the country since then.

The company reported record financial results in 1H19, continuing its strong momentum. The Group’s revenue and the EBITDA stood at $613.1 million and $218.4 million, respectively during the period. The Net Profit After Tax of the company stood at $152.7 million, with a rise of 55.1 per cent in comparison to 1H18. 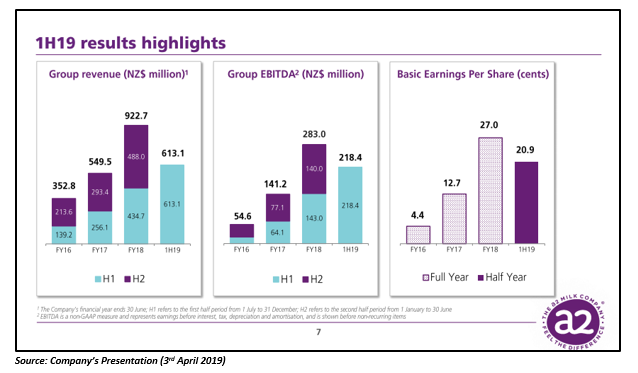 Revealing that it has gained market share at home and in China in infant formula, the company recently confirmed its full-year guidance and has framed plans to double its marketing spend in the second half.

In its recently announced quarterly activities report for the quarter ending 31st March 2019, the company reported strong revenue growth of 103 per cent relative to prior corresponding period, driven by the infant formula sales to China. The company reported that its overall direct sales to China increased 884 per cent year-on-year, demonstrating well-execution of its route-to-market strategy. 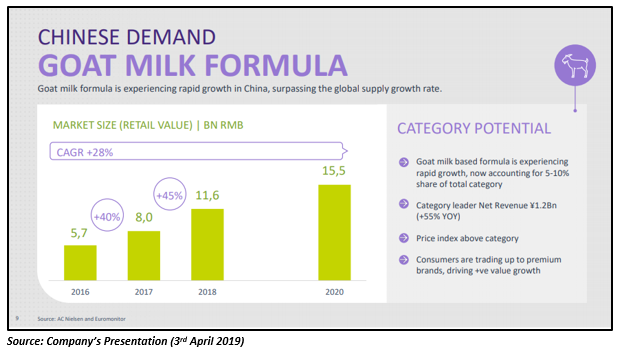 In March this year, the company partnered with Beingmate Baby & Child Food Co., Ltd to form a Joint Venture for marketing and distribution of Bubs® full portfolio of infant formula and organic baby food products in China.

Bellamy's Australia Limited (ASX: BAL) makes certified organic, nutritious food and formula using the very freshest, high quality and certified organic ingredients. The company has set a new platform for sustained revenue growth and a higher level of investment in China. It has planned to double its marketing spend and the size of the China team in 2H19. The company delivered a group revenue of $130M and EBITDA of $26M on a normalised basis in 1H19. 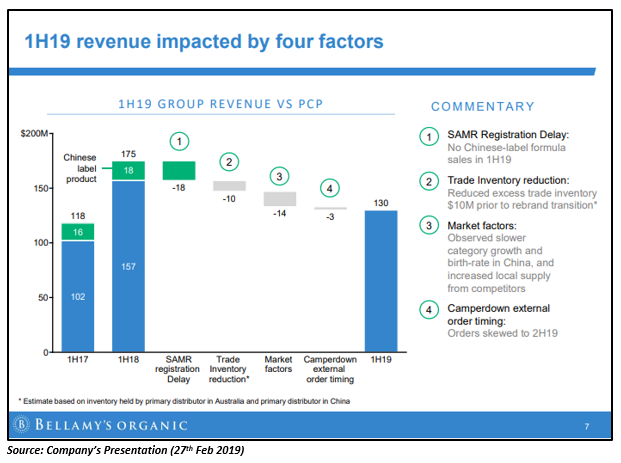 Headquartered in Australia, Wattle Health Australia Limited (ASX: WHA) is well known for its sustainable, organic and superior-quality products that boost health and wellness at every stage of life. For the supply of the Company’s conventional infant formula range into China, the company signed a binding supply agreement with International Supplies and Distribution Co. in the first quarter of 2019. The company has predicted its dairy sales to grow by $1.8 billion (USD) by 2021 in China, driven by infant formula.

The stock of the company closed in red on 4 June 2019 at AUD 0.550, with a fall of 8.33 per cent relative to its previous closing price of AUD 0.600. Around 1,073,815 number of company’s shares were in trade today with its market capitalisation recorded at AUD 116.7 million. The stock has not performed well this year, generating a negative YTD return of 34.07 per cent.

As China is a one-party state, there is a higher risk for these companies that changing rules will favour Chinese companies over them.