As per today's trading session on ASX, AOG, PNI and ECX have shown upside movement of 2.828%, 1.182% and 7.083%, respectively. Let's dig deeper and look at these stocks with their recent updates.

Aveo Group (ASX: AOG) is engaged in the management and development of retirement villages. It is an Australia registered company listed on ASX in 1993. On 4th July 2019, Aveo Group updated the market about its strategic review process. Accordingly, the company confirms Brookfield Property Group and affiliates as the preferred party in its strategic review process. In addition, the company continues to negotiate with the preferred party related to its indicative proposal.

In another update, the company released its Trading, Annual Distribution and Strategic Review update. AOG affirmed that its distribution was targeted based on the payout range of 40% to 60% of underlying profit.

In terms of the development results, the company reported a gross profit of $13.4 million in 1H FY19, a decrease of 39% when compared to the pcp. The gross profit skewed towards the second half for both the major and minor developments. Moreover, the holding costs comprised of vacant unit levies have increased driven by the longer settlement time. The company further stated that it has allocated additional overheads in order to develop the launch of Freedom conversion program. The underlying profit after tax in 1H FY19 stood at $12.0 million, reflecting a decline of 67% on pcp on the back of a number of unit settlements. 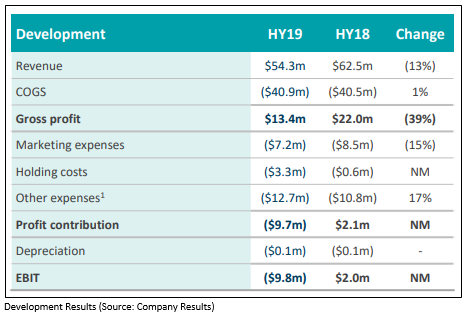 Recently, the company released an Investor Presentation at Wilsons Rapid Insights Conference, wherein Pinnacle outlined its operational and financial performance for 1H FY19. Accordingly, the company reported FUM of $46.7 billion at the end of half year period, which is substantially higher than $38.0 billion recorded at the end of previous half. Its diluted earnings per share from continuing operations for the half year period was 5.7 cents, which is 14% higher as compared to previous corresponding period.

The company completed the acquisition of a 35% interest in a new listed investment trust, Metrics Credit Partners for the amount of $46 million in July 2018. After the acquisition, Metrics had cash of around $40 million to deploy in support of its medium term growth initiatives. The company’s total affiliates revenues amounted to $103.1 million, which included $0.6 million in performance fees in 1H FY19 against $70.5 million total affiliates revenues in 1H FY18. Pinnacle is focused on managing the business in order to increase profits and its value over the medium term. 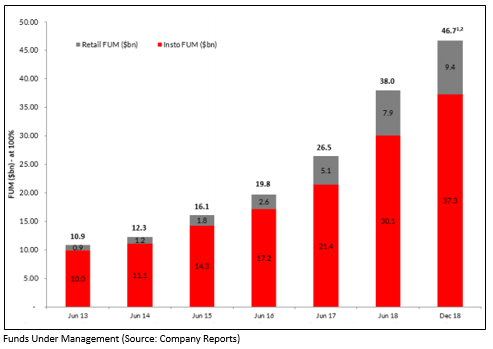 Eclipx Group Limited (ASX: ECX) is involved in the financing of vehicles and equipment and transacts in administrative and management businesses. Lately, the group released its Results Presentation for 1H FY19. In terms of funding, the company has a well diversified funding model of the warehouse, P&A funding arrangement and ABS insurance, positioning it well for the continued growth. The company’s available funding resources for growth includes $94 million of unrestricted cash, $165 million of undrawn committed warehouse facilities and third-party funding agreements with more than 20 financiers. The company has further pointed out a strong interest of the external investor in ECX’s debt funding platform, with investors investing in senior and mezzanine notes. The company will continue to target ABS issuance when optimal pricing and favorable market conditions are available. In addition, the company reported $32 million in free cash for 1H FY19. 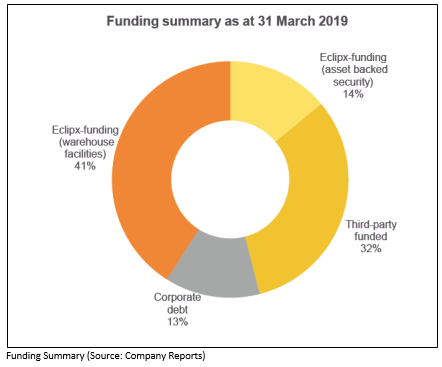 Eclipx Group witnessed a decline in net assets to $712 million at the end of 31st March 2019, as a consequence of goodwill impairment of $118 million, adjustment related to the adoption of AASB 9 and 15 and prior period restatements related to revenue recognition in Right2Drive, a vehicle rental business. ECX posted $85.0 million of net operating income in 1H FY19 as compared to $88.2 million in 1H FY18. The company reported EBITDA for the period of $40.7 million as compared to $41.8 million in 1H FY18. The group’s current debt facility includes a weighted average maturity of 3.3 years along with maturity date of 30th September 2021. Eclipx has active engagement and longstanding relationships with six corporate debt financiers.

Previously, in another update, the company announced a merger with McMillan Shakespeare.