Australia is one of the most popular tourist destinations in the world; ergo Australia’s travel industry is very critical for its economy. Let’s take a quick look at 3 Popular Travel Stocks currently trading on ASX.

The transaction was completed on 30th June 2019 and was funded through FLT’s existing debt facilities.

The acquisition is underlining the FLT’s position as one of the world’s largest corporate travel management businesses and is providing FLT with a stronger corporate network and a compelling proposition for French and Swiss customers.

FLT’s corporate businesses have been performing strongly, generating $4.2 billion in TTV (Total Transaction Value) during the six months to December 31, 2018, which is about 37% of the group’s global TTV for the period.

In April 2019, the company also acquired a 25% interest in a Washington DC-based, technology-driven business, The Upside Travel Company, which is considered to be a smart strategic move to become Upside’s largest individual shareholder.

Encouraging news for the company and its shareholders being, through this acquisition, the company has gained access to a travel technology platform and software development resources, which in turn, is going to improve the company’s SME offering. It is expected that the Upside offering will underpin the company’s Corporate Traveller Brand. Further, the company believes that it has the potential and the capability to disrupt the traditional market players in the SME market.

The company has also invested in 30SecondsToFly, a Bangkok-based firm in the past, strengthened its global footprint and its US West Coast presence by acquiring Casto Travel, a Silicon Valley-based organisation and acquired the award-winning mobile app Sam :]. 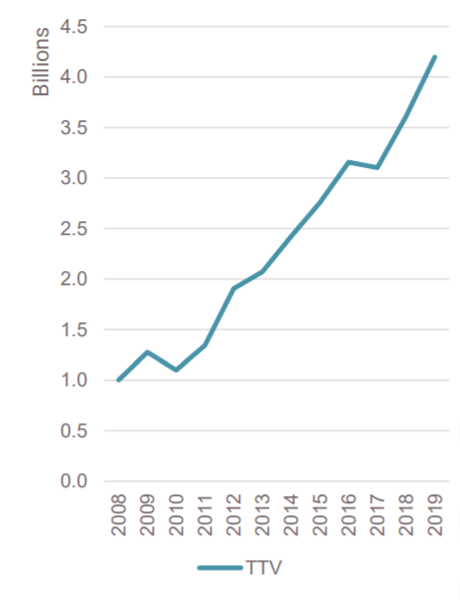 The company is currently in the second year of a five-year business transformation program and is working towards achieving three specific targets through to the end of FY22:

The company has informed that it will implement additional strategies during 2H to address these issues and complement the longer term initiatives. The company’s international businesses have kicked off FY19 second half with a strong impetus. The company is expecting to make further progress towards its FY22 business transformation goals related to TTV growth, cost margin and net margin as the year progresses.

A cost-effective travel solutions provider, Corporate Travel Management Limited (ASX: CTD) recently announced the appointment of a former long-term Tatts executive and Chief Financial Officer, Neale O’Connell, to the role of Global CFO, effective 9th July 2019. Mr O’Connell has spent 14 years at Tatts Group and his public markets experience includes managing the major financial elements for the floats of Smorgon Steel. With his appointment, the company has made a significant addition to the company’s Board as he brings highly relevant experience to CTD.

Since its Initial Public Offering (IPO), the company’s total transaction value has grown over 18-fold in nine years.

In the first half of FY19, the company’s reported TTV of $2,951.5 million was 31% higher than the previous corresponding period (pcp). Further, the company reported revenues and other income of $212.2 million, up 23% on pcp.

During the period, the company continued to increase the market share, with organic growth being a primary driver, contributing $9.4 million to profit growth. The company won significant global clients during the half year, primarily due to the company’s global network and its innovative SMART technology suite. 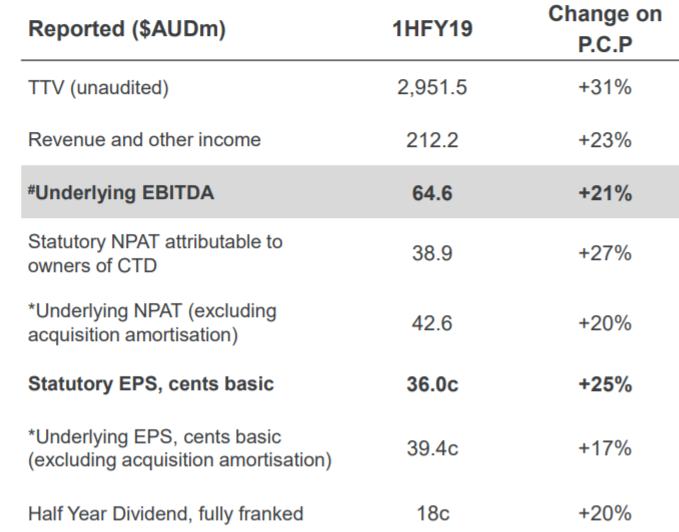 The company is focused on executing its strategy to establish a global footprint and generate scale and create opportunities for long term sustainable growth. The company is confident that it will continue to walk on the path of growth and development for many years to come.

In North America division, the company’s revenue grew by 18% to $70.2 million and its EBITDA rose by 3% to $17.9 million. The company expects the technology competitive advantage to support new growth opportunities in national and SME client segment. The company expects that its North America division will experience double-digit EBITDA growth in the second half. In Asia, the company’s revenue increased by 47% to $38.3 million while its adjusted EBITDA grew 34% to $12.5 million. The company projects Asia to be a strong contributor to the incremental profit growth in the second half of FY19 and throughout FY2020.

The company’s operations in Europe contributed $43.3 million in revenues for the half year ended December 2018 as compared to $35.9 million in pcp. The adjusted EBITDA for the Europe business increased by 30% to $16.8 million and the adjusted EBITDA margin increased from 35.9% to 38.8%. As per the company’s FY19 guidance, the company is tracking at the top end of its FY19 guidance and expects its FY19 underlying EBITDA to be in the ambit of $144 million to $150 million.

A digital travel business, Webjet Limited (ASX: WEB) recently released a presentation with an emphasis on introducing Rezchain and Rezpayments.

Rezchain is a critical component in moving from an “8/5/3” structure to an “8/4/4” in the company’s WebBeds business by FY22. Rezchain is basically a B2B division of Webjet Limited.

Rezpayments reduces compliance costs and improves control, allowing the company to easily implement solutions in a hierarchy that captures the customers’ credit card data, directs it to Rezpayments, where it is exchanged for a token and that token is then stored in the users’ systems.

In the first half of FY19, the company delivered a record performance with a 42% increase in EBITDA, reaching to $58.0 million while the revenues increased by 33% to $175.3 million. Further, the company’s net profit after tax (NPAT) increased 61% to $38.3 million as compared to pcp.

In the half year period, WebBeds consolidated its position as the #2 global B2B player. 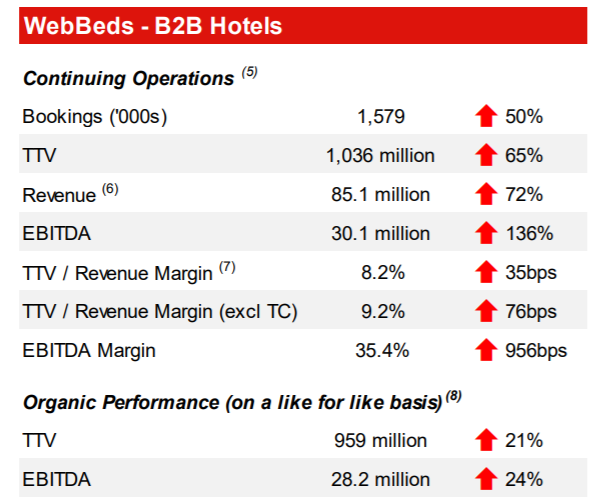 During the period, the company determined a fully franked interim dividend of 8.5 cents per share.

The acquisition of JacTravel in August 2017 cemented WebBeds as the #2 global B2B player. The integration has gone well and JacTravel has been instrumental in strengthening the company’s competitive market position, increasing its size in all regions and significantly expanding its pool of directly contracted hotel inventory. Direct contracts are a vital component of the company’s multi-supply aggregation strategy, helping feed its global distribution network and reducing reliance on third-party suppliers. During 2018, the company increased its direct contracts in key markets (particularly Asia and the Americas).

At 2018 AGM, the Chairman informed that Webjet aims to keep a relatively conservative balance sheet so that the company will be relatively insulated against unforeseen conditions and have the capacity to pursue new opportunities as they come along.