Emeco Holdings Limited (ASX: EHL) operates in the earthmoving industry and deals in safe and reliable earthmoving equipment solutions. On 12th June 2019, the company released a presentation on its Operational Updates for FY19. It expects the operating EBITDA to be between $211 million and $213 million, an increase of almost 40% on FY18 figures. Net sustaining CapEx during FY19 is forecasted to be in line with the depreciation of $85 million. Also, growth CapEx from the purchase of high-utilisation assets will be below the budgeted expenditure of $90 million and is expected to generate $25 million EBITDA in FY20. The leverage by the end of FY19 is expected to be 2.1x, with an FY21 target of 1.0x. Additionally, the company will see a strong cash flow position in FY20.

The Eastern Rental Region was characterised by strong customer demand, particularly in East Coast coking coal. Growth assets are being placed in the region to meet that robust demand. In the Western Rental Region, the bidding activity has substantially increased, bringing in new contracts.

During 1H FY19, the company reported strong financial growth with operating revenue increasing by 31% to $224.3 million, operating EBITDA increasing by 53% to $102.8 million and operating NPAT by 160% to $31.7 million. Growth in earnings was backed by the acquisition of Matilda and Force, ramp up of Force workshops and increased average operating utilisation of 64% from 57% in pcp. This was also accompanied by a strong cash flow position.

Emeco aims at creating value by working towards being the highest quality and lowest cost provider of earthmoving equipment services. Through its partnership with Quartile One, it has access to advanced analytics, which helps the company deliver optimised asset decisions. It is committed to a strong balance sheet and expects to maintain strict capital management discipline to ensure strong returns. 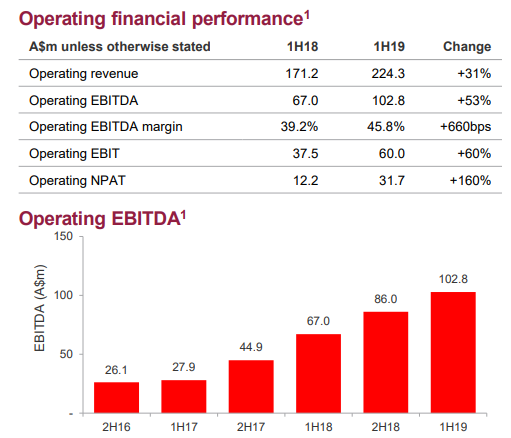 During H1 ‘19, the business performed well in Australia with new wins and contract extensions along with continued growth in the aftermarket products and consulting activity. Conditions were similar during 3Q FY19 with strong customer retention, continued growth in the aftermarket products and new business wins. The UK market in 1H FY19 recorded good growth in personal contract hire and short-term rental. The market in New Zealand also saw new wins and contract extensions. The current period experienced the van market growth in the UK along with personal contract hire and large tool-of-trade tender wins. The market in New Zealand has seen the introduction of Inspect365 solution, new sizable wins along with other ongoing tenders. As a part of its strategic initiative, the company has structured a new syndicate corporate debt facility, which will be used for potential securitisation funding.

During the first half of FY19, the company reported a decline in revenue majorly as a result of lower new vehicle deliveries. Total revenue was reported at $248.7 million, down 1.9% on pcp. Net profit after tax was recorded at $29.4 million, down 6.7% on pcp. Earnings per share also went down by 8% in comparison to 1H 18 to 11.33 cps. During the period, the company also declared a fully franked interim dividend of 8.169 cps. Despite the abovementioned decline in the revenue and profits, a strong performance was noted in tool-of-trade business and offshore operations along with a decent performance in all the markets, including Australia, New Zealand and the UK. 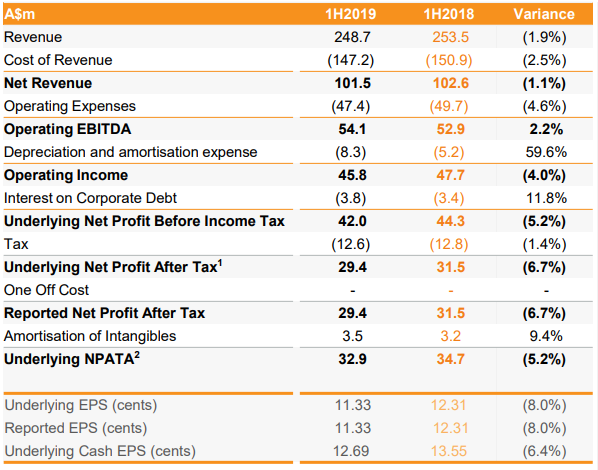 Performance in the second half of the year is likely to be impacted by tough challenges in the consumer business. The company is working towards coping up with the headwinds in the segment but does not promise a standout performance during 2H FY19.

AMA Group Limited (ASX: AMA) is engaged in the business of automotive aftercare and accessories.

In an announcement to the exchange on 12th June 2019, the company updated that it has received the market investment incentive instalment of $30.9 million, which was utilised to finalise contractual earnouts, acquisitions and other general purposes. The company is set to finalise a set of binding agreements and Greenfields for panel and other businesses by June 2019. The acquisitions are expected to contribute revenue in excess of $120 million and EBITDA close to $12 million on an annual basis. The company planned to fund the acquisitions through a combination of cash and debt and has also raised its debt facility with NAB to C$150 million.

Another update was in connection to the appointment of Steven Bubulj to the position of CEO of Panel Division to help drive the growth of the division. He holds extensive experience in the industry and is expected to join the group from 1st July 2019. The company is progressing towards its procurement opportunity with key supply and distribution agreements being finalised. While earnings from the opportunity will be minimal during FY19, it is expected to provide positive returns in the subsequent financial year.

During 1H FY19, the investments made by the company led to a significant improvement in the business. For instance, the Vehicle Panel Repair division acquired four new businesses and opened two Greenfields. The company reported an EBITDA of $24.3 million, up 17.77% as compared to pcp EBITDA of $20.6 million. Revenue during the period amounted to $302.5 million, up 32.45% on pcp. Net profit for the period amounted to $9.9 million, reporting an increase of 29.82% on the prior corresponding period. The strong performance in the current period augurs a boost in future earnings. 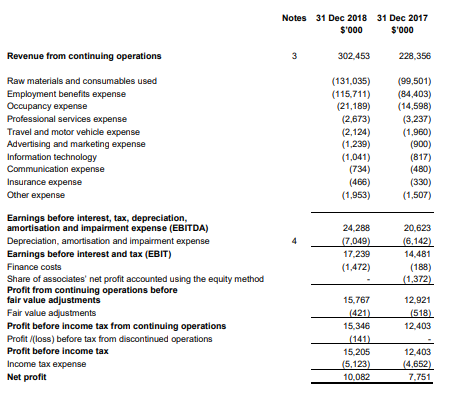