Marenica Energy shares came into a bull run just after the company lifted a week-long suspension from its securities. The stock rose over 27.77% on the news of 80% increase in Marenica’s Uranium Resource base that will make the company sit on the 4th position among all Uranium focussed companies on the ASX. At the time of writing, 4 July 2019 (12:29 PM AEST), MEY shares are being traded at $0.110.

Latest Update: This morning, Marenica announced the counter-cyclical purchase of high-grade uranium resources from Optimal Mining Limited at an acquisition price of A$250,000 cash and 27.5 million shares in Marenica. It counts to acquisition of 48 million lbs of High-Grade Resources at an average of 859ppm U3O8 that will increase the Marenica’s Uranium Resource base by 80% to 110 Mlbs. 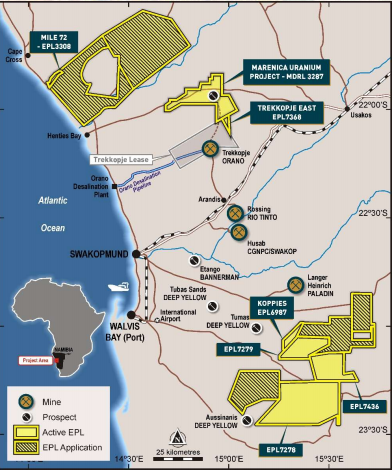 The report read that the Mineral Resources are significant in their own right, but when coupled with the potential of Marenica’s U-pgrade™ beneficiation process, Marenica can foresee how further value could be unlocked from these assets.

Marenica Managing Director, Murray Hill stated: “Following completion of the acquisition Marenica will have high-grade uranium resources in Australia; uranium resources and a recently assembled highly prospective exploration tenement position in Namibia; all of which Marenica expects to add significant value through application of its U-pgrade™ beneficiation process.”

Marenica is now positioned as one of the largest uranium resource inventories on the ASX, diversified by location, with a revolutionary uranium beneficiation process. However, the completion of acquisition remains subject to a satisfaction of number of conditions.

Murray Hill added: “the acquisition is timely given the pending decision on the uranium Section 232 Petition in the US and the improving fundamentals for the uranium market. Marenica continues it’s exciting phase of development in the uranium space.”

Company Overview: Marenica Energy is an ASX-listed uranium exploration company that holds two core uranium projects, the Marenica Uranium Project and Mile 72 Uranium Project, both located in Namibia. The company also owns its patented beneficiation process called U-pgrade™. The process is based on the company’s belief that the processing of surficial uranium could be revolutionised by reducing processing capital and operating costs by approximately 50% and placing lower-grade projects at a competitive edge. It is therefore positioned as a cost-saving process which has the potential to produce low-volume high-grade concentrate which reduces handling, processing and tailings costs.

Demand for uranium is getting fuelled with China and rest of the world building nuclear reactors but big producers have cut back ~20% of supply to instigate price correction to see a significant price rise in U3O8.

In an announcement dated 4 July 2019, Bryah Resources announced that its initial phase of exploration drilling within the Bryah Basin in central Western Australia has identified significant manganese mineralisation at the recently discovered Brumby Creek Prospect.

Bryah identified the Brumby Creek Prospect during ground reconnaissance and rock chip sampling in 2018 and drilled a total of 35 holes for 1,092 metres in the first phase. Drilling targeted areas of outcropping manganese with the focus being on the eastern side of an interpreted syncline. Best intervals at Brumby Creek (using a 18% Mn cut-off grade) include: 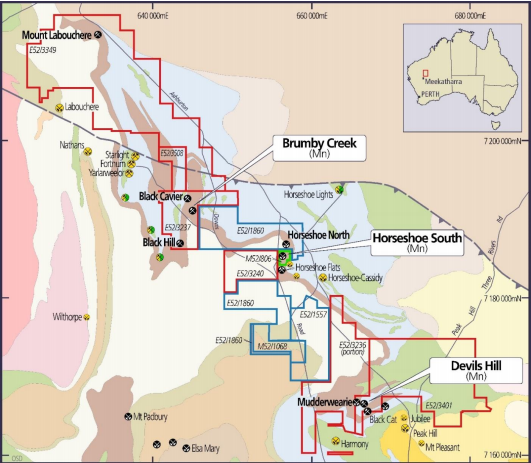 Managing Director Neil Marston stated that these results from initial round of drilling are extremely encouraging, which validates the company’s manganese strategy. He added This drilling demonstrates the potential to discover new manganese deposits under shallow cover within the company’s project area.

At Horseshoe South, Bryah Resources conducted a drilling of 32 holes for 1,124 metres in the first round. Horseshoe is positioned as the largest manganese mine in the region with the rich history of having produced ~1 Mt of high-grade manganese ore till 2011. The latest drilling targets at Horseshoe reportedly included the extensions of manganese drilling completed in 2011 on the neighbouring tenement to the south of M52/806 which recorded an Indicated Mineral Resource of 437,000 tonnes @ 19.6% Mn.

The Devils Hill Prospect, identified in 2018, was drilled for a total of 48 holes for 720 metres. And at the nearby Black Cat Prospect, 7 holes for 126 metres were drilled with no significant results recorded.

Manganese Market Overview: Manganese is an irreplaceable and critical component in steel production and is mainly used to increase both the strength and flexibility of steel. Approximately 90% of all manganese is used in the production of steel. 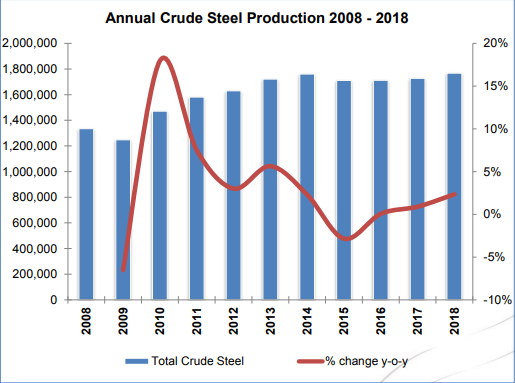 Bryah Resources’ Forward Plan: For 2019, the company sets its priority for drilling to test target areas and completing the Mineral Resource Estimates. The metallurgical testwork, evaluation of mining options and securing mining leases and approvals to mine are some other important activities in the to-do list of the company.