A communications sector company, Spirit Telecom Limited (ASX: ST1) is a provider of superfast Internet and ancillary services to a range of commercial and residential buildings, which are majorly located in suburbs of Australia. Spirit Telecom was officially listed on ASX in 1999. On 26th June 2019, the company via a release updated the market that it has secured new and increased debt facility of $8 million with the Commonwealth Bank of Australia. The increased facility presents the company with additional financing and agility in order to execute on its existing acquisition pipeline more rapidly. The management elaborated that this new increased funding facility along with underwriting of $5.6 million options via Shaw & Partners will give the company a needed flexibility to advance its acquisition and organic growth targets and a near term funding of a net increase of nearly $10 million. The material terms of the debt facility include a drawdown of up to $8 million revolving facility, margin above BBSY of 3.85% on drawn amounts and $900,000 annual amortisation paid quarterly starting in September 2019.

Initial Director’s Interest and Change in Substantial Holding: Mark Dioguardi and Sol Lukatsky, appointed on 21st June 2019, have become initial Directors in Spirit Telecom Limited with number and classes of securities totaling 833,333 and 2,083,333, respectively. Moreover, Crazy Diamond Pty Ltd and Peter + Diana Diamond ATF have changed their holdings with a minor change in voting power of 19.99% (Present votes of 61,140,000 compared to the previous votes of 60,800,000) on 21st June 2019.

In another announcement, the company reported that it had inked a million-dollar deal with Victorian State Government.

First Half 2019 Business Update: In 1H FY19, the company saw significant business demand for on-net high speed business grade products in under-served NBN geographies. The company experienced a small uplift in revenues to $8.2 million, due to a delay in the deployment of Melbourne high speed network, which is now completed and an ongoing decline in non-core/Legacy revenues. The company’s gross profit was up 9.6% Y-o-Y, with an underlying EBITDA of $0.362 million, driven by investments in marketing, salaries and network coverage expansion. The company was awarded a tender of $1.7 million to build a superfast network in Horsham and is shortlisted for two additional regional high speed network tenders. Additionally, the company witnessed a positive movement in total contract with 22% growth, excluding Horsham against 1H FY18. The company is optimistic that more network will deliver more opportunities as it moves ahead. 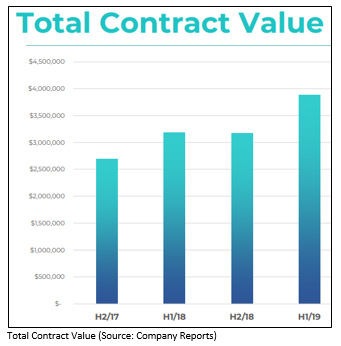 Importantly, the company’s normalised net operating cash flow for the period amounted to $742k, with $3 million cash in bank at the end of the period. Its operating expenses increased during the period on the back of growth initiatives, with marketing/lead generation costs of +$294k and network expansion of +$492k.

Outlook: In terms of high-speed B2B services, there is robust demand throughout SME/Corporate business segments. The company expects that its EBITDA will revert to the previous levels in H2 FY19, along with a reduction of $5.2 million in operating expenditure. Furthermore, it is focused on acquisition targets with complementary wireless network assets and currently, has a short pipeline list of two to three targets moving through due diligence gates.

A communications services sector company, GTN Limited (ASX: GTN) is a provider of different advertising platforms, which allows advertisers to reach television and radio audiences. GTN Limited was officially listed on ASX in 2016. On 26th June 2019, the company provided an Earnings and Trading Update for FY19. Accordingly, the has company implemented several organisational and strategic changes in order to improve its performance in Australia.

The company lately hired key personnel exclusively focused on television and advertising accounts not yet engaged ATN, a largest broadcast media advertising media platform. The company added more sales representatives in its sales force and promoted Marketing Strategy Director, Kelly McIlwraith to Commercial Sales and M&S Director. Looking at the Canadian business of the company. It has witnessed a material increase in revenues during the second half of FY19, driven by the impact of the Rogers Toronto affiliation agreement. Additionally, Lannie Sibian, President of CTN, an advertising media platform in Canada, will be departing from the company effective 30 June 2019. Bill Pezzimenti, Sales Consultant GTN, will oversee the proceedings until the successor will fill-in Lannie’s shoes.

Change of Interest of Substantial Holder: Viburnum Funds Pty Ltd, which is a substantial holder of GTN Limited, increased its voting power from 17.81% to 19.01%.

Macquarie Australia Conference Presentation Takeaways: The company’s unique business model seeks to provide value for the advertisers and broadcasters. In 1H FY19, the company witnessed a rise of 2.3% in revenues driven by organic growth in all non-Australian markets in both local currency and AUD and overall revenue growth, partially offset by a decline of 3% in the Australian market. Furthermore, EBITDA and adjusted EBITDA experienced a decline, primarily on the back of station compensation. NPAT and NPATA were also impacted by additional depreciation expense from the adoption of AASB 16 – Leases.

Growth Strategy: The company’s management is focused on accelerating its revenue growth in all markets. In terms of the Australia segment, the company is committed to managing its sales staff and processes to ensure that ATN maximises revenues in a difficult market and is well placed and ready to take advantage when the market conditions improve. With respect to Brazil, the local management is continuously focused on investing in BTN’s affiliate network in its existing markets to strengthen the product offering and drive continued growth in revenue and EBITDA. The company will continue to explore opportunities in order to open additional markets and expects to start operations in the new markets in the future. For the United Kingdom, the company will attempt to maintain profits from the mature market by increasing the revenues where possible.

Outlook: The company expects its adjusted EBITDA to be in the range of $37 million to $38 million for the year ended 30th June 2019 against $48.1 million in the prior corresponding period, majorly on the back of a combination of a forecasted 7% decline in the Australian revenue along with a rise in expenses in Australia, which is the company’s leading operating segment. It expects that the revenue will be stable at $185 million as the GTN continues to perform well in other markets.

The revenue for the Brazilian market is expected to grow by around 10% in local currency in FY19, notwithstanding the substantial economic turmoil in the country. The company is well placed for the future to continue to grow revenue and become a true national network. There is an anticipation of an increase in revenues and EBITDA in the UK in FY19 in the face of uncertainty surrounding Brexit. The UK business continues to generate meaningful cash flow for the company despite no upside in some of its less mature markets.

As of 31st May 2019, the company’s cash balance stood at $49.4 million and it will continue to generate positive cash flow and maintain a strong balance sheet. The Board reconfirms the current dividend policy of an annual dividend in the range of 70% to 90% net profit after tax, with the total dividend weighted toward the final dividend and paying approximately 50% of half-year NPAT as an interim dividend to maximize the available franking credits.