The financial services sector in the Australian region makes the largest contribution to the economy. The sector contributed nearly A$140 billion to GDP in 2018 and employs 450,000 people. Westpac Banking Corporation (ASX: WBC), Commonwealth Bank of Australia (ASX: CBA), Australia and New Zealand Banking Group (ASX: ANZ) and National Australia Bank (ASX: NAB) are the four largest retail banks in the country. These are also the largest banks in the world, in terms of market capitalisation. At the same time, the country’s pool of investment fund assets is the largest in Asia and the fourth largest, globally.

Australia’s financial services sector was named as one of the best across the world, highlighted in the 2012 rating provided to Australia from the World Economic Forum Financial Development Index. The rating was partly driven by financial stability and strength in financial intermediation.

The changing customer preferences, growing mobile device user base and technological developments are expected to have a huge impact on the financial services sector in the coming years. FinTech or Financial Technology is changing the way financial services are being provided in areas like insurance, investment management, payments, capital markets and primary banking accounts. Also, digital currencies including Bitcoin, mobile payments, peer?to?peer lenders and such new approaches would drive the future of financial services in Australia.

Let’s have a look at recent updates from one of the largest banks in the country - Commonwealth Bank of Australia and annuities provider - Challenger Limited.

Commonwealth Bank of Australia (ASX: CBA) is a major banking and financial services provider, based in Sydney, Australia. With branches spread across Asia, North America, Europe and New Zealand, the bank serve its customers with retail banking, business and private banking, superannuation, wealth management, general insurance, institutional and other services. Founded in 1911, CBA also offers investment and share-broking products and services. The bank, at present, employs a staff of 48,900 people, has a customer base of 15.9 million and over 800,000 shareholders.

As per the CBA’s announcement, on 13 June 2019, Commonwealth Bank of Australia inked a deal worth A$2.5 million with CountPlus Limited (ASX: CUP) to sell Count Financial Limited (Count Financial). The deal covers A$200 million in indemnity from CBA to CountPlus. The indemnity, for which all the claims need to be conveyed within a four-year period of completion to CBA, is related to a potential contingent liability of A$56 million, over the A$144 million paid in earlier customer remediation provisions relating to Count Financial. As per the deal, Commonwealth Bank of Australia will manage customer remediation related to past issues at Count Financial. The deal is subject to the vote of CountPlus shareholders, which would be conducted in August 2019. Also, the deal is anticipated to be concluded by October this year.

The deal is unlikely to result in a material impact on CBA’s NPAT. Also, CBA holds a 35.9% stake in CountPlus, and plans to divest its stake in CountPlus after the above-mentioned deal concludes, though this plan depends on market conditions and would be carried out in an orderly manner over time. CountPlus was projected to incur a $13 million post-tax loss in FY19. The bank is also considering selling its units, namely Colonial First State, Financial Wisdom and Aussie Home Loans. The divestment plan is in line with the bank’s announcement in March 2019 of exiting these businesses over time.

Recently, the company had published its March Quarter Presentation.

Challenger Limited (ASX: CGF) is the largest annuity provider in Australia, offering a wide range of products such as lifetime annuities, superannuation products, aged care solutions, term annuities and fixed income managed funds. The firm offers guaranteed income payments to nearly 60,000 retirees by managing assets worth A$18 billion (as on 31st December 2018). Regulated by the Australian Prudential Regulation Authority (APRA), Challenger Life, a Life Company, gives a guarantee to the annuities offered by the CGF. The company operates from Sydney, Australia.

On 13th June 2019, the company made an announcement on ASX, covering an update regarding its recent performance and its outlook for FY20. As per the company’s financial outlook, the company expects its normalised net profit before tax for FY20 to be in the range of $500 million to $550 million, compared to $545-$565 million forecasted for FY19 period. The normalised Net profit before tax guidance range for FY20 includes lower equities growth, lower interest rates on shareholder capital and DPM initiatives. Also, the normalised dividend payout ratio has been mentioned, to be more than 50 percent of normalised Earnings per share for the FY20 period. 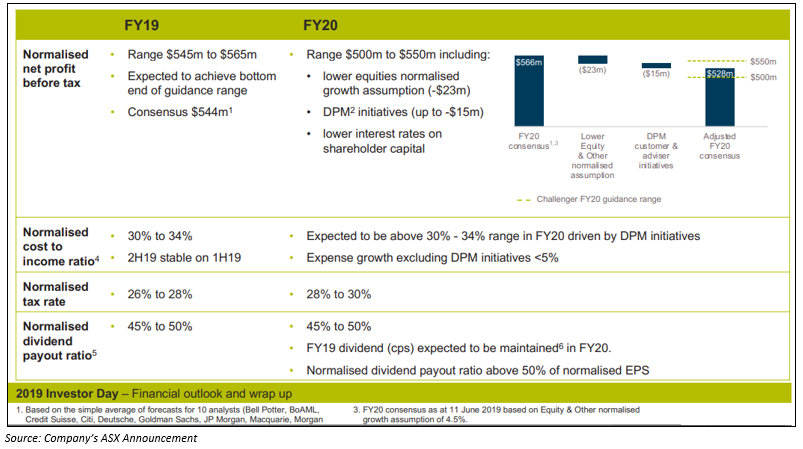 Meanwhile, the company unveiled that its Q319 sales have been impacted by lower adviser productivity, while the impact of advice market disruption is expected to grow in the fourth quarter. As a result, in response to market disruption and drive growth, the firm’s plan is to focus on strategic initiatives, including boosting distribution channels that would cover access to more IFAs, maintaining thought leadership and collaborating with profit-for-member funds. The firm also plans to have targeted initiatives in place, in order to address advice disruption and make new investments to achieve growth. 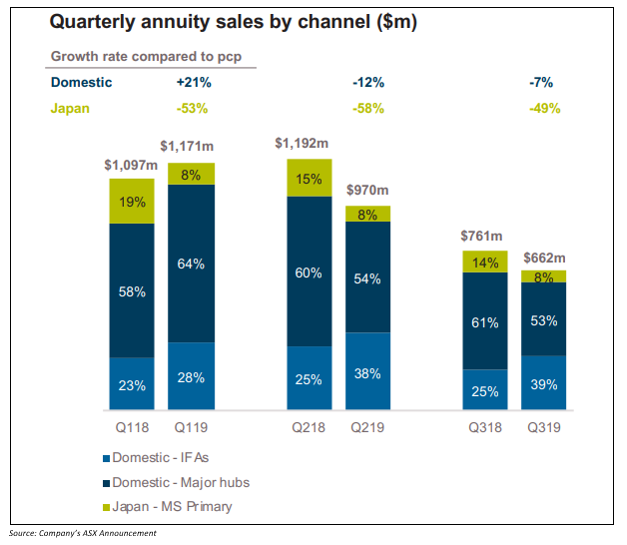 Update on Strategic Relationship with MS&AD

As part of its strategy to further grow in its international operations, the firm is diversifying by boosting its access to the Japanese market by expanding its strategic relationship with Japan-based MS&AD Insurance Group Holdings Inc, a leading insurance company. MS&AD intends to take a larger stake in Challenger by increasing it to above 15%. Moreover, the Japanese firm is set to gain a seat in the Challenger’s board. The expansion of this strategic relationship would result in lucrative growth opportunities for both entities.