Financial and Operational Performance in FY19: Total revenue of the company saw an increase of 16.9% to $901.2 million, largely driven by like-for-like sales growth and new restaurant openings. The higher top line was accompanied by strong business controls resulting in further improvement in EBITDA to $112.2 million, up 25.2% (YoY) and net operating cash flow to $97.5 million, up 30.9% (YoY). The bottom line was impacted by significant items of $5.9 million in the period.

KFC Australia business performed well, with CKF now operating with a national footprint. Top line posted a Y-o-Y growth of 15.8% to $722.6 million, largely on the back of increased restaurant numbers, along with same-store sales growth. Underlying EBITDA for KFC Australia recorded a growth of 20.9%, to $120.0 million. The underlying EBITDA margin for the period came in at 16.6%. CKF spent $23.0 million on new restaurants and remodelling and maintenance program to boost the growth.

KFC Europe posted a top line of $123.8 million and underlying EBITDA of $6.8 million. The period saw 37 restaurants in operation, of which 20 restaurants were in the Netherlands and 17 in Germany. Costs associated with new restaurant openings, weak trading and increased support costs impacted the EBITDA. CKF spent $13.6 million on new restaurants, remodels and maintenance during the year.

Sizzler witnessed a de-growth of 8.0% in revenues to $46.7 million due to the closure of two restaurants in Australia. Same-store sales in Australia showed a growth of 4.4% against 0.5% growth in FY18. Underlying EBITDA at $4.9 million was slightly higher as compared to the pcp. CKF ended the period with 12 Sizzler restaurants in operation.

Sizzler franchise in Asia posted a growth of 12.2% in the top line on pcp. During the period, three restaurants were opened in Thailand and two in Japan, whereas one restaurant was closed in China, with the total restaurant count in Asia to 77.

The company in the first half of FY19 posted revenue growth of 27.6%, with underlying NPAT growth at 25.9%.

The company recently advised that it has now been served with an unsealed class action proceeding filed Phi Finney McDonald on behalf of Australian Franchisee Employees in the Federal Court of Australia. DMP was alleged to mislead its franchisees and in-store workers.

The company also updated investors about on the media articles related to the potential legal action from the current/former team members for their pay rights.

DMP, in the recent past, communicated that Commonwealth Bank of Australia and its related bodies corporate became the initial substantial holder with voting rights of 5.00%.

1H FY19 Performance: Global food sales posted a growth of 14.6% to $1.43 billion for the period, driving a 12.1% lift in EBIT to $108.3 million. Overseas markets of the company contributed more than half of the EBITDA with $71 million EBITDA contribution from Europe and Japan. Online sales saw a growth of 16.5%, $132.2 million higher than pcp, on track with the company’s vision of Leading the Internet of Food in Every Neighbourhood. The online platforms of the company processed 32.4 million orders during the period, which implied more than two orders each second. Global network sales growth came in at 3.3%, reflecting strong performance by Germany, New Zealand, Benelux, fast food, whereas Australia witnessed a soft performance and France performed below expectations.

Underlying operating cash demonstrated growth of 26.2%, posting a decent rate of cash conversion. DMP reached important milestones in terms of Domino’s stores and surpassed 1,000 stores in Europe, of which, 700 stores were established in Australia and 300 stores in Germany. Domino’s ANZ inched up its market share in the fast food and pizza segments with NZ business performing well. Japan witnessed a standout performance with EBITDA growth of 34.3% on pcp. Benelux operations are growing stronger, with the conversion of Hallo Pizza shops in Germany exceeding the expectations. 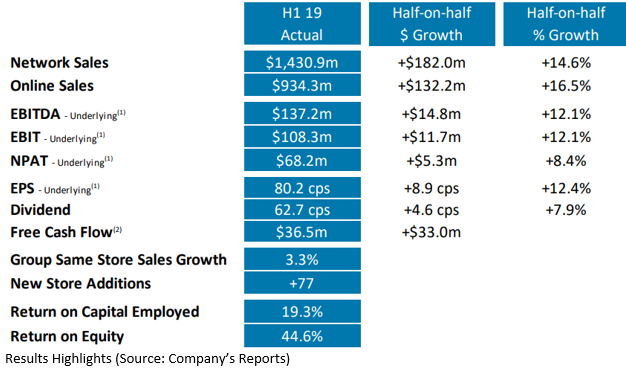 Going forward, the management expects same-store sales for FY19 to be at the mid to lower end of 3% to 6% range. Earnings before interest and taxes are likely to be at the lower end of the guided range of $227 million to $247 million. Net capital expenditure to be between $60 million to 70 million.