The below-mentioned stocks belong to the Airline Industry. These stock have made strong strategic progress in the recent past. Let’s look at the recent updates of these companies.

In May, the Airport witnessed strong growth (+6.3%) in its international passengers, mainly due to the increased demand. During the month, the airport experienced double-digit growth from USA, Malaysia, Greater China as well as from Japan.

Following the release of the May Traffic Performance, the Sydney Airport’s stock witnessed an uplift of 4.419% during the intraday trade.

The Airport has recently provided an update on SAT1 indemnity in relation to the historical investments, wherein the company has informed that the recent decisions of the Court of Justice of the European Union have prompted reconsideration of the status of indemnities provided by Sydney Airport Trust 1.

The company has also advised that ECJ decisions were not in relation to the two tax disputes covered by the SAT1 indemnities and SAT1 has assessed that some or all of the $119.1 million non-current receivable may need to be expensed and a future call on its indemnities is possible, up to a maximum of $61 million as at 30th June 2019.

For the past 100 years, Sydney Airport has been a key driver of tourism in the state of New South Wales. Sydney Airport is a high-quality asset on a very long-term lease (out to 2097). The airport community employs over 31,000 people, many of whom reside in the local communities, and supports 800 small, medium and large businesses.

In the last five years, the Airport’s strong passenger growth on the aeronautical side and increasingly diverse non-aeronautical business, coupled with a strong strategy have delivered five-year compound revenue growth of 7.3% and EBITDA of 7.1% per annum, respectively. Furthermore, the execution of the company’s strategy has translated directly into stable distributions with a solid growth profile.

At the recently held AGM, the management informed that over the past five years, Sydney Airport has delivered a total shareholder return of 17.7% per annum, including the reinvestment of distributions. This compares to the ASX100 performance of 7.2% per annum over the same period.

At the Annual General Meeting (AGM), the Board reaffirmed its 2019 distribution guidance of 39 cents per stapled security, which was 4% higher than distribution paid 2018. In 2019 February, Sydney Airport communicated that it is expecting to fully utilise its remaining carried forward tax losses over the next three years. Subject to operational performance and capital investment opportunities, the company currently expects to become a cash taxpayer from 2022.

During 2018, the retail revenue rose by 7.2% on the back of new leasing deals in Terminal 2, favorable lease escalations and good performances of the number of specialty stores. The revenue from Property business increased by 7.5% in 2018, while Parking and Ground transport grew by 1.7%.

In 2018, the Airport completed its precinct road network upgrades to increase its road capacity at T1 and it also reached an agreement with the NSW Government on the proposed Sydney Gateway corridor, which could enhance the access to the airport.

In the last five years, the Airport has invested significantly to reduce congestion and improve access to the airport. Further, the Airport is also investing in the electrification of its vehicle fleet. By 2021, the airport expects to operate electric buses on 100% of its landside fleet. The Airport is also working with its partners to encourage and support the use of electric ground servicing vehicles and equipment.

Building on its commitment to reduce waste, the Airport has worked with retailers to introduce a ban on plastic straws and one-time use plastic bags from 1st February 2019 in T1 and T2.

A world-class airline, Air New Zealand Limited (ASX: AIZ) recently announced the resignation of its Chief Executive Officer (CEO), Christopher Luxon. During his seven year tenure, Mr Luxon made an outstanding contribution to the airline. The company’s Board has commenced the process of finding the next CEO and expects the new appointment to be made in the near future.

Last month, the company updated its 2019 outlook, wherein it has highlighted that AIZ now expects 2019 earnings before taxation to exceed $340 million and its 2019 earnings before taxation to be in the range of $340 million to $400 million. The outlook was impacted due to the expectation of additional ~$25 million headwind from increased prices of jet fuel.

The company recently announced a multi-billion dollar investment in new fuel-efficient Boeing 787-10 Dreamliners, which will offer almost 15% more space for customers and cargo than the 787-9.

In the first half of FY19, Air New Zealand Limited reported operating revenue of $2.9 billion, which was 7.1% higher than the pcp. Further, the company reported earnings before taxation of $211 million, down 35% on pcp.

The company currently has initiatives in place to drive sustainable cost improvement, earnings growth and improved ROIC in the lower demand environment. In addition, the Airline is committed to continued investment to underpin the exceptional culture, to deliver a superior customer experience and to make strong commercial returns. The company is targeting a strong free cash flow generation over the next three years. 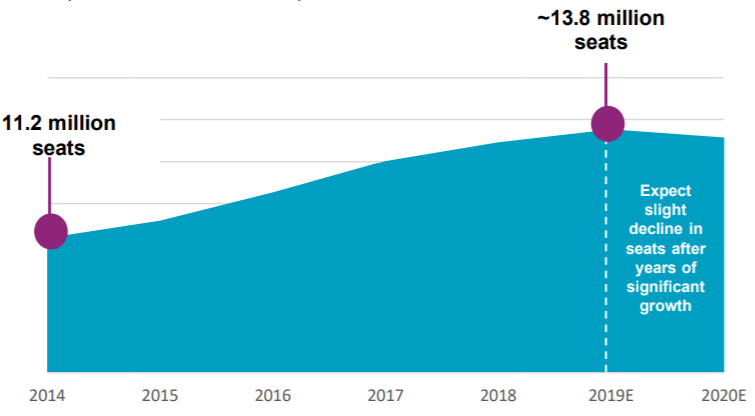 This year, the company faced some challenges, which impacted its financial and operational performance. The Rolls-Royce global engine issues impacted network and operating costs.

Currently, the company’s cost reduction programme is targeting $60 million in annualised savings by the end of 2021.

The Cost reduction programme is focused on the three key pillars:

Time and again, the company has assured that it will keep on making investments to enhance the customer experience. The company currently has partnerships with Boeing and GE, providing many advantages including:

The company has assured that it has attractive opportunities to achieve medium-term network growth of 3% to 5%. Further, it has numerous initiatives to drive strong revenue performance. Air New Zealand Limited has multiple levers to drive continued operational efficiencies and productivity in the future. The company is committed to disciplined capital deployment, with a focus on strong shareholder returns. In the recent past, the company has reduced its lowest fares across the domestic network in line with its Pacific Rim strategy.