A recent achievement has been the “exceptional results” (as Chairman Mr Andrew Van Der Zwan) calls them, from the on-going hand auger drilling on the Corridor South project at Zulene anomaly. Not only have the drill results defined another high-grade HMS zone, they have delivered a new high in terms of estimated average THM grade. 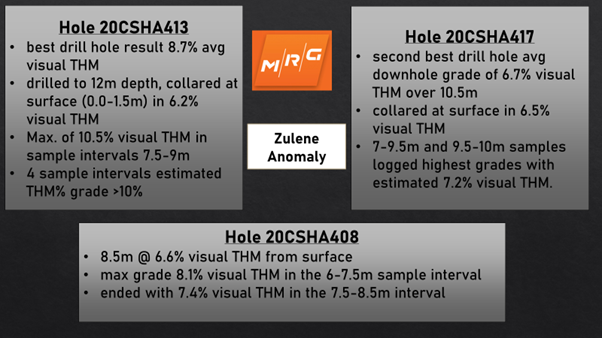 The best hole, 20CSHA413 is located near the southwest boundary of Nhocoene village. Its outstanding result provides an encouraging trajectory to other potential significant high-grade mineralisation near surface. The third best hole, 20CSHA408, was stopped early due to water being intersected and a dearth of sample return with sand auger equipment was noticed.

Covering a zone of HMS mineralisation, at more than 4 per cent estimated visual THM, Zulene anomaly has a current footprint of almost 5 km X 1 km. Though mineralisation remains open in all directions, the Limpopo River valley (Valley) restrains it on the west as well as the south sides.

The new zone of HMS mineralisation at the anomaly is almost 3 km south of the Siaia target, from where MRG Metals has recently unveiled drill results having defined a high-grade HMS zone, more than 5% visual THM.

The Company notified that additional follow-up Auger drilling will be needed at the Zulene anomaly to further define mineralisation outside the Nhocoene village boundary (along the flank of the Valley). 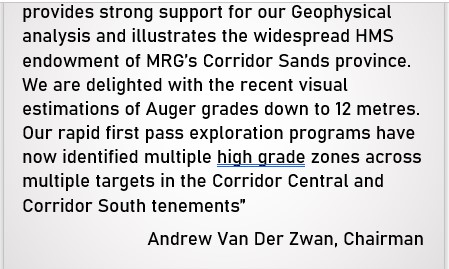 MRG Metals’ first target at the Corridor Projects, Koko Massava, has had its MRE already identify the capability for development of a multi decade mine. The Company’s continued exploration has well-focused on high-grading potential early mine life tonnage from surface.

With the exceptional Zulene results being an add-on and value of high-grade tonnage at or near surface, possibility of a reduced or nil strip requirement is significant. The Company now has several new zones (including Nhacutse and Poiombo) with this potential identified outside of the Koko Massava deposit.