Efficiently exploring for Heavy Mineral Sands (HMS) in the world-class region of Mozambique, MRG Metals (ASX:MRQ) has been on a development spree at its Corridor Central & South Projects (referred as the HMS Projects), acquired in 2019. It recently reported very significant results from the current hand Auger drilling process at Nhacutse target (the Corridor South project), the Company’s third target at the HMS Projects. 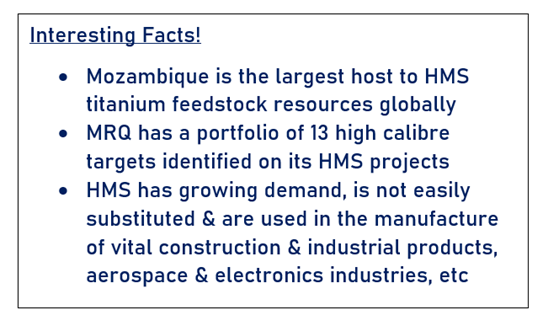 On 9 April 2020, MRQ reported that results from the hand Auger drilling at Nhacutse have been highly impressive. They have depicted expanded high-grade zones of HMS, over 5% visual THM (also at the Bungane target in Nhacutse’s Northwest’s realm.

The new visual outcomes of the wide-spaced drilling, in particular the holes 20CSHA311 till 379, showcase promising high-grade HMS mineralisation-

The wide-spaced reconnaissance hand Auger drilling (at Nhacutse and Bungane) was devised to discover the radiometric as well as magnetic anomalies and follow-up formerly defined high-grade mineralisation. The most significant results from the holes 20CSHA311-379 are highlighted under- 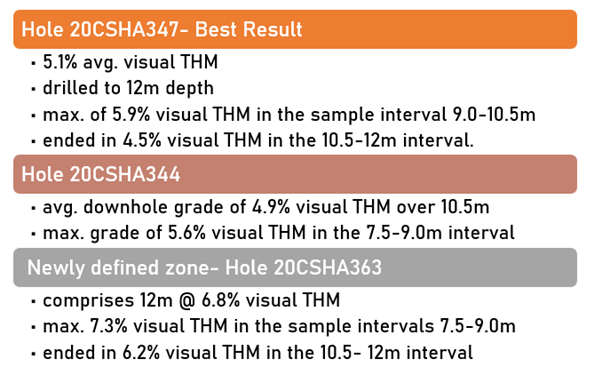 To date, the excellent Auger drill results from exploration on the projects has offered field data to assist a review of the target boundaries obtained from the airborne geophysical data.

The Auger drill holes were spaced at either 250, 500 or 1000m stations all along drill lines 500m and 1000m separately. The depths range from 1.0m–12m deep (avg. depth of 9.5m). Samples were collected (393 incl. QAQC samples in 58 holes) at 1.5m intervals downhole. Drill samples are split for export from the region to an HMS analysis laboratory in Perth for quantitative percent THM determination and heavy liquid separation.

Pleased with the results, Chairman Mr Andrew Van Der Zwan acknowledged the discovery of significant quantity as well as quality mineralisation in the extension Auger program at the third target, with several holes demonstrating an estimated THM grades exceeding 5%.

He further intimated that the Company will notify about the Koko Massava MRE next week post the Easter break. The Mineral Resource Estimate is likely to demonstrate a substantial milestone for MRQ.

What’s worth noting is the fact that the ongoing fruitful exploration validates the potential for supplementary mill feed for the first target, Koko Massava from other targets. It also outlines the potential for an additional stand-alone resource/ the amalgamation into a regional resource base.

Meanwhile, MRQ has been ensuring to meet the protective requirements stipulated in the declaration by the Mozambique Government pertaining to the “State of Emergency” orders amid COVID 19.