The ability to maximise probability of discovering globally significant mineral resources is a key objective of exploration companies. Well adhering to this objective, MRG Metals Limited (ASX:MRQ) has been exploring its Corridor projects at a district scale, situated in the world class HMS enriched region of Mozambique. The Company is a cost effective, technically driven explorer with a lucrative portfolio of 13 identified tenements at the projects.

On 27 May 2020, the Company provided an impressive update from the on-going hand Auger drilling on the Corridor South project at Siaia anomaly, where drill results have defined a high-grade HMS zone, more than 5 % visual THM.

The three shallow Auger holes drilled at Siaia (holes 20CSHA399-401) demonstrated uncut, average downhole visual estimated grades of over 3.5 % THM. They ended in sample intervals with estimated (visual) THM grades of more than 4 %. More very encouraging high-grade HMS mineralisation has been provided by the new visual results of the drilling (wide-spaced), from the holes.

Let us cast an eye on the specific drill hole results- 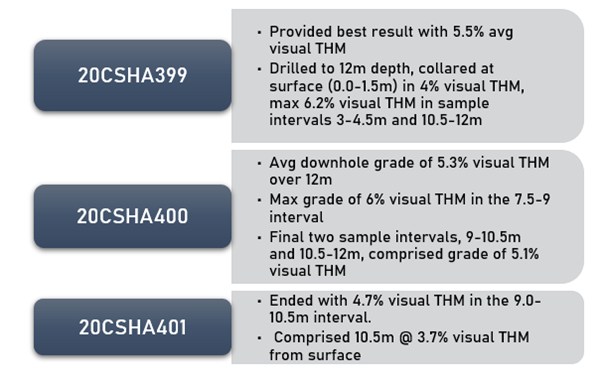 The relatively wide-spaced reconnaissance hand Auger drilling at the Siaia anomaly was devised to further explore the revised and prioritized magnetic and radiometric anomalies within the Corridor HMS district. Three drill holes were spaced at 500 m / 1000 m stations alongside drill lines that were 1000 m apart. Hole depth range varied from 10.5 m–12 m, with average depth being 11.5 m.

The drilling included three shallow Auger holes comprising 34.5 m with the collection of 23 primary samples at 1.5 m intervals, with each sample interval panned to estimate a visual percent THM grade.

The Siaia Anomaly had been on the list of future targets for MRG Metals. It comprises a zone of HMS mineralisation, at more than 3.5 % estimated visual THM. The current footprint of the anomaly is around 1.4 km X 1.1 km, with mineralisation still open in all directions.

The Company notified that the Siaia HMS mineralisation is contiguous with the Poiombo target mineralisation, using a 3.5% visual THM cut-off for average downhole grade.

Chairman, Mr Andrew Van Der Zwan stated that it is pleasing that the Siaia target has achieved high grade results from the initial Auger program, at a time when the Company’s exploration program continues in Corridor South with several Auger results pending.

Shortly, assay results and a further update from Poiombo are likely to arrive which have the potential to build several large zones that will be greater than 2-4 sq km of high grade THM from surface, down to 12 m (yet to be tested at depth).

The Company has also decided to conduct mineral assemblage analysis on these zones to support in setting priorities of Aircore drilling, based on number of successful zones identified.

While reconnaissance Auger drilling continues on other anomalies in the Corridor HMS district, MRG Metals remains open to potential interest from established industry companies who have the financial capacity and familiarity to partner with and take the Company’s discoveries to production phase.