Headquartered in East Victoria Park, Western Australia, Mount Burgess Mining NL (ASX: MTB) is an explorer and developer of mineral resource properties. The company, which was listed on the Australian Securities Exchange in September 1985, is primarily engaged in the exploration of Zinc, Lead, Silver, Germanium and Vanadium resources. MTB owns a 100% stake in the Kihabe-Nxuu base metal project, which holds potential for Zinc, Lead, Silver, Germanium and Vanadium. The project is located in Western Ngamiland in Botswana, adjacent to the border with Namibia. Its past discoveries include three kimberlites in Namibia and the Red October Gold Deposit in the state of Western Australia.

Recently, on 2 July 2019, Mount Burgess Mining updated the market that it has received very encouraging results from preliminary Sensor Sorter test work on 10 samples from the Nxuu deposit. The 10 samples weighed 20.66 kg from six HQ diamond core holes drilled into the Nxuu deposit. The company gave complete details of the samples that were lodged with STEINERT in an announcement with the ASX on 28 May 2019.

Zinc, lead, silver, germanium and vanadium pentoxide mineralisation in the Nxuu deposit occurs in the host Quartz Wacke, which is completely oxidised. 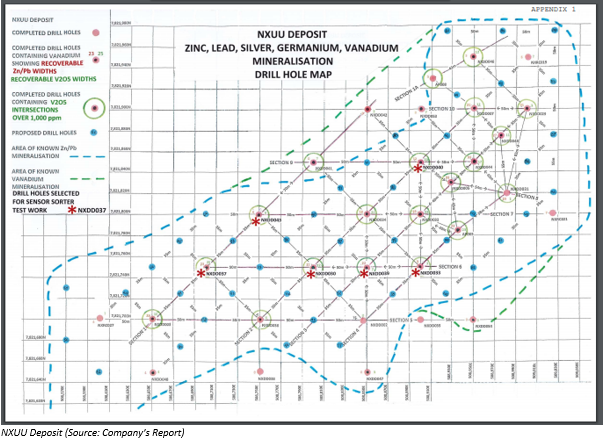 Through this test, MTB is targeting to boost the project’s potential profitability, in addition to lowering water and power requirements for the project. Moreover, the company is also aiming to reduce, where possible, the environmental impact of the project.

Listed below are the purposes, for which these 10 previously crushed samples were selected as the subject of this test work.

Test Work on V2O5- The test work was aimed at confirming the proportion of barren Quartz Wacke, so that it can be separated and rejected from the full mass immediately after crushing product from the V2O5 mineralised zones. This process could enable in identifying a smaller volume of upgraded V2O5 concentrate. This concentrate is then subject to the more expensive process of milling.

Test Work on Low-Grade Zn/Pb Zones – Test work was conducted to confirm the proportion of barren Quartz Wacke that is required to be separated and rejected from the total mass immediately after crushing the product from some of the known lower grade Zn/Pb zones. The purpose of this separation is to determine a smaller volume of upgraded Zn/Pb concentrate. This concentrate is then subject to the more expensive process of milling.

Below are the images of some of the individual drill hole profiles detailing the intersections selected for the above test work. 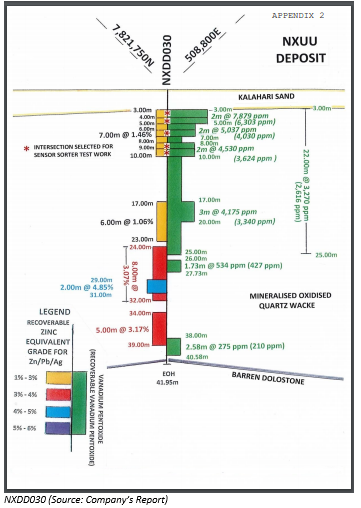 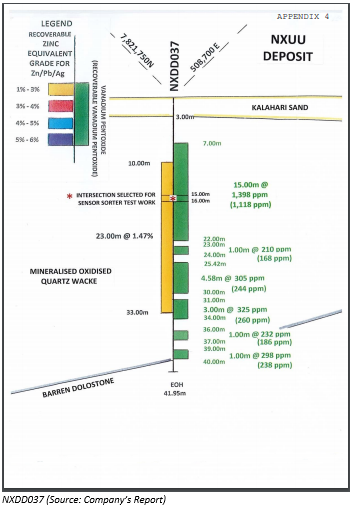 Meanwhile, 87% of vanadium pentoxide, 86% of lead, 78% of zinc and 64% of silver were reported to the concentrate from 100% of the average assayed grades of the total mass.

Results from the Sensor Sorter test work lead to the following outcomes:

The initial sensor sorter (sighter) test work program highlights an excellent early beneficiation step, along with the potential to have a significant positive impact on project economics. The STEINERT Ore Sorter was used to conduct the program.

MTB plans to go ahead with this, in order to test the higher (average and more typical) grade domains of zinc, lead and silver, with these grades expected to give a stronger signal for the Ore Sorter to deliver further improvement in pre-concentrate grades and recoveries.

Mount Burgess Mining, in partnership with the Chemical, Materials and Metallurgical Department of the Botswana International University of Science and Technology, plans to conduct mineralogical test work to determine the host mineral of germanium at both Kihabe and Nxuu Deposits. The department had approached the company for carrying out research for the purpose of maximising selective beneficiation within Botswana for the recovery of vanadium pentoxide, zinc, lead, silver and germanium from the Kihabe – Nxuu project. If successful, the project would result in socio-economic benefits for Botswana, as well as reduce the country’s dependence on diamonds.

The project power proposals follow a meeting between the company and BPC General Manager for Transmission and Distribution on 11 June 2019. During the meeting, it was unveiled that power line upgrades of BPC are likely to get completed by end-2019. The upgrades would enable MTB to get access to 20 MW of grid power from the upgraded Toteng/Shakawe line in Western Ngamilan.

However, in order to get the power access, BPC had asked Mount Burgess Mining to lodge a power link line proposal for the 20 MW of grid power from the Gumare sub-station to its project area. Based on the proposal, BPC would conduct a high-level cost estimate for such a link line.

Of the three proposals submitted by the company, one seeks grid power access by local villages en-route and beyond the required power destination of the project. For this proposal, the Government of Botswana will provide contributory funding, as the proposal is in line with the country’s vision of providing electricity access to all of its nationals.

Meanwhile, the company is in talks with several parties to obtain solar/hybrid power for its project.