Havilah Resources Limited (ASX: HAV) is an ASX-listed metal and mining company with multi-commodities minerals portfolio, focused on drilling copper, gold, cobalt and iron ore in the northeast region of South Australia. Besides, the company seems to be well positioned to be a key player in South Australia’s copper and future battery metals industry. 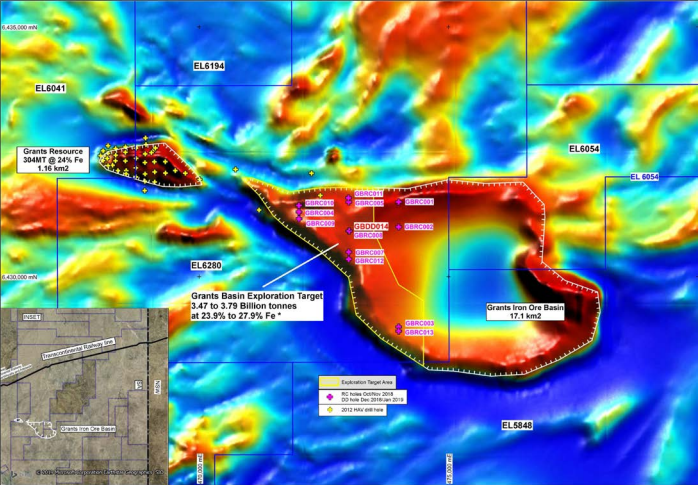 Dr Chris Giles, Havilah’s Technical Director, stated that the “these assays are broadly consistent with the assays in the adjacent reverse circulation drillhole, demonstrating that Havilah results have now been confirmed by two different drilling methods as well as by two different assaying methods.”

The Grant iron ore project is located approximately 12 km of the sealed Barrier Highway and the transcontinental Railway to Port Pirie and Whyalla. As per the 3D modelling report, the deposit forms a homogeneous hull-shaped body of iron ore. It covers an area of approximately 130 hectares with iron ore up to 180 metres thick from the surface, thereby reflecting the extremely favorable open pit mining characteristics of the Grants iron ore deposit.

Havilah’s management informed that the company’s wide-spaced drilling has so far covered just one-fourth of the Grants Basin’s area based on its aeromagnetic data interpretation. Moreover, the results from this drilling program allowed the company to form an estimate (announced on 5 April 2019) of an initial Exploration Target for the Grants Basin of 3.47 to 3.79 billion tonnes iron ore at a grade of 23.9% to 27.6% Fe.

The estimation was reportedly based on drilling performed and funded by SIMEC as part of their due diligence program to evaluate the commercialisation potential of Havilah’s Grants and Maldorky iron ore projects. With the solid initial target, the SIMIC Mining and Havilah have been more confident in their objectives to further explore the potential of this new iron ore discovery.

HAV now aims to carry out an infill resource drilling program, aimed at defining a JORC resource as part of the planned PFS, added Dr Giles.

As per the company, the parties have agreed to process the funding through successive equity placements in Havilah at a premium of up to 35% over 3 years’ time frame. If this equity placement goes through, GFG would own a 51% stake in Havilah. The funding would provide a financial backup to Havilah’s work programs for its copper tenements in Mutooroo Copper Cobalt District and iron ore assets in Maldorky & Grants.

Positive prefeasibility study of Kalkaroo: Driven by its copper strategy enhanced by cobalt, Havilah Resources achieved positive projects economics in the independent pre-feasibility study (PFS) of Kalkaroo. This translates the estimated pre-tax NPV7.5% of $564 million and IRR of 26% at USD$2.89/lb copper, USD$1,200/oz gold, at an exchange rate of AUD$: USD$0.75.

As per the report prepared by independent mining consultant RPMGlobal Asia Limited (RPM), the PFS results are highly favorable to support the company’s large-scale open pit copper-gold mine at Kalkaroo in north-eastern South Australia, near Broken Hill.

The consultant, therefore, stated: “There is sufficient confidence in the Mineral Resources for them to be utilised for Detailed Feasibility planning with no further exploration drilling.”

With an Estimated C1 cost of USD$1.67/lb and pre-production Capex of $332 million, the Kalkaroo operation is anticipated to deliver on average 30,000 tonnes per year of copper metal and 72,000 ounces per year of gold.

Havilah’s right to mine is secured by three Mineral Leases and two Miscellaneous Purposes Licences covering Kalkaroo, that were recently granted by the Department for Energy and Minerals. Havilah also owns 100% of the surrounding 998 km2 Exploration Licence 5800, which allows for expansion of the mining area via new Mineral Lease or Miscellaneous Purposes Licence applications if required.

The study has also mapped the mining plan that includes three long years to focus on mining the softer oxidised saprolite gold, native copper and chalcocite ore types at an annual production rate averaging around 4 million tonnes per annum, which is the nominal capacity of the oxide ore processing plan. Havilah believes that there is an outstanding potential to carry out further drilling down dip, along strike in a major mineralised fault zone, which could result in expansion of current resource base.

CLICK HERE FOR YOUR FREE REPORT!
Tags:
Mining News HAV