West Perth, Australia-based Galan Lithium Limited (ASX: GLN) is one of the burgeoning metals and mining sector players, being a part of the exciting global lithium revolution, which is currently flourishing as the world shifts towards clean energy alternatives.

Lithium production chains are evolving rapidly across the world, and the ramp-up in electric vehicle (EV) and battery facilities is forecasted to lift global lithium demand from 234,000 tonnes recorded in 2018 to more than 349,000 tonnes by 2021 (see figure below), as per the Australian Department of Industry, Innovation and Science (DIIS). 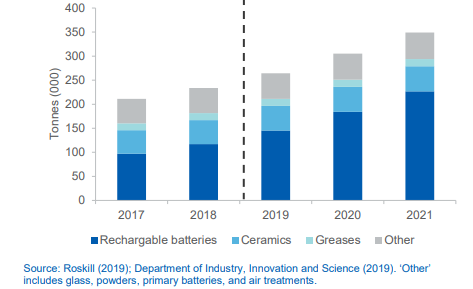 The exponential rise of clean energy is presenting a lucrative economic landscape and could be a boon for the energy metal explorers and producers. Other energy metals include graphite, cobalt, uranium, nickel, copper etc. 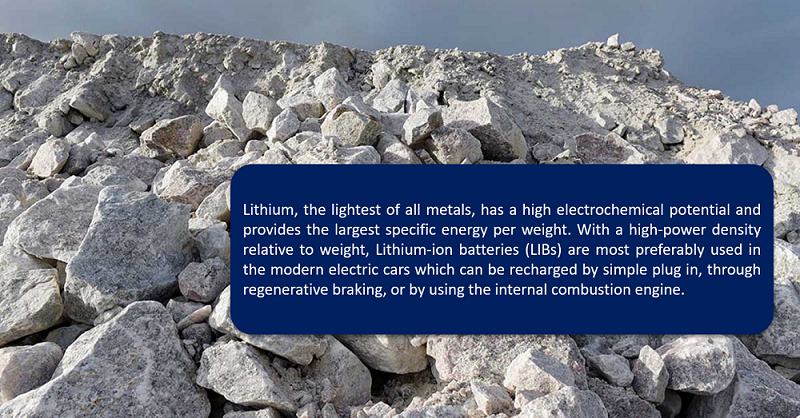 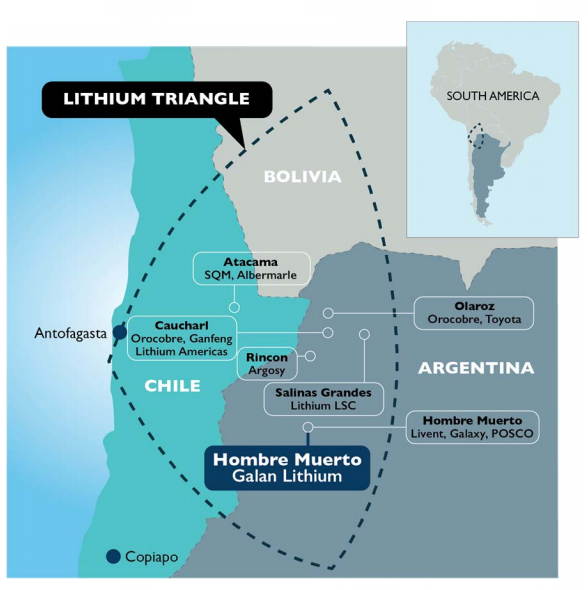 The company holds 100% earning rights in a total of 13 granted exploration tenements encompassed within the Hombre Muerto basin.

Today, on 22 July 2019, Galan Lithium has announced the latest positive results for the drillhole eight (C-08-19), marking the closure of its maiden diamond drilling campaign that was initiated in January 2019 at the Candelas Lithium Brine Project.

For drillhole eight (C-08-19), the laboratory results have indicated 70.4 m interval grading 744 mg/l Li with low impurities and the packet test returned a brine density of 1.80 with conductivities remaining >200 mS/cm.

In addition, drillhole eight also positively tested and confirmed the presence of high?grade lithium close to the eastern boundary of the Candelas basin, indicating a minimum 3.5 km strike and 2.5 km width extent in this northern portion of Candelas. Most importantly, the results for all drillholes have continued to demonstrate low impurity levels with Mg/Li ratios <2.80, similar to the neighbourhood projects.

Exploration Recap: The maiden diamond drilling campaign Stage I commenced in January 2019 at Candelas, a month after the permits were received from the Secretaria de Estado de Mineria – Gobierno de Catamarca, Argentina in December 2018. Stage I covered four drillholes (C-01-19, C-02-19, C-03-19 and C-04-19) and the results from all these far exceeded Galan’s expectations.

Encouraged by the indicated potential of the new target, the company consequently moved on to the Stage II of the drilling campaign in May 2019, which comprised of another four drillholes (C-05-19, C-06-19, C-07-19 and C-08-19), that have returned yet again outstanding results, reinforcing the confidence of the company in the project potential.

According to Galan Lithium Managing Director, Juan Pablo Vargas de la Vega, the company now has a fuller picture of Candelas that shows high grade continuity over a large area in the northern section of the channel.

More on Galan’s key personnel can be READ here.

With the data in place, Galan is well equipped to proceed and deliver a Maiden Resource Estimate (JORC 2012 compliant) for Candelas’ northern portion by Q3 2019, as was planned.

Preliminary Investigation of processing technologies: Recently on 3 July 2019, Galan informed the stakeholders that the company had commenced a preliminary investigation of prospective ion exchange technologies to process the lithium brines derived from the Candelas Project. The examination has been finalised after a six-month review into low-cost alternative processing technologies, and the results of the same will be incorporated in developing the Pre-Feasibility Study (PFS) for the project.

The due diligence into the suitability of ion exchange technologies is being carried out alongside other exploration and operational activities due to a longer lead time associated with the former work.

Way ahead – Galan Lithium has also informed today that SRK Australia, contracted to oversee resource definition, QA/QC, and review work, would be visiting Candelas this week as part of their ongoing oversight of the project and to initiate the Mineral Resource Estimation process.

The company has sent out brine samples to international laboratories to test lithium extraction using ion-exchange technologies with results expected in the coming months. Meanwhile, it is preparing to start the PFS as soon as the resource estimate is defined, followed by other studies in hydrology, environmental, logistics, marketing etc.

Moreover, by Q3 2020, a pilot plant would also be commissioned, as planned, to target the production of battery-grade lithium carbonate.