MinRex Resources Limited (ASX: MRR) is a metals and mining sector company with a key interest in the exploration of gold and base metal deposits present across Western Australia.

To date, MinRex has a portfolio comprising five projects (see Figure 1) listed below:

Also, in April 2019, the Company relinquished its Heemskirk Tin Project in Tasmania, due to the low levels of tin anomalism returned by the sampling programs completed. 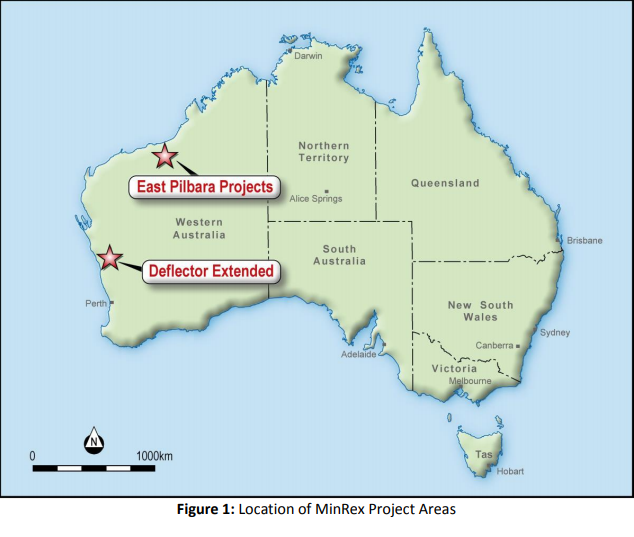 On 24 April 2019, MinRex released its Quarterly Activities and Cash Flow Report for the quarter ended 31 March 2019. Due to the extreme summer heatwave and wet season in the Pilbara and Murchison Regions, no field programs were completed on the Western Australian projects in the past three months. However, further work programs are now under planning and are due to commence as soon as weather conditions permit, following the very encouraging exploration results from the East Pilbara Project areas, during the past year.

Meanwhile, in the March 2019 quarter, a detailed desktop evaluation was conducted of the exploration programs completed so far by MinRex, and others in the past, at the Deflector Extended Project with an aim to generate new ideas and targets for further exploration programs in this area in 2019.

A glance at the previous exploration initiatives at East Pilbara

Thereafter, assay results from ten rock samples were collected from the Marble Bar South Project (P45/3039) and announced in February 2018. An additional 190 samples were subsequently collected, during a large detailed surface geological evaluation and sampling program on all four of the East Pilbara properties (including Bamboo Creek Gold Project and the Daltons Gold Project), in May 2018, and the results of this work were subsequently announced in June 2018.

A third exploration program in the East Pilbara was then completed in August 2018, whereby a total of 270 rock samples were collected and the results were later announced in September 2018.

During the last December 2018 quarter, MinRex finished the fourth exploration and metal detecting program, with full results announced on 10 January 2019. 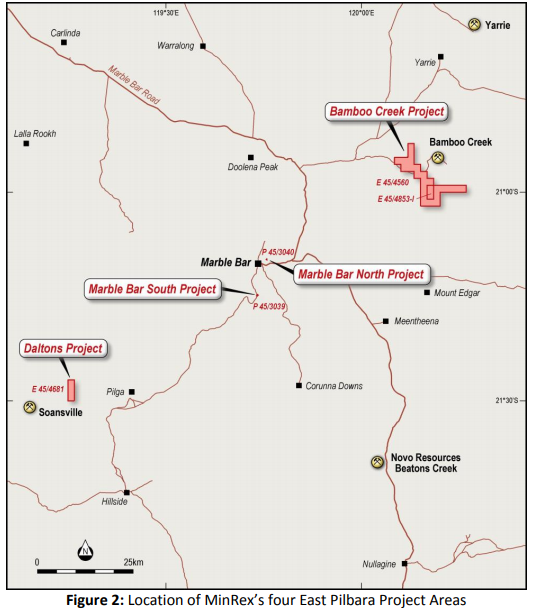