Junior gold exploration company, Krakatoa Resources Limited (ASX:KTA) has reached another milestone as it announces lodgement of an application with the NSW Resources Regulator to conduct a diamond drill program at its 100% owned Turon Project situated near Bathurst, NSW. This highlights the Company’s commitment toward the advancement of its fully-owned Turon Gold Project, situated near Bathurst, New South Wales.

The Turon Project contains two separate north-trending reef systems, the Quartz Ridge and Box Ridge systems that have demonstrated shallow gold targets up to 10m @ 1.64g/t Au from the surface to the end of hole and high-grade gold anomalism up to 1,535g/t Au in rock chips.

Related: Krakatoa Resources Announces Results from RAB drilling at Quartz Ridge Mine, Stock Up by 25%

The application has been made in anticipation to conduct a diamond drill program at its Turon Gold Project, positioned approximately 50 km east of KTA’s Belgravia Porphyry Gold Project. 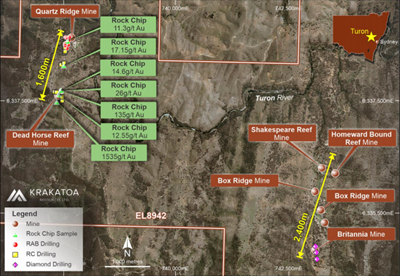 KTA seeks approval for up to 1,770 metres of diamond drilling at several exciting shallow gold targets at the Project. These gold targets are situated within the Box Ridge and Quartz Ridge line of workings which strike over 2.4 km and 1.6 km respectively.

KTA says that all holes were sampled throughout their developed length as a single composite sample of 10 metres and the anomalous results were certainly not followed up. Additionally, a chip sample north of the Quartz Ridge Mine, near the presently defined RAB drilling returned a peak value of 11.3g/t gold.

The two priority DGPR targets include:

KTA has reported DGPR interpretations from its survey of the historical Britannia Mine found within the Turon Gold Project and identified several other near-vertical or steeply dipping structures through the survey.

Going forward, KTA plans to commence drilling during the current month of July 2020.