FTSE-100 index inched up by 0.47 per cent (on 12th June when the market closed) from its previous day close. The Brent crude oil price was up by 1.04 per cent and WTI surged by 0.39 per cent to USD 38.95 and USD 36.48 per barrel, respectively, on 12th June (when the market closed). The oil prices improved because of the cue of growing demand. Among other macro events trending lately were:

Given the development in the oil price, we would like to discuss two resource stocks - Royal Dutch Shell PLC (LON: RDSA) in the energy sector and Rio Tinto PLC (LON: RIO) in the basic material sector. Both stocks are FTSE-100 listed. As on 12th June 2020 (when the market closed) both RDSA and RIO were in green zone and accelerated by 1.64 per cent and 2.25 per cent, respectively. Let us walk through their operational and financial updates.

Royal Dutch Shell PLC is incorporated in the UK. The Company is a global player in energy and petrochemical business. The company reports its operation under four segments, namely Integrated Gas which cover LNG activities, Upstream, which includes crude oil & gas exploration and extraction, Oil Products and Chemicals. 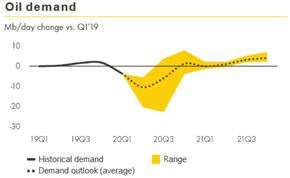 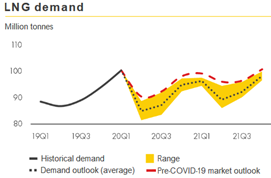 The company guides that as the pandemic unfolds, it will hurt the demand of the oil and gas. If the uncertainty remains, the company might have to cut its oil and gas production. The capacity utilisation of refining, chemical and liquefaction plants may be impacted. The Company has guided to cut its capital expenditure to USD 20 billion or lower for 2020 from the previous budget of USD 25 billion. The operating expense will be reduced by USD 3-4 billion.

Rio Tinto PLC is headquartered in the UK and listed on London and New York stock exchange. Rio Tinto PLC and Rio Tinto Limited (incorporated in Australia) are viewed as a single corporate entity merged in December 1995. Iron Ore, Aluminum, Copper & Diamonds and Energy & Minerals are the primary products of the company.

Operational Activities in 1Q FY20 and measures during the pandemic 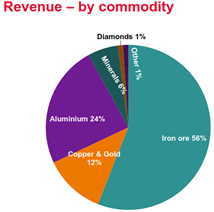 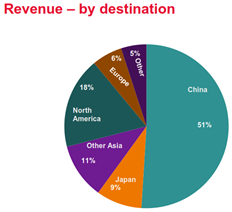 Covid-19 restricted the movement of goods during the lockdown. The Company has slashed its capital expenditure to USD (5-6 billion) in 2020 from the previous estimate of USD 7 billion. The reduction of capital expenditure planned during 2020 will be expensed in phases over the next two years. The Group has guided that in 2020 the production cost of Pilabara iron-ore will be USD 14-15 per tonne.