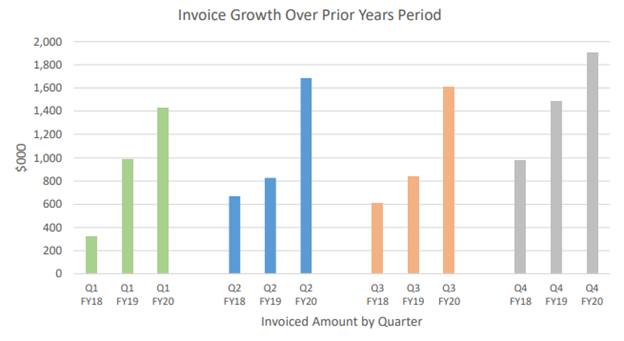 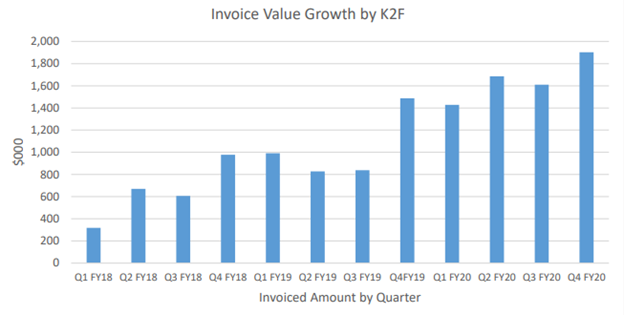 K2F has reported positive cash flow of AUD 0.66 million. As on 30 June 2020, the cash available was AUD 2.9 million. Also, there was AUD 1.13 million in receivables from Tier 1 clients. The Company was able to achieve net positive cash flow thanks to increased sales and cash receipts from customers in this quarter.

K2F raised (March through May 2020) AUD 1.719 million (before costs) from the exercise of 8,596,096 listed options that expired on 18 May. There was no discount offered to the Option exercise price of AUD 0.20. K S Capital Pty Ltd partially (60 per cent) underwrote the agreement.

In Q4, ATO granted K2F an R&D tax refund of more than AUD 88k. The Company has also applied for the government's subsidies and entitlements in response to the pandemic Covid-19. It reported no borrowings.

Furthermore, Software as a Service (SaaS) Annual Recurring Revenue (ARR) has increased to AUD 2.36 million. It represents a quarterly increase of 29 per cent and Compound Annual Growth Rate (CAGR) of 177 per cent. The Total Contract Value (TCV) for SaaS contracts is now nearly AUD 7.47 million, a quarterly growth of 57 per cent and a CAGR of 663 per cent.

K2fly has mentioned that RCubed's takeover helped it win many contracts with significant global mining clients. It has recently inked an agreement with Orano SA (Orano), previously known as Areva SA. The company is a global nuclear fuel cycle company with uranium mining operations. It is headquartered in France. As per the agreement, Orano will implement the RCubed resource governance solution for five years. The total contract value is over AUD 300k.

Also, the existing SaaS clients of company's RCubed and Infoscope solutions have also extended their licencing contracts. Teck Resources and AngloGold Ashanti have increased the deal for three years and Westgold for five years.

It is evident from the addition of new clients Sibelco, Orano, Kinross Gold and South 32 in Q4 that mining companies are appreciating the advantages of K2F's SaaS offerings. Based on undergoing discussions and negotiations, the company is confident of adding more new clients in 2020.

After getting new contracts in this quarter for K2F's RCubed resource governance solution, the net new annual recurring revenues for these deals have exceeded AUD 500k. K2F was targeting to achieve revenue acquisition performance milestones for RCubed over three years, and with this yearly recurring revenues, it has reached its final milestone. The revenue acquisition performance events have now been achieved in a mere thirteen months since the takeover.