Do you know that globally, almost 40% of the energy from various sources are used for the generation of electricity, which indicates the power sector’s dependence on various sources to meet the electricity needs. As per the International Energy Agency, our dependence on resources such as coal has grown to the extent that globally, coal accounts to almost 38% of the world’s power generation. Alone in 2018, over 1,576 Mega tonnes of coal equivalent were used only for power generation purposes and is expected to grow to 1,714 Mega tonnes of coal equivalent by 2024.

Now, coming to Australia, almost 60% of Australia’s electricity is generated by coal, natural gas in the second place contributes around 19% of the electricity generation. Although the national stats are in favor of coal, a higher dependency on coal means higher carbon emissions.

As the awareness over the climate change and carbon emissions grows, the global economies have come together on multiple fronts. Over 196 state parties came together at the Paris climate accord in 2015, to limit the average increase in temperature above the pre-industrial era to 1.5 degrees.

Transition to a clean electricity player

With the power generation being the topmost polluter, it is critical for the government to act and restrict the usage of such damaging sources. In order to feed the demand and that too efficiently and sustainably, renewable power sources are the only way to go.

Australia gears up to turnaround the energy mix and increase the share of electricity through renewable sources significantly. In fact, these are just not in the paper but is evident from the stats share by Australian Energy Market operator. 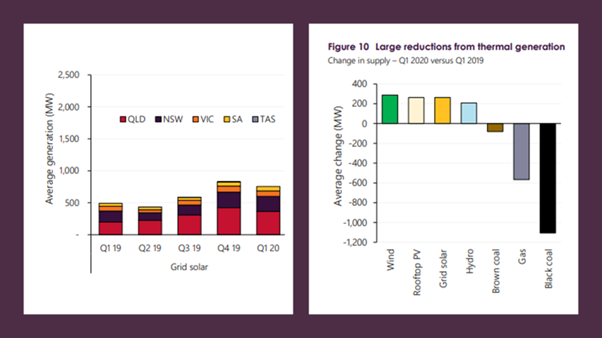 Coal, which ushered in the electric age has seen significant decline with the major replacement capacity coming online from Solar either through grid solar or Rooftop PVs. The state and federal government have already geared up to substantially increase the share of solar electricity generation.

At a time when the world looks forward to sustainably using solar cells at cheaper costs and higher efficiency, the Perovskite Solar Cells (PSC) technology is the most apt solution for our time..

The PSC technology has the following advantages:-

Similar to other disruptive technologies, the PSC technology is anticipated to quickly reach the point of inflection of the “S Curve”, following which adoption of technology will experience accelerated growth. Nearly all disruptive technologies and inventions have followed the S Curve trend including the most iconic example of mobile phones. The PSC technology has proved itself as the fastest advancing PV technology over the last 10 years. The energy conversion efficiency of PSC’s has improved at a remarkable rate. In only around half a decade the efficiency has improved to levels which took conventional solar cells to achieve over 5 decades.

Greatcell’s PSC technology offers amazing combination of high performance and low cost, making it very competitive for the PV technology of the future. Its technologically is more competitive in comparison to the widely used PV technologies including silicon, CdTe, and CIGS, with the benefit of extremely low cost of materials and simple manufacturing process.