While the world is currently grappling with the coronavirus impact, recently NASA put out a very alarming observation; based on the 11 satellite missions monitoring the Greenland and Antarctic ice sheets, the space agency revealed that the regions are losing ice 6x faster than they were in the 1990s.

Global warming is getting real, and governments across the world are scouting for sustainable solutions that are meaningful both in terms of scale and cost. Solar power has taken a prominent space amongst the policymakers to meet the green energy targets. It is to be noted that silicon photovoltaics remain the predominant choice as of now. Still, dependency on one technology and region would not be prudent taking into consideration how lockdown of few regions can lead to an unsettling scenario, as currently witnessed with the coronavirus lockdowns imposed in various major countries across the world.

In this backdrop, perovskite photovoltaics offer a viable alternative photovoltaic technology with a promise for extremely low manufacturing costs through solution processing that could compete with silicon.

Use of Right Technology and Strategy a Viable Solution

A team of researchers from MIT state that perovskite-based solar panels become sustainable if initially deployed in the niche market which requires a lower cost of investment and then eventually to venture into the market of silicon-based solar cells.

Coincidentally, Greatcell Energy’s strategy to begin with niche market such as Micropower for IoT (Internet of Things) for its perovskite-based solar panels matches with the recommended approach published by MIT researchers.

Why to First Invest in Niche Market?

The very first reason for this strategy is to avoid steep initial capital costs for perovskite-based panels competing directly with silicon base solar cells for large utility-scale installations. However, investing in higher-value niche markets and gradually expanding towards utility-scale solar power generation is more feasible. In this way, the initial investment of around millions or even billions of dollars to build a utility-scale solar power plant can be traded off with realistic ~US$40 million initial capital investment for perovskite-based solar panels manufacturing for more specialised application.

Hence in this way, the companies in perovskite manufacturing business can grow more economically and sustainably. The detailed "technoeconomic" analysis on this topic is published in Joule magazine on 06 February 2020, assessing how this promising technology can move from the lab to a significant position in the global solar market.

As per the "technoeconomic" analysis, the manufacturing cost during the start-up phase of perovskite for a specialised product would reduce, as the production capacity increases and ultimately creat stance for the large-scale solar power market. 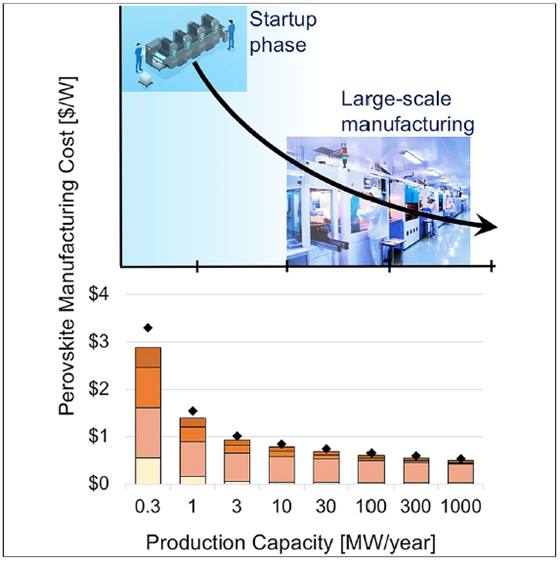 For the same, two analyses have been done to assess the sustainable growth of perovskite manufacturing based on R2R single junction technology and a perovskite-silicon tandem module.

A bottom-up cost modelling methodology is used for a roll-to-roll perovskite photovoltaic manufacturing scale. The study found that the cost falls from US$3.30/W to US$0.53/W for the flexible module as the factory size increases from 0.3 MW/year to 1 GW/year. Also, it is quintessential to mention that the study also demonstrated the economically sustainable annual growth rates for a company selling photovoltaic modules in different markets considering selling price and scale of manufacturing, as shown below. 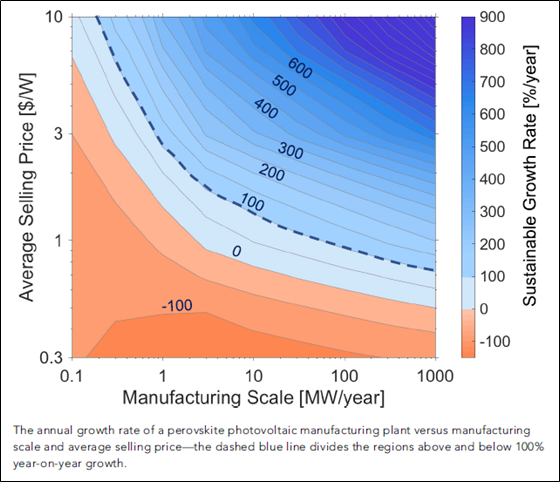 The above figure demonstrates the sustainable annual growth rates of perovskite manufacturing capacity vis-à-vis its selling price, assuming no demand constraint. For example, medium-size companies with a capacity of 10–100 MW per year with an average selling price greater than US$1/W are easily achievable for a niche market to attain a growth rate of 100%. This kind of return may attract venture capitalists who generally scout for a 100% Y-o-Y growth rate.

Interestingly, as discussed above, the result depicted that selling into the mainstream utility market requires investment in tune of US$1 billion to establish economic return of manufacturing facility at an average selling price of US$0.40/W, as depicted below. 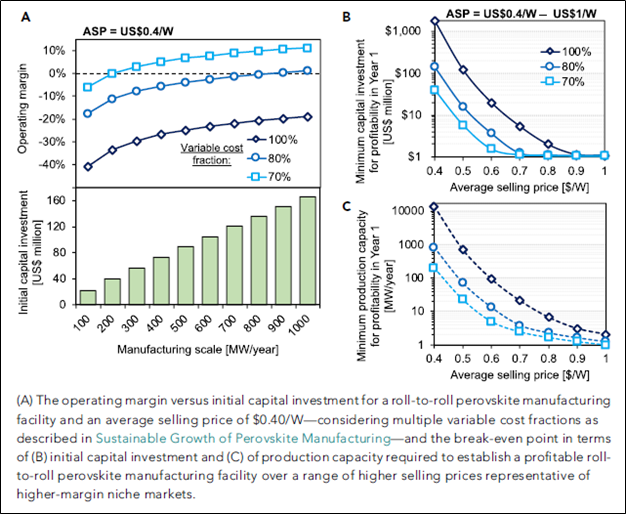 Having said that the technoeconomic model also suggested the ways to reduce this initial capital investment and a barrier to entry as shown below, that is in line with that of Greatcell Energy’s plan to initially commercialise perovskite in a different market than mainstream, i.e. Micropower for IoT.

The study also presented how an existing silicon manufacturer can expand at a faster rate by co-investing in tandems. This outcome is on the assumption that the perovskite manufacturing technology can be scaled-up successfully to obtain high efficiency with low materials costs. 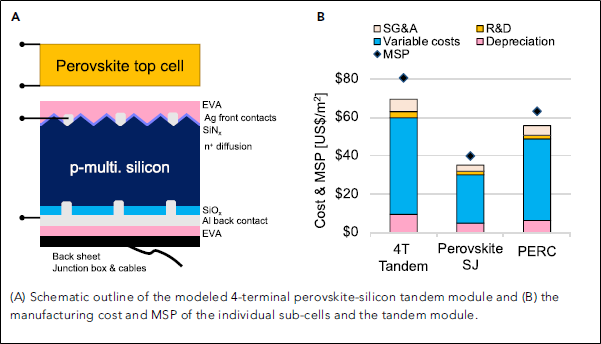 In tandem cost modelling they have considered production capacities at greater than 100 MW/year where the manufacturing costs per area are 31.63 USD/m2 and 50.64 USD/m2 for the single-junction perovskite and silicon modules, respectively, the 4-terminal tandem module is 63.07 USD/m2, with the efficiency of a single-junction module of 18% and the tandem efficiency of 25.8%.

For the same, a hypothetical manufacturing plant is modelled for over 15 years using both an independent and co-dependent growth model. The efficiency of 15% is used in all fixed margin scenario and for efficiency adjusted margin scenario 15% margin is used for single-junction modules and while the tandem module margin is improved to reflect the added value of high efficiency. The selling price of a tandem module is set at equal to the silicon single-junction dollar-per-watt price, resulting in a margin of 24%. 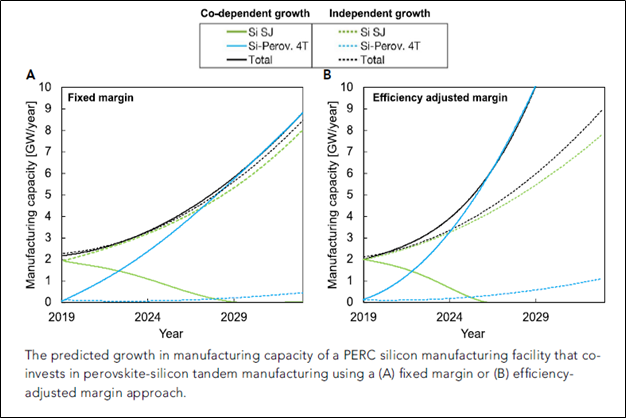 The MIT analysis presents that in co-depended growth, tandem manufacturing expands at a faster rate than silicon. This is because the cost split is done equally between the two technologies and with time silicon fades out eventually as the profit falls to maintain silicon manufacturing, rendering tandem the dominant technology.

In the efficiency-adjusted margin, the capacity is seen to be expanding faster than the fixed margin case. It also depicts that co-investing in a low-cost tandem via adjusted-margin scenario is an apt method for expansion of tandem manufacturing capacity at a faster rate.

Hence, it can be seen that the perovskite commercialisation is optimal and logical to start with the niche market first such as IoT or BIPV to mention few. Later, it can be expanded via co-investing method, resulting in high efficiency with low material costs, leading to commercialisation of perovskite in the mainstream market.