You may consider reading Tracing the Projects and Progress of GSN.

After receiving the first significant results from its 100% owned Cox's Find Gold Project in November 2019, Great Southern Mining, in its second leg of results, further announced high-grade results from RC drilling of the main high-grade gold lode at the Project on 4 December 2019.

The results comprised a further batch of 5 RC holes (a total of 17 have been drilled) holes which were completed beneath the historic Cox’s Find pit and confirm ultra high-grade mineralisation stretching from the historic underground workings that produced approximately 76,000 ounces of gold at an average recoverable gold grade of 22.6 g/t between the period of 1936 to 1942.

The major highlights are the assay results that have been received from the five new holes, with a high-grade zone been defined in the exceptional drilling results, which include:

GSN believes the ultra-high grade intersections to be consistent and in continuity with the historic production records in terms of width and grade reported from the development of the underground workings by W.M.C during operation which ceased in 1942 and add to the previous intersections through the main lode reported by GSN, at Drilling Update from GSN’s Cox’s Find Gold Project: Stock Trading Close to 52-weeks High.

Moreover, significant remnant mineralisation remains (which stays open down plunge and along strike) in the mining area were further confirmed by the high-grade intersections. 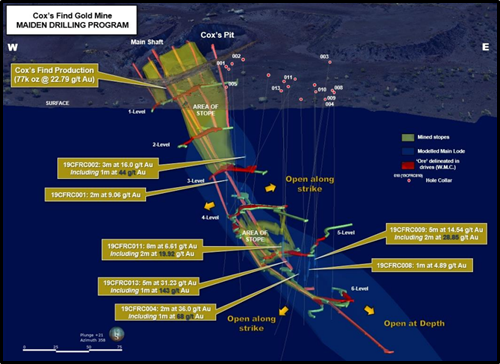 Following such results, GSN looks forward to reviewing, developing and implementing an exploration program to undertake resource definition drilling in the unmined panels as well as assess the down-plunge extensions of the Main Lode below 6-level.