The Australian share market continues to remain in the red zone amid the growing tension between the US and China. The benchmark index S&P/ASX200 ended at 5497 points, down by 0.96% as compared to Thursday's closure of 5,550.4 points.

The market has closed for the week, reflecting escalating tension between the world's biggest economies. US President, Donald Trump has been accusing China of spreading disinformation and propaganda over the ongoing pandemic. Now, the tension is further escalated with US threat on Chinese proposal to extend its power over Hong Kong by imposing new national security laws. However, Trump has threatened to sanction Chinese officials if the proposed bill passes into law.

Furthermore, Trump administration now wants to pull out of the treaty that permits to conduct observation flights over each other's territory. The 30-plus nations' deal was set up to promote trust. Amid already tensed and uncertain world environment due to the pandemic, if the US exits the treaty, it is expected to strain its relationship with Moscow and European allies.

The prolonged uncertainty in the market was reflected in the performance of all sectors as they all declined in today's market.

Let's see the graph showing the top best and worst-performing stocks on Friday. 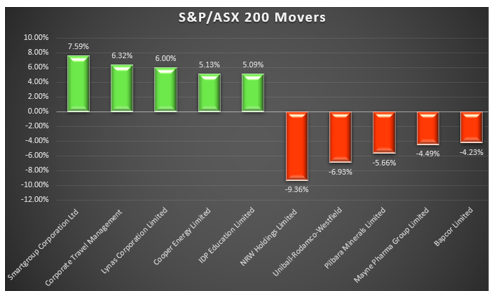