Mineral Explorer, Element 25 Limited (ASX: E25), developing its world-class Butcherbird Manganese Project (100%-owned) located in Tier-1 Mining jurisdiction of Western Australia’s southern Pilbara Region, has announced an Update concerning the COVID-19 pandemic. The Company employees and related contractors have all been working from home where possible while largely maintain social distancing to minimise contact and contain the spread of the virus, in line with the government guidelines.

The planner work programs are being continued wherever it is safe to do so. As a result, the Company continues to make excellent progress in relation to the development of the Butcherbird Manganese Project apart from some impact being observed on the provision of services by third parties.

At the same time, the Company Board is monitoring the situation around COVID-19 health and economic crisis while taking all the steps necessary to maintain safe working conditions for the staff.

In these unprecedented times, when operations are facing disruptions causing lack of cashflow for several companies, maintaining the optimal liquidity levels to keep the business afloat and going is very essential.

In line with that, Element 25 has announced that In order to preserve cash reserves, the Company Board, as resolved on 24 April 2020, has decided to issue options to the Managing Director and Non-Executive Director’s while also reducing the cash component of director fees by 20%. The fee reduction has been effective from 11 April 2020, subject to shareholder approval being received with respect to the issue of options. Once the shareholders’ approval has been received, the options would be issued at an exercise price of 20 cents. The 30-day VWAP of E25 shares was $ 0.146.

Also, the fee reduction is initially for a six months’ period and would be subsequently reviewed at this time or if required, would remain in place for a longer term as the operating climate returns to normal.

The Schedule of Options To Be Put To Shareholders In General Meeting is given below: 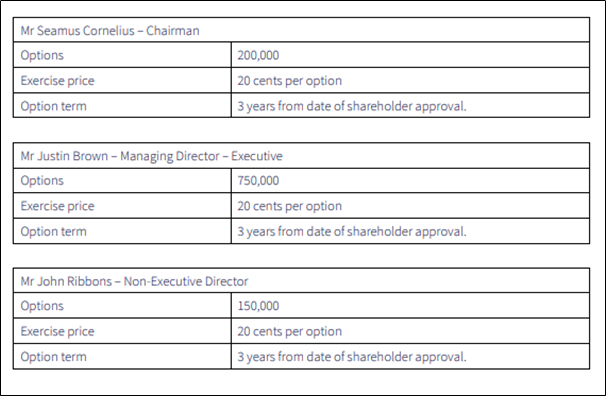 For the recent quarter ended 31 March 2020, Element 25 had recorded cash burns of $ 519k from operating activities including $ 479k on exploration & evaluation and ~$ 187k on staff, administration and corporate costs net of $ 142 k received in government grants and tax incentives. Meanwhile, the Company’s investing activities including proceeds from the disposal of tenements and investments resulted in cash inflows of $ 254K. Consequently, Element 25’s cash and cash equivalents at the end of quarter totalled ~$ 1.94 million as compared to $ 2.199 million as at the end of December 2019 quarter.

Thus, Element 25 currently has a strong cash position as the Company is working on progressing the Pre-Feasibility Study (PFS) for the Butcherbird Manganese Project to further confirm its commercial potential. The PFS would also help in developing plans for a potential start of production at the Project via a low capex manganese concentrate export operation, which is being envisaged as Stage 1 of a planned staged ramp up, that is expected to provide early cashflow for further strengthening the Company’s balance sheet. The cashflow would also provide the necessary funds for Element 25’s plan for a larger high-purity manganese production hub. 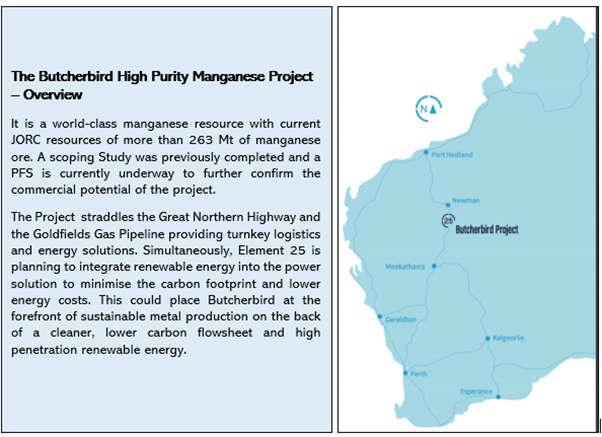 Furthermore, a PFSCON, which would demonstrate the potential economics of a staged start up strategy, is also underway and soon to be finalised. Meanwhile, Element 25 is exploring and considering integration of renewable energy into the power solution for the production process to minimise the carbon intensity of the Project while bringing down the energy costs.