In Europe, especially in Germany, investment continues for a transition towards renewable energy for vehicle and industrial applications. Major investment is underway in battery manufacturing segment for electric vehicles (EVs) in Europe, with over 300 GWh/a Li-Ion battery cell production capacity announced in the continent.

Currently, all German EVs are reliant on Asian battery anode cells. To reduce the dependence of German EV car manufacturers on Asian markets and to support a battery industry in Europe, the German Government announced support for three new battery alliances last year.

This has also created a lucrative market opportunity for Australian player, EcoGraf Limited (ASX:EGR) engaged in the production of battery-grade graphite (utilized as an anode in lithium-ion batteries).

The Company has so far received solid support from European customers where major investment is in progress in battery manufacturing for EVs.

The global expansion of electric vehicle markets is reliant on battery graphite, which is processed from natural flake graphite into high purity spherical graphite (99.5 per cent Carbon grade) used in lithium-ion batteries. 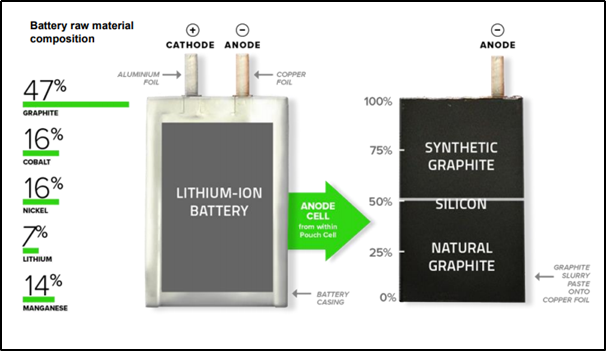 It is worth noting that each EV requires 27kg of natural (spherical) graphite, which can be produced from 54kg of natural graphite feedstock.

With China being the only supplier of natural (spherical) graphite, there is a considerable market opportunity for EcoGraf’s eco-friendly and cost-competitive alternative. Moreover, there is robust demand for an alternative non-Chinese supply by anode manufacturers outside China.

Graphite is one of the most important components and usually a weightiest constituent of lithium-ion batteries. It occurs in two forms: natural and synthetic graphite.

Both these types of graphite compete in the battery anode materials market; however, natural graphite has an edge over synthetic graphite in certain ways.

The following are the advantages associated with using natural graphite in lithium-ion batteries:

EcoGraf is developing a natural flake graphite business in Tanzania - TANZGraphite to supply high quality graphite products to its customers.

As Graphite is produced through crushing, grinding and flotation, it causes direct emissions from manufacturing. This has raised the need for an eco-friendly chemical process to produce high purity fine graphite products.

EcoGraf’s effectiveness has been demonstrated through a successful application to ten existing sources of natural flake graphite from Europe, Africa, Asia and South America. Moreover, extensive product testing by potential customers in Asia and Europe has validated the attractiveness of EcoGraf product as a high quality and cost-effective alternative to existing Chinese supply.

With major car manufacturers supporting the shift to new renewable eco-friendly raw material supplies, EcoGraf has brighter prospects ahead in the lithium-ion battery market. The Company is well-positioned to become a long-term supplier of environmentally benign graphite products (both natural flake and spherical) to customers in the international market.