The demand for battery (spherical) graphite is expected to grow exponentially across the world, owing to an anticipated growth in demand for lithium-ion batteries. Tapping this enormous opportunity, the Australian headquartered Kibaran Resources Limited (ASX: KNL) intends to become a significant supplier of environmentally sustainable graphite to fast growing battery and electric vehicle sector.

What is Battery Graphite?

The graphite product, battery graphite is used to produce anodes for lithium-ion batteries. It is a 99.95 per cent pure graphite product which is moulded and purified to meet the harsh physical and chemical specifications demanded by battery anode manufacturers, allowing it to survive the intense operating conditions of a battery in an electric vehicle.

To manufacture a more efficient anode product for the battery, the spheronisation process is implemented that decreases the surface area to enable more graphite into a smaller volume, creating a denser, smaller and more effective anode product.

At present, China is the only country that produces battery spherical graphite in commercial quantities, using hydrofluoric (HF) acid to achieve 99.95 per cent carbon grade. Hydrofluoric acid is an extremely toxic chemical which is essential to produce high purity battery and flake graphite in China. 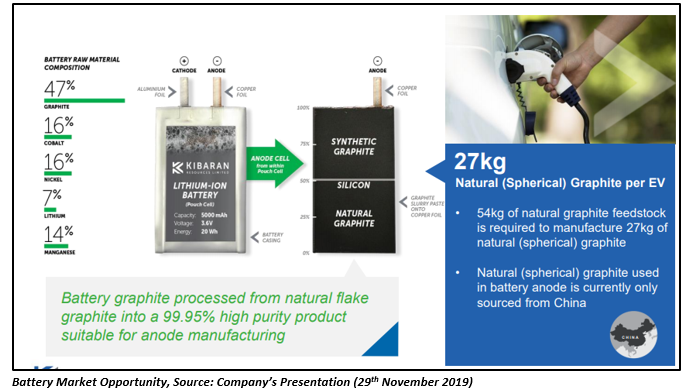 Shandong, Hubei, Heilongjiang, Inner Mongolia and Hunan provinces are the top graphite producing areas in China, wherein the manufacturers face an increased pressure due to occupational and environmental health and safety regulations.

With a rapid expansion in global demand for battery graphite, there is an increased customer requirement for a novel, environmentally sustainable and more geographically diversified sources of high-quality supply.

Moreover, automobile and lithium-ion battery manufacturers in Europe, South Korea and Japan are looking for an alternative eco-friendly supply of battery graphite to reduce their dependence on China and to prevent environmental impacts.

Kibaran has spent over three years and millions of dollars in refining a new environmentally benign and cost competitive purification process, EcoGraf, that offers a cost-efficient alternative to existing Chinese supplies.

Kibaran has also completed an optimisation study in Germany, concluding the successful application of its non-HF acid purification method to existing sources of natural flake graphite from South America, Europe, Africa and Asia. 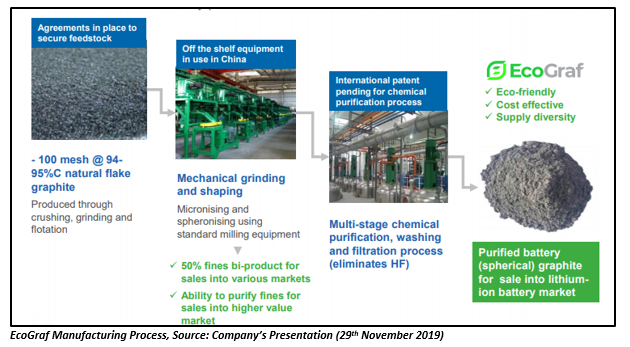 As per the company, the feedback from lithium-ion battery anode producers demonstrates that the demand from energy storage and e-mobility markets will continue to expand strongly in the future.

The outlook for long-term battery graphite remains positive with demand anticipated to rise by more than 700 per cent by 2025. This expected increase in demand is driven by a global expansion of electric vehicle markets.

The Benchmark reporting EV penetration rates are also likely to increase from 2 per cent in 2018 to 25 per cent in 2025, raising the need for ~800k tonnes of battery graphite, over six times the volume initially produced. As per Bloomberg New Energy, on current plans, the total battery cell production capacity is likely to exceed 1,000 GWh by 2025.

The growth in demand for spherical graphite product is coupled with an increase in demand for natural flake graphite, which is the feedstock. Kibaranâs vertically integrated graphite business caters well to this rising demand.

The companyâs Epanko Graphite Project is likely to manufacture 60k tonnes of natural flake graphite products every year. During the initial 18 years of operation, the Project is estimated to generate an internal rate of return of 38.9 per cent, annual EBITDA of USD 44.5 million and pre-tax NPV10 of USD 211 million.

The company has also received interest from Asian and European industrial organisations, while continuing discussions with many other potential strategic partners regarding equity investment in Epanko Project. Moreover, the Project holds considerable potential for additional graphite mineralisation to assist the extension of mine life and growth of operations.

The Kwinana production facility is likely to provide strong economic returns, as summarised below:

It is worth noting that Kibaran is well placed to meet the forecasted growth in battery graphite demand via its upstream and downstream businesses targeting the lithium-ion market.