The Nickel prices have been an exception to the conventional base metal basket. The silvery-white lustrous metal prices surged as the World's largest producer- Indonesia announced a ban on the Nickel ore exports from the start of 2020. It is to be noted that Indonesia had drawn an export policy allowing low grade and banning high grade Nickel exports until 2022. In August 2019, a full re-imposed exports ban was announced effective from January 2020.

Following the export ban, a huge upsurge of almost ~28% was observed in the Nickel prices in anticipation of the supply shortfall from Indonesia in future. It should be noted that China, the World's largest producer of stainless steel, relies heavily on Indonesian ore exports to produce Nickel pig iron (5-15% Nickel), which is a precursor to stainless steel. Also, multiple natural disasters in the Sulawesi and Halmahera regions (most prominent Nickel producing regions of Indonesia), further intensified the supply concerns.

Stockpiling efforts by NPI producers have already begun on the rising uncertainty of the supply shortfall and to what extent the Nickel industry would be able to recuperate against it, is to be closely watched.

Other Factors Driving the Nickel Prices

It becomes pertinent for the Nickel market participants to keep abreast with the other factors that influence the price dynamics, some such key price drivers:

EV Revolution a new Dawn for the Battery Materials

For a standard battery pack, the main materials required are aluminium, copper, cobalt, graphite/carbon, lithium, Nickel, and manganese. Over the years, the battery chemistry has worked towards higher Nickel content to generate higher energy density.

The demand from the battery sector is also rising with the increase in the EV adoption rates. The IEA goal of achieving 30% Global adoption rate by 2030 which on realisation would shoot up the Nickel demand.

As per the World Bank estimates, the Nickel prices are further expected to rise by 4.5 % in 2020.

With the Nickel projects in the pipeline and the delay in the start of the smelters and HPAL plants, Indonesia continued to export Nickel ore as per the previously allocated export quota system to the Chinese, until late 2019.

Chinese imports of the Nickel ore from Indonesia increased by almost 72% in 2019, as the Chinese traders hastily secured the Nickel ores before the ban came into effect from 1 January 2020. The global Nickel ore export rose to over ~56 Million tonnes in 2019 as per the Chinese General Administration of Customs and Reuters calculations. In the last month of 2019, Chinese Nickel imports increased by 60% y-o-y to 4.32 million tonnes, with Indonesia experiencing a surge of 82% year-on-year to 2.47 million tonnes.

In 2019, the consumption for Nickel would grow to 2.4 million tonnes, with a marginal increase of 2.5%. This is a slower growth as compared to previous years, mostly due to weaker economic conditions globally. The Nickel consumption till September 2019 grew in China by almost 13% due to the steel consumption but fell almost everywhere due to lower consumption in Japan and Indonesia.

The Nickel consumption would continue to increase at a steady pace, mostly due to the higher usage in China and strong demand could be expected from energy storage and electric vehicles markets.

With the positive demand outlook for the base metal Nickel, the focus on resource players catering to the growing demand is imminent. Let’s look at ASX listed focussed explorer -Corazon Mining Limited (ASX:CZN), that is backed by two quality projects the Lynn Lake Ni-Cu-Co Mining Centre and Mt Gilmore Project. 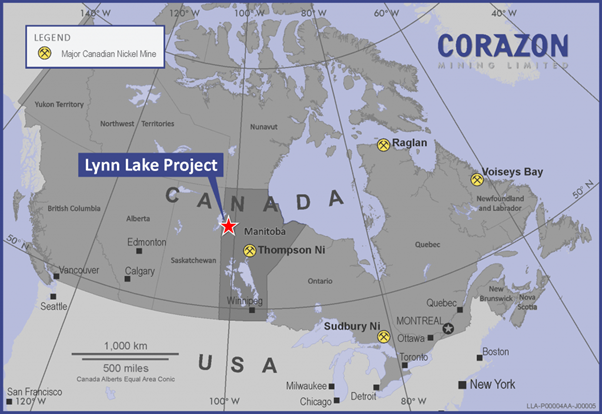 Corazon Mining has prioritised the development of its Lynn Lake Nickel mine. The brownfield mining project is located in the mining friendly environment of Manitoba, Canada. The project historically operated between 1954 and 1976, with the run of mine production of almost 20 million tonnes.

The global average 2019 Nickel Real prices stood at USD 13,394 a tonne as per the recently published Pink Sheet by the world bank, the value of the currently identified resources at Lynn Lake would be valued at USD 1.573 Billion with the resources cut-off grade of 0.5% Nickel.

The brownfield project provides an opportunity to emerge as a major producer of Nickel commodity in the times to come. Nickel, a strategic mineral would enjoy its acme, with the boost in the electric vehicle. The recent recovery in the Nickel prices has re-focussed Corazon on the Lynn Lake project.

Substantial mineral resource still remains, with more and more adding up due to extensive drilling programs which found mineralisation beneath the historic mining pits.

Right Project in the Right community and at the right time

To Sum up: Lynn Lake, the Nickel-Copper project with a possibility to operate at a large scale and at low cost in the matured mining environment of Canada, presents with the possibility to cater to the growing EV market in the future.