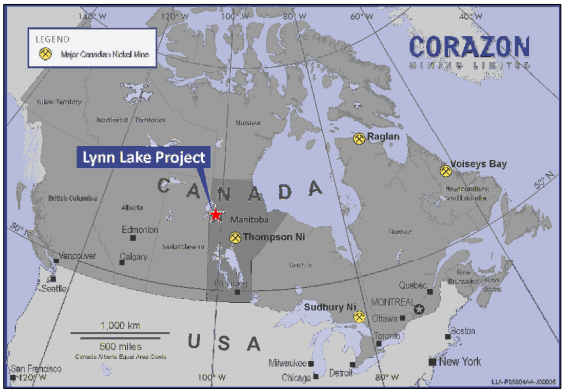 The assay results pertain to the 243.4 metres drilling program at the remaining 3 holes (LL2020_07 to LL2020_09) at the orebody A and offer excellent prospectivity of high-grade Nickel, Copper and Cobalt. The assay results support the planned and phased approach of the drilling programs such as the one from December 2019, which evaluated the potential of the high order Ni-Cu-Co mineralisation in the historically mined centres. Corazon believes that significant mineralisation is present not too far from the surface of the historical mines.

The December 2019 drilling identified additional prospective areas of high-grade mineralisation with potential to increase the mineral resources further. The superficial mineralisation would enable an easy and accelerated start-up which further helps advance to the future mining operations at Lynn Lake. In order to define additional areas of mineralisation, Corazon gives priority to the targets as per the following criteria-

The high-grade mineralisation results from the orebody A supports the strong potential for the project, several other superficial surface deposits within the large mining centre are yet to be scheduled for drilling. 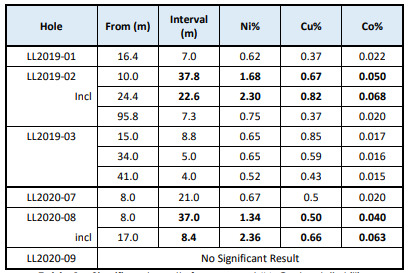 The A orebody was historically mined between 1953 and 1965, reporting production of over 4.8 million tonnes of ore with average grades of 1.07% nickel and 0.55% copper (cobalt not reported). The results from all the 6 drilling holes pertain to the region covered with infrastructure from the “A-Shaft” and processing plant area during the historic mining operations. The area inaccessible to historic mining operations is interpreted to hold substantial near surface high grade mineralisation.

The drilling was focussed on 80 by 220 metres area at the A orebody, around the historically mined high-grade massive sulphide. The mined massive sulphide mineralisation area can be described “pipelike” with dimensions 40 by 120 metres.

The superficial mineralisation substantiates the potential for an open pit operation at the Lynn Lake.

The recent drilling at the Fraser Lake complex focussed on new target identified by the geophysical programs, almost 5 kilometres south of the mining centre. The initial drill holes (FLC2020-22) corresponds to the target reaching right above the identified anomaly and displayed an increasing sulphide content varying between 1% to 8%, 490 metres downhole which also coincides with the geological model of the target.

Due to unsafe surface ground conditions with high water levels from the melting of the winter snowfall, the drilling program has been paused for now and is anticipated to resume once the water level recedes. The drilling at the first hole was ceased at 523.4 metres downhole depth on top of the anomaly.

The drill hole FLC2020-22 intersected the sulphide mineralisation from traces to disseminated and interstitial concentrations with up to 30% over small intervals. The dominating mineral being pyrrhotite with varying quantities of pentlandite (nickel sulphide) and chalcopyrite (copper sulphide). A strong sulphide mineralisation zone appears to have intersected the footwall of the Matrix High-IP anomaly and is on trend to a historic drill hole which resulted in an intercept of 22.6 metres with 0.70% nickel and 0.35% copper.

Using the geophysical methods such as magnetics, induced polarization (IP), electromagnetics and gravity, economic sulphide mineralisation at the FLC has been identified. The systematic approach of identifying anomalies which are being drilled was best identified by ground magnetics which was further analysed using magnetic vector inversion (MVI). Ever since 2019, Corazon has been using MVI for identification of mineralisation at depths of at least 600 metres which immensely helped in defining the drilling targets at the Fraser Lake complex. The current drilling at Fraser Lake is flat on the magnetic features lying at the basal contact of the intrusive system. The peak and base of the FLC intrusion systems are interpreted to be 450 and 500 metres below surface respectively.

A combination of systematic exploration and advanced exploratory techniques such as MVI allows Corazon to efficiently explore the mining centres even the ones at higher depth. Usage of advance technologies also increases confidence in the exploration program to uncover large scale high order mineralisation systems.