The world of mobility is undergoing a major transformation, and market leaders such as Tesla are leading the way to a cleaner and reliable medium of transport for the future.

Such statements are not only made by CEOs of EV manufacturers such as Tesla but also by flagship muscle car makers and poster boys of Internal Combustion Engine (ICE) of the likes of Ford, which proved its allegiance to the electric future by launching the Ford Mustang Mach-E, the electric version of the iconic Mustang, promising the same exhilaration as its ICE counterparts.

The EV production would require increased and stable battery minerals in future. Also, the trending decentralised virtual power plant concept would further inflate the demand for energy storage and its key ingredients.

2020 An Exciting Year for Cassini Resources: Must Read

West Musgrave is Australia's largest undeveloped Ni-Cu project, with Cassini holding 30% of the stake and JV partner OZ Minerals owning the remaining 70%. Initially, the project area was explored by BHP Billiton, resulting in the discoveries of the Nebo-Babel (Ni, Cu) deposits in 2000, followed by the Succoth copper (Cu) deposit in 2013.

Ownership Structure of the Project

Cassini-OZ Minerals signed a 3-stage farm-in/JV agreement in 2016 involving a minimum funding of $36 million into exploration and development expenditure. The stage 1 of the agreement was achieved in November 2017 with the completion of a Further Scoping Study (FSS) on the development of the Nebo-Babel Deposits. Stage 2 involved the Pre-Feasibility Study (PFS), while the 70% earn-in milestone was completed in April 2019.

The Pre-feasibility study of Nebo Babel was extended in last September to include additional identified opportunities and is scheduled to be completed within Q1 2020. The prospects included in the West Musgrave are as follows, with the Nebo Babel on priority for development-

The PFS update in September 2019 reported a JORC code compliant mineral resources of 238 million tonnes of nickel, copper and cobalt rich ores at a cut-off grade of 0.25% nickel. 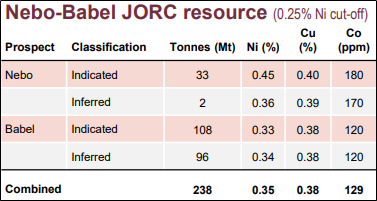 With the recovery in nickel prices since late-2018 and the inventory stocks circling the 6-year lows, Nebo Babel presents an opportunity to position Cassini in the market at the right time and in the right commodities.

Nebo Babel is one of the largest nickel sulphide development projects in Australia with a scale comparable to tier 1 assets of global majors such as BHP Billiton and Norilsk Nickel.

The current life of mine extends beyond 15 years with the possibility of further extension and exploration and development of future prospects. The planned operations are scheduled for a 10 million tonnes throughput capacity, enjoying economies of scale. The beneficiation route would include SAG Mill, Ball Mill and bulk flotation flowsheet to lower down the operating expenses.

The project lies in the second quartile of the C1 cash cost graph for the Australian nickel producers, significantly lower than its peers. 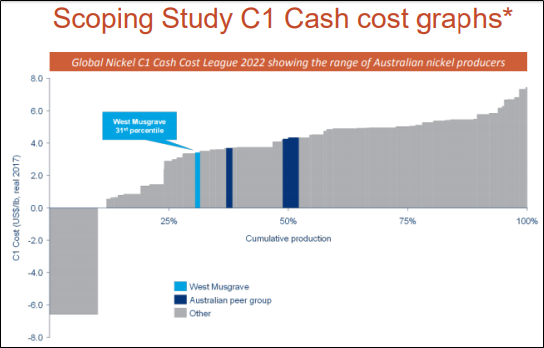 The significant by-product credit of copper and cobalt would help maintain control on the OPEX. The LOM operating expenses reduction is also credited to the Solar-Wind-Diesel power plant. The expenditure would further be optimised using the appropriate methods (Loesche mill under consideration).

Succoth and One Tree Hill

The exploration program at the Succoth and One Tree Hill deposits consisted of RC drilling, with results from the deposits and RC drilling identifying mineralisation zones.

The geological understanding of the region has advanced with the completion of an infill drilling program in the central part of the deposit. The recent drilling results indicate the folded geometry model at Succoth, which affects the mineral resources model, the potential mining strip ratio and the economics of the mining operation.

Cassini and OZ Minerals are continuing to identify and estimate the resources potential of Succoth. An optional study is under consideration, as part of the feasibility study of Nebo-Babel.

The exploration results and economic studies so far indicate the possibility of a world-class low-cost nickel sulphate operations. Further feasibility and economic study would decide the structure of the project and its capabilities to fulfil the increasing battery cathode materials demand.