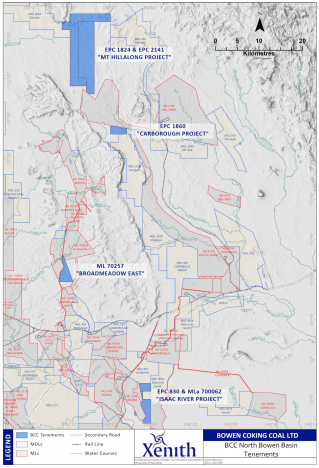 Xenith Mining Consultants, independent consultants for BCB, have issued a JORC compliant Resource Estimate of 33Mt at the project and has identified that Leichhardt seam of the Rangal Coal Measures contains the coal resources of the Project. Other findings include:

BCB had initiated the analysis of the washability data and has determined that the coal can be washed at lower density levels to create higher-quality coking coal while still producing a high energy secondary thermal coal.

Consideration for the Acquisition

The consideration for the transaction comprises of the following:

Capital Raising to Finance the Acquisition

In addition to this, the Company has executed a capital raising pursuant to an offer made to unrelated sophisticated and professional investors and has received firm commitments to raise a total of $2.25 million (excluding costs) by the issue of 45,000,000 fully paid ordinary shares at a per share issue price of $0.05.

Bizzell Capital Partners acted as a lead manager for the capital raise transaction which is well supported by two European Funds and by local investors involving Mr Stephen Bizzell. BCB looks forward to employing the proceeds from the capital raising towards:

Now, BCB looks forward to engaging with Peabody towards the finalisation of the transaction at the earliest possible time and thereafter direct all its efforts to ensure that the project is in shovel-ready position as soon as possible.

BCB is at an advantage due to the availability of existing regional infrastructure and that the project has a low capital intensity and short development timeframe.  Commencing immediately, BCB shall evaluate several mine operations options in order to determine the best value proposition.

The New Lenton Joint Venture (Formosa Plastics Corporation & New Hope Corporation Ltd) owns both the CHPP and TLO and had acquired adjoining mining leases and connected infrastructure from Peabody as part of the proposed development of the New Lenton Project.

However, Peabody had retained certain access rights to the CHPP and TLO in that transaction, which have now been granted to BCB as part of the current transaction.

In addition to this, several other wash plants exist in close proximity to Broadmeadow East, which can be used as an alternative if the timing of the re-commissioning of the New Lenton Joint Venture CHPP by the current owners does not line up with the development schedule of BCB.

Subsequent to the completion of the environmental impact assessments, application for a site-specific EA shall be made. Moreover, coal washability optimisation shall be undertaken in terms of quality, yield and final product specifications aiming to determine the optimal configuration to boost financial value.

Out of the several advanced exploration and development assets, Broadmeadow East is now the most advanced project in BCB’s current portfolio of near- term coking coal development projects of the Company.