Companies under the communications sector provides access to services like data, voice, video over wire, wireless networks and many more. This sector has improved the way people interact due to enhanced connectivity. Owing to rising demand in internet connections and mobile connectivity, telecommunications industry is competent to generate higher revenues in the coming years.

However, a decline in demand from fixed line services can hamper the revenue generation. Households in Australia pay a high price because of the exceptional structural traits of the Australian telecommunications market. Also, 2019 was marked as a crucial year for the industry as a number of situations play out.

The recent merger of two big companies Telstra and Optus gave a solid competition in the market, generating a greater scale and an ability to bundle and cross-sell mobile and fixed services. Increasing rumours for the launch of 5G services are attracting and retaining customers, giving the companies opportunities to plan new apps, which will drive growth in the coming years.

Rapidly evolving and rising products and services for instance, Skype, WhatsApp and Zoom, are bringing the significant change in the telecommunications sector. Educational and Entertainment services are directly accessible on mobile phones, leading to a broad and expanding range of services available to customers.

Telstra Corporation Limited (ASX: TLS) is a telecommunication carrier which provides information and telecommunication services, including mobiles, internet, and pay television to domestic and international customers.

Dividend/Distribution – TLS: The company declared a fully franked dividend of 8 cents per share on ordinary fully paid shares (for the 6 months period closed 30 June 2019) which was paid on September 26, 2019, bringing the total dividend for FY19 to 16 cents per share, hence returning $1.9 billion to its shareholders.

FY20 guidance for NBN Co’s Corporate Plan: The company has recently updated its FY20 guidance after the NBN company’s corporate plan of FY20. The change in NBN guidance impacted the Telstra’s cost reduction to decline from $660 million to $630 million, total income to lie in between $25.3 billion to $27.3 billion and updated EBITDA guidance of $7.4 billion to $7.9 billion. The company does not expect FY20 period to be the peak NBN headwind year and presently expects it to take place in FY21 period. 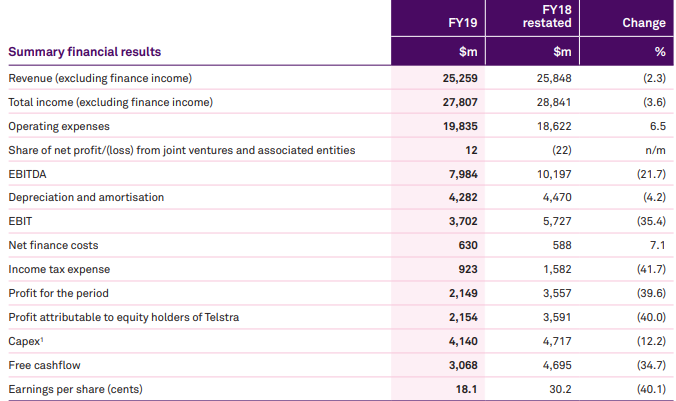