Why is the Market Value Slumping for Qantas today, How about other ASX Travel Stocks?

The travel and tourism is one of the largest industries in Australia and has marked the success in tourism growth. This has two major categories of tourism expenditure: Spending by Australian residents within Australia and spending by foreign visitors to Australia. Tourism is distinctive amongst the class of industries as the output is determined by the expenditure in order to measure the GDP growth. Another important aspect to measure the GDP growth is to differentiate between the expenditure evidently.

Let us now have a look at some travel stocks!

Qantas Airways Limited (ASX: QAN) is engaged in services related to global and domestic air transportation, the sale of international and domestic holiday tours, along with the related support activities comprising of catering, information technology, ground handling and engineering and maintenance work.

Recently, Qantas announced that the foreign persons hold 35.78% in the issued share capital of Qantas and hence meets the MSCI requirement of foreign room of 25%, therefore, it is in a position to qualify for inclusion in the MSCI Global Investable Market Indexes.

Flight Centre Travel Group Limited (ASX: FLT) is in the business of travel retailing in both leisure and corporate sectors plus in destination travel experience in businesses including tour operators, hotel management, destination management companies and wholesaling.

FLT has boosted its Australian leisure business with the 100% acquisition of the Ignite Travel Group allowing deployment and integration of Ignite’s product suite through FLT’s leisure network. 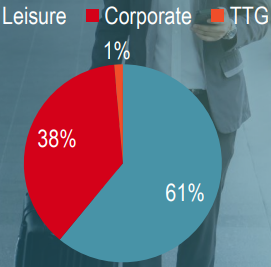 Webjet Limited (ASX: WEB) is in the business of online sales of travel products including flight and hotel rooms. WEB launched WebBeds in 2013, which is the fastest-growing accommodation supplier to the travel industry.

Dividend/Distribution and the notice of AGM:

Also, 2019 Annual General Meeting of Webjet will be held on 20 November 2019 in order to discuss the Financial statements and reports, Remuneration Report, Election of Director etc.

WebBeds delivered a total of $2.2 billion TTV in FY19 and an EBITDA of $67.3 million. It is a multi service app in China with market cap of USD65Bn and the largest air ticket and hotel provider in India. 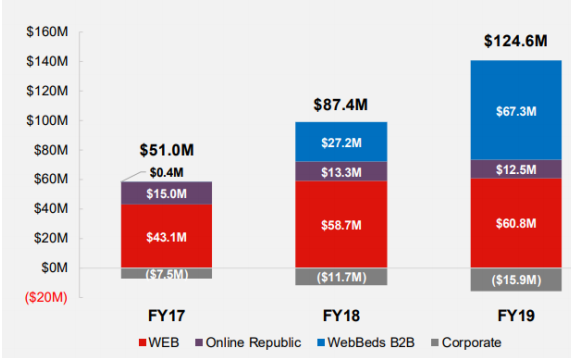