According to the Australian Steel Institute, Australia has a dynamic steel manufacturing and processing value chain that is at the centre of its economic growth while contributing approximately AUD11 billion to the country’s Gross Domestic Product. The steel industry comprises small, medium and large firms that together generate an annual turnover of around AUD29 billion. Steel is one of the most versatile, lustrous, malleable and recyclable materials in the world. Today on 7th June 2019, the S&P/ASX 300 Metals and Mining Index closed at 4,292.4, up 1.5%.

The third largest manufacturer of coated and painted steel products globally, BlueScope Steel Limited (ASX: BSL) is headquartered in Australia. The company has a successful track record of global partnerships that enables it to flourish in broadly diverse markets.

It is a leading international supplier of steel products and solutions, and produces flat steel for clients in Australia, New Zealand and the US. The company’s best performing steel plant ‘North Star BlueScope Steel’, in the Unites States, has delivered continuous financial success including impressive returns on invested capital.

The company published a presentation on ‘Asia and North America Investor Meetings’ in March 2019. BlueScope highlighted that the company has seen a significant transformation over the last five years, with a step change in its earnings quality, cash flows and balance sheet strength. 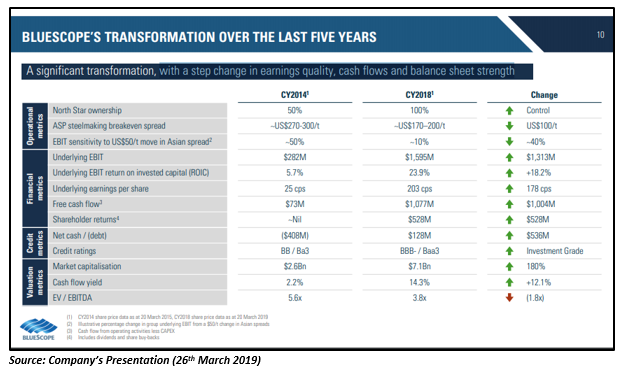 On 25th February 2019, the company announced its 1H FY2019 results, reporting a net profit after tax (NPAT) of AUD624.3 million. The NPAT rose 42 per cent in comparison to the 1H FY2018 figure. Let us take a look at the segment-wise results of the company: 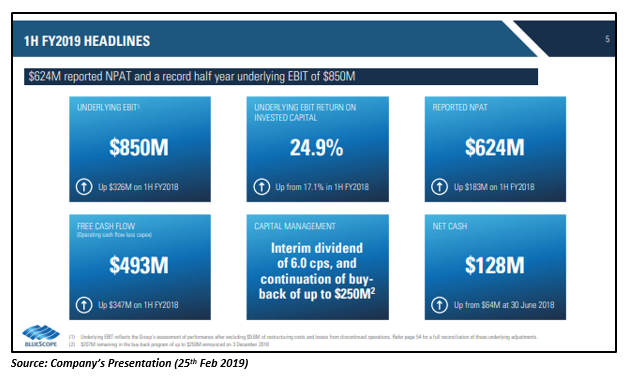 On 3rd December 2018, BlueScope announced a new share buy-back program of up to $250 million as a part of its FY2019 capital management program. In an announcement, the company declared that it will conduct an on-market buy-back of 537,058,317 fully paid ordinary shares valuing up to AUD250 million on or before 30th June 2019.

On 25th February 2019, the company unveiled an unfranked interim dividend for a six-month period. The dividend amounted to AUD0.060 that was to be payable on 2nd April 2019. The declared dividend had the record date and ex-date of 4th March 2019 and 1st March 2019, respectively. 100 per cent of the declared dividend was unfranked one with Dividend/Distribution Reinvestment Plan (DRP) applicable on it.

The current annual dividend yield of the company is recorded at 1.31 per cent (As per ASX as on 7th June 2019).

The company’s stock closed higher on the Australian Stock Exchange on 7th June 2019 at AUD 10.930, up by 2.054 per cent relative to the last close. Around 3.8 million shares were in trade and BSL reported a market cap of AUD 5.59 billion. The company’s stock fluctuated between a high and low value of AUD 10.95 and AUD 10.78, respectively during the intraday session. The stock has delivered a return of 83.39 per cent in the last five years.

Consumer staples are essential products such as food, beverage, household goods and feminine hygiene products. Items like pharmaceutical drugs, alcohol and tobacco also come under consumer stables. These products are usually considered to be non-cyclical, implying that they are in demand throughout the year and impervious to business cycles (fluctuations in the economy). It is perhaps due to this characteristic, that investors who are risk averse and seeking consistent growth, solid dividends, and low volatility are always looking to choose stocks in the consumer staple domain.

Australian dairy sector player Keytone Dairy has been lately catching investors’ interest. A quick flick through its recent updates is as follows.

Keytone Dairy Corporation Limited (ASX: KTD), based in Sydney, Australia and headquartered in Christchurch, New Zealand, is engaged in the manufacturing, packing, and export of dairy and nutrition products.

On 30 May 2019, Keytone released its Annual Report for the year ended 31 March 2019 (FY19) and an update on the recent contract secured from Walmart (China) Investment Co., Ltd.

As per the figures revealed, Keytone has delivered strong top line growth through the FY19 transitional year.

The past one year witnessed rapid expansion and investment following the success of Keytone Dairy Corporation’ ASX Initial Public Offering (IPO), which was substantially oversubscribed at the upper end of the subscription range and raised around AUD15 million.

At listing, Keytone Dairy had a market capitalisation of AUD30 million (as per IPO issue price of AUD0.20 per share and following the raising of AUD15 million). The company’s share price closed 80% up on its first day of trading and has performed strongly since then. Today (7th June 2019), the KTD stock closed the market trading at AUD0.525, up 2.941%. The market cap stands at AUD76.5 million.

The company recorded a 23.1% rise in its total sales revenue to AUD2.51 million for FY19 compared to the prior year FY18. As a result, its compound annual growth rate (CAGR) in sales revenue stands at 26.4% since FY17. In addition, the proprietary sales, being sales of Keytone Dairy products (as opposed to sales of third-party private label contract packed products) accounted for 45% of the sales revenue. The cash receipts from customers grew by 33% to AUD2.86 million in FY19 compared with AUD2.15 million in the year-ago period.

However, the blended realised gross margin contracted to 36% in FY19 due to the launch of KeyDairy AMF, whose production is currently outsourced to a New Zealand third party on behalf of the company. A statutory loss before tax of AUD3.29 million was also realised. As at 31 March 2019, the net cash balance stood at AUD9.7 million.

During the course of the year, Keytone Dairy continued to strategically implement its growth strategy based on four-pillars of - Capacity Expansion, Product Expansion, Expansion of Distribution Channels and Geographic Expansion.

Whilst maintain its online presence on JD.com and Tmall in China, Keytone listed its proprietary products through additional retail channels/platforms, including Pinduoduo, Shanghai First Food Mall, Corner’s Deli and Lotus in China; Irexchange in Australia and Kilo in New Zealand.

Keytone Dairy is consistently exploring for opportunities in new geographies, and actively working on new partnerships and distribution agreements to leverage its clean, green, pristine New Zealand credentials in addition to its Halal certification and organic certification.

The company’s stock closed higher on the Australian Stock Exchange on 7th June 2019 at AUD 5.525, up by 2.941 per cent relative to the last close. The stock has delivered a return of 33.77 per cent on YTD basis.