Exploration and mining companies contribute to a major part of the Australian economy, aided by availability of wide range of minerals across the country. Apart from the infamous names across the mineral and mining businesses, Investors can look around for some mining and exploration companies within the midcap and small cap categories. Let’s have a look at the following businesses.

Northern Star Resources Ltd is engaged in production and exploration of gold along with other minerals. On 18 December 2019, the company reported that it has done an underwritten placement of $765 million to the institutional investors. The funds are likely to be used for purchasing 50% stake in Kalgoorlie Consolidated Gold Mines Pty Ltd.

Stock Update: The stock of NST closed at $10.775, up 3.209% with a market capitalization of $6.77 billion on 20 December 2019. The stock is available at a price to earnings multiples ratio of 42.79x on trailing twelve months (TTM) basis. The stock has generated negative returns of 5.35% and 2.43% in the last three months and six-months, respectively. At current market price, the stock has generated an annualized dividend yield of 1.29%.

Oil Search Limited operates in exploration, development and production of oil and gas. Recently, the company updated regarding the material progress made on Pikka Unit Development, Alaska North Slope, with primary resource upgrade. The company made Land Use Agreement with Kuukpik Corporation, the representative native corporation and representative landowner for Nuiqsut, the community located nearest the project area. The agreement states the foundation for a long-term relationship with Kuukpik where the group is focused on ensuring that the Pikka Unit is developed in a balanced and environmentally sensitive manner.

The company reported average oil and condensate realized price of US$59.54 per barrel, 13% lower than previous quarter due to weakness in global oil prices and a different product mix, with higher condensate volumes relative to crude oil during the mooring buoy disruption. At 30 September 2019, the company held liquidity of US$1.18 billion, including US$547.3 million of cash followed by US$635.7 million in undrawn corporate credit facilities.

Stock Update: The stock of OSH closed at $7.415, down 0.336% from its previous close, on 20 December 2019. The stock has generated returns of -2.11% and 3.91% in the last three months and six months, respectively. At current market price, the stock is trading at a market capitalization of ~11.34 billion. The stock is available at a P/E multiple ratio of 18.67x on TTM basis. The stock has delivered an annualized dividend yield of 2.61%.

Jupiter Mines Limited is a mining company operates in the Tshipi Manganese Mine in South Africa and engaged in the marketing of manganese ore.

Q3FY20 Operational Highlights for the period ended 30 November 2019: JMS declared its quarterly updates, wherein the company reported sales revenue of $142.5 million as compared to $ 181.8 million in Q3FY19. Total Mined volume and total production stood at 3,360,482 bcm and 764,226 tonnes, respectively as compared to 2,872,951 bcm and 789,922 tonnes in Q3FY19, respectively. The company is positive on overall annualised sales of Tshipi and the company is expecting to meet FY2020 target. Despite lower commodity price of manganese, the company reported positive cash balance along with low cost of production. The company reported overall sales volumes at marginally higher than the company’s production level. Rail volumes came a bit lower on account of some issues with one of the routes leading to the port. The above has been rectified and regular service is expected to continue from December 2019. Road volumes were ahead due to low-grade product moved in additional quantities. 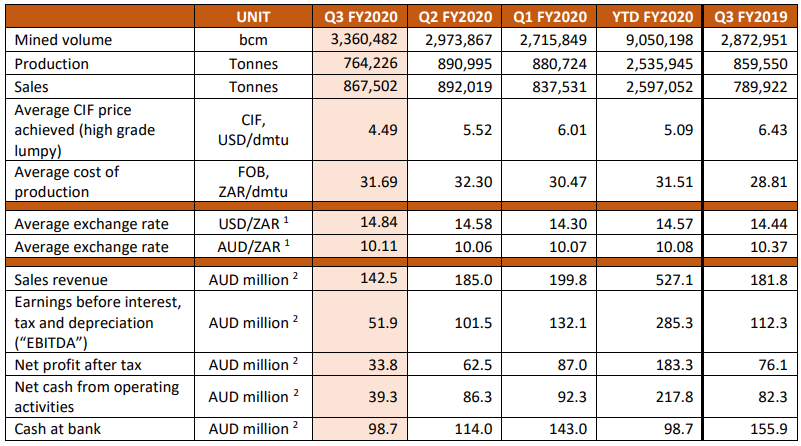 Pilbara Minerals Limited is engaged in exploration and mine development of Lithium and tantalum. Recently, the company reported options granted pursuant to the company’s employee award plan wherein the company issued options of 18,892,603.

Guidance: As per the cash-flow guidance for the next quarter, the company expects, total cash outflows of $52.999 million including production costs of $33.583 million, staff costs of $2.179 million and Capital - operating capital, feasibility costs and mine properties in development of $8.893 million.

Orocobre Limited is engaged in exploration of Minerals and production of Lithium/Potash resources in Argentina. Recently, the company reported change in director’s interest wherein, one of the director’s named Martín Pérez de Solay purchased 132,818 ordinary shares.

December 2019 Quarter Lithium Carbonate Pricing Update: The highlights are given below:

Stock Update: The stock of ORE closed at $2.735 with a market capitalization of ~717.36 million on 20 December 2019. The stock has generated positive returns of 2.24% and 4.98%in the last one month and three-months, respectively. The stock is available at a P/E multiple of 9.19x on trailing twelve-month basis.