What’s latest in Cannabis Space? A Look at MXC and EXL

Medical cannabis, which is also known as medicinal marijuana, is used in at least 20 countries either to improve the disease symptoms or for the treatment of medical conditions. The dried flower bud extract of the plant has certain medicinal properties. In Victoria, the Australian Government's national licensing program regulates the cultivation and manufacture of medicinal cannabis under the Narcotic Drugs Act 1967.

Cultivation and production of cannabis is defined by the Office of Drug Control (ODC) and an individual or business interested in cultivating medicinal hemp in Victoria needs to obtain licence as well as a permit from the Commonwealth Office of Drug Control to involve in the cultivation and production of medicinal cannabis and/or cannabis for research purposes. The licence and permit are- ODC licence and ODC permit.

In this article, we would be discussing what is recent with two ASX listed cannabis stocks- MXC & EXL

A European based biopharma company MGC Pharmaceuticals Ltd (ASX: MXC) is a leader in supplying medicines derived from GMP Phytocannabinoid for the patients worldwide. The company is working with the goal of manufacturing and supply high-quality cannabinoid-based drugs for the emerging markets in North America, Australasia and Europe.

MGC Pharma has collaboration and partnership with universities, academia and companies across the globe for conducting an extensive research and to develop highest quality of pharmaceutical products for the patients. The company has a strong product offering targeting three widespread diseases- epilepsy, Irritable Bowel Syndrome (IBS) and dementia; further MGC pharma has products in the under-development phase.

Approval for Distribution and Prescription of CannEpil® in Ireland-

On 3 December 2019, MGC Pharmaceuticals announced that the company had received formal approval for the sale of CannEpil®, which is one of MGC Pharma’s Investigational Medicinal Product’s for the treatment of drug-resistant epilepsy, in Ireland after the recommendation by the Health Products Regulatory Authority. The key highlights of this approval are-

The company announced that it has seen various prescribed standardised, reasonable cannabinoid drugs pass the 1.4k mark in the UK, Australia, and recently Brazil regions via its distributor ONIX Empreendimentos. This denoted a growth of 40% in the prescription and a 28% increase in patient numbers since the end of October 2019. 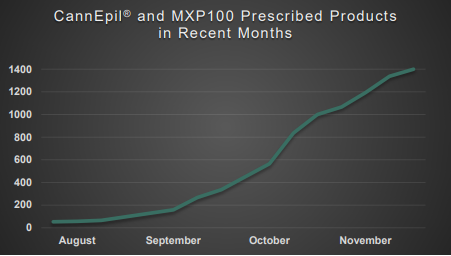 An ASX listed company Elixinol Global Limited (ASX: EXL) is a global leader in the cannabis space through its subsidiary businesses. The company is engaged in selling cannabis derived food, dietary supplements and other wellness products, and also involved in the cultivation and production of medicinal cannabis. The three key businesses of Elixinol include-

The company announced that after its review as notified to the market on 23 October 2019, it wishes to provide an update regarding Elixinol Japan.

Post considering many options for commercialisation for its Japanese business, Elixinol global has agreed to sell its 50.5 per cent interest in Elixinol Japan to Mr Sakurada, one of the other shareholders of its business in Japan.