In this article, we discuss three diversified stock with updates made on 16 January 2020, and these three companies include an intelligent workplace business, a corporate travel planning business and an investment management business.

Intelligent workplace company, LiveTiles has provided an update on second quarter for the period ended 31 December 2019. By the end of the second quarter, LVT’s annualised recurring revenue (ARR) touched $52.7 million.

At $52.7 million, it depicts a year-on-year growth of 130 per cent. Despite a higher churn rate among small customers and unfavourable FX conversion, the company achieved 130 per cent growth. 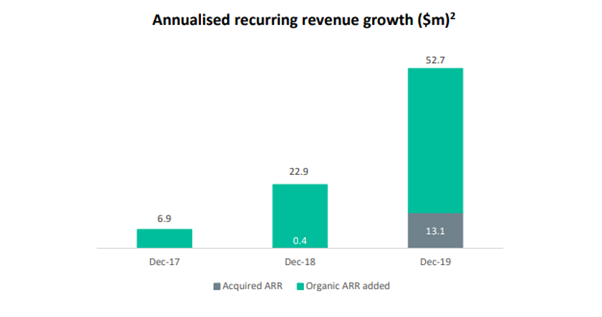 Its acquisitions from 2019, which included CYCL and Wizdom, expanded the customer, revenue and product base.  LVT’s base of ARR includes software subscription and related services, and it has made progress in introducing LVT products to CYCL customers.

During the quarter, LVT’s customer pipeline continued to grow, and it was said that the company is well positioned to increase the pipeline of partners. The company’s focus remains bundled and integrated offerings to enterprise customers across its portfolio, which has a longer sales cycle with a higher average contract value and retention rate.

In Q2 period, the company raised $55 million from retail and institutional shareholders and made additions to the Board with the appointment of Dana Rasmussen while a search process for an additional Non-Executive Director is ongoing. The company was also present at the Microsoft’s global customer conference on intranets and Microsoft Teams.

Furthermore, the company anticipates reporting strong customer and revenue growth in the current financial year, and its investments in products, partners, sales and selling channels would enable to achieve this feat.

In November last year, LVT announced its latest acquisition of CYCL AG, which was completed in December last year. CYCL has a leading presence in Switzerland and Germany and a growing business in the US.

Some of its customers include PwC, Roche, Shell, Siemens, and Swiss Life. And in the twelve-month period to 30 September 2019, the latest acquisition made a revenue of $14.1 million.

Corporate Travel Management has reported the appointment of Jon Brett as a Non-Executive Director (NED), starting from 31 January 2020. The company is undertaking a Board and governance renewal process, and the appointment is consistent with the process.

In the past, Mr Brett had a brief stint with Investec Group, and the appointments complement the Board’s capabilities in corporate advisory and finance. Presently, he sits on the Board of Mobilicom Limited as a NED.

In December 2019, the company announced the acquisition of Corporate Travel Planners Inc., which was completed earlier this month. The latest acquisition of the company is a Texas-based business in the USA, emphasising on corporate travel services.

The company believes the transaction to be key strategic acquisition, as it could deliver:

NGI noted that the investment performance had been a key contributor for the AUM growth during the December quarter, driven by global equity and relative value strategies delivering strong returns.

It was said that the long and short position in the portfolios of NGI had delivered positive alpha, and it has continued in January. This was despite upward momentum in the markets. 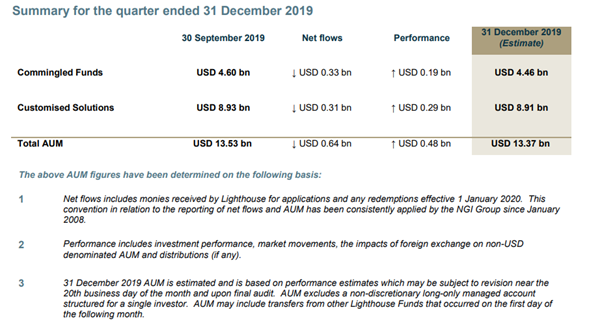 Due to the uncertainty in estimating performance fee revenue, the group had given a little conservative FY20 EBITDA guidance back in November last year. Presently, the group expects that full-year EBITDA to be a little higher than USD 33.5 million, which was announced in November 2019.

NGI received additional $385 million of inflows from one of its largest customer solutions client s during the quarter, and the client relationship continues to evolve while the group is committed to providing all benefits of its managed account platform.

Meanwhile, the group has experienced modest outflows from the Lighthouse commingled funds. And, based on historical experience, NGI believes that the positive performance of the funds should contribute to decreasing intensity in outflows.

In November 2019, NGI noted that there had been further redemptions from the remaining MAS legacy assets of $695 million, taking the total AUM to $2 billion by 31 December 2019, and around $500 million of these redemptions were associated with MAS Customised Clients.