According to a company announcement on 13 August 2019, a contract for its new Eliwana Mine and Rail project, located in the Pilbara region of Western Australia, has been awarded to Civmec Limited, a construction and engineering services provider. As part of the contract, Civmec Limited is responsible for the delivery of the ore processing and primary crushing facility for the project. Work is scheduled to start over the coming months and complete by late 2020.

During the quarter ended 30 June 2019, the company reported Total Recordable Injury Frequency Rate (TRIFR) of 2.8, compared with 3.6 at the end of the March quarter and an improvement of 24% when compared with the same period a year ago. This represented a record annual result in terms of safety TRIFR. Shipments pertaining to West Pilbara Fines during the quarter were reported at 46.6 million metric tonnes. In order to meet the strong demand for its 60.1% iron content product, West Pilbara Fines, the company focuses on optimising its product mix through marketing strategy and integrated operations. Full year shipments for FY19 were reported at 167.7 million metric tonnes, which went down by 1% on the prior corresponding period due to the impact of Cyclone Veronica.

In June 2019, the company paid a fully franked dividend of A$0.60 per share, with total FY19 dividend payments to date amounting to A$0.90 per share. This came as a result of strong operational performance and cashflow generation. With the growth and development projects at Eliwana and Iron Bridge well on schedule and budget along with other initiatives involving the Queens Valley development, ongoing investment in autonomy and relocatable conveyors, the company is aiming to further maximise the returns to shareholders.

In order to support direct product supply from regional Chinese ports, the company set up a wholly owned entity in China, to provide its customers with an option to purchase smaller volumes, in Renminbi.

Rio Tinto Limited (ASX: RIO) is an Australia registered company, which is involved in the production of copper, gold, iron ore, coal, aluminium, borates and other minerals and metals. The company was officially listed on the Australian Stock Exchange in 1962.

The company recently released its H1CY19 presentation, communicating about its financial and operational performance for the period. The company stated that safety is the highest priority of RIO. It witnessed improved AIFR of 0.41 in 1H 2019 and launched new safety maturity model while reinforcing strong focus on critical risk management (CRM) with 710,000 verifications in the first half of the year, 2019. During the period, the company continued its focus on mental health as well as wellbeing through the application of a standardised framework throughout the Group.

The company witnessed a rise in underlying EBITDA and underlying EBITDA margin during the first half of the year due to higher pricing of iron ore. It witnessed a shortfall of 14Mt because of Tropical Cyclone Veronica and fire at Cape Lambert A. It added that Koodaideri Phase 1 and Robe JV Sustaining development projects are continuing to progress. When it comes to aluminium, it stated that the lower prices affected EBITDA by $0.8 billion, notably primary metal as well as there was impact of alumina legacy contracts on EBITDA of $0.15 billion, from peak in 2H 2019. There was also an impact of weather on the production of bauxite in Q1, but Amrun ramp-up is progressing. 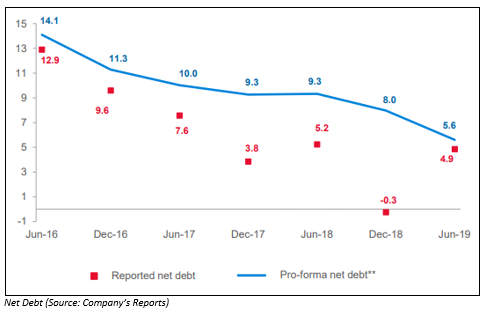 The company announced an amount of $3.5 billion as returns to shareholders, which includes interim dividend of $2.5 billion, which is to be paid in September 2019 and special dividend of $1.0 billion to be paid in September 2019. The above stated returns represent 70% of underlying earnings. The company is expecting M2M (mine-to-market) free cash flow target in the range of $1-1.5 billion run-rate from 2021.

Kirkland Lake Gold Ltd (ASX: KLA) is involved in gold mining with assets located in Canada and Argentina. It recently published its 2Q19 report, under which it reported an increase of 30% in production to 214,593 ounces from 164,685 ounces in 2Q18. The result can be attributed to a record production of 140,701 ounces at Fosterville, which is an increase of 82% as compared to the previous corresponding period. Production at Fosterville offset the lower production at Macassa and the Holt Complex. Macassa produced 49,196 ounces in 2Q19 versus 60,571 ounces in 2Q18 and a record 72,776 ounces in the previous quarter, while the Holt Complex produced 24,696 ounces compared to 26,652 ounces for the same period in 2018 and 30,658 ounces in 1Q19.

During the period, total production costs were reported at $66.2 million as compared to $66.5 million in 2Q18 and $70 million in the previous quarter. The operating cash costs per ounce sold was reported at ~$312, which is a 23% increase from $404 in 2Q18, majorly due to a 40% enhancement in the companyâs average grade from 13.1 g/t to 18.4 g/t for the same period a year earlier. The All-In Sustaining costs (AISC) per ounce sold at around $638, which is 16% better than the 2Q18 average of $757, with the improvement mainly resulting from the impact of higher average grades compared to the prior yearâs second quarter.

Tags:
RIO TINTO (ASX: RIO) Fortescue Metals Group Limited (ASX: FMG) ASX: KLA
All pictures are copyright to their respective owner(s).Kalkinemedia.com does not claim ownership of any of the pictures displayed on this website unless stated otherwise. Some of the images used on this website are taken from the web and are believed to be in public domain. We have used reasonable efforts to accredit the source (public domain/CC0 status) to where it was found and indicated it below the image.