Medical device company Cortical Dynamics Limited which is headquartered in Australia remains focused on the development of Brain Anaesthesia Response Monitor (BARM) based on an industry disruptive technology. Cortical’s breakthrough system addresses a significant unmet need and helps in maintaining an optimum anaesthesia dose during major surgery. Shielded by five patent families with 22 registered patents across different jurisdiction around the world, BARM had already been granted both Therapeutic Goods Administration (TGA) approval and the CE mark.

Cortical’s BARM has a unique approach to calibrate anaesthetic monitoring to the individual patient rather than using a statistical average as used in systems developed by competitor products, resulting in improved patient outcome and saving time, money and lives.

Cortical’s fundamentally differentiated technology is focused on a pioneering technique of EEG monitoring involving a real-time measurement of a rhythmic electrical activity of patients’ brain which is documented via electroencephalogram (EEG).

The global brain monitoring market generated approximately $3,850 million in 2017. It is estimated that 312 million major surgical procedures around the world would require anaesthesia on an annual basis and 327,689 operating theatres globally.

Bearing in mind these statistics, Cortical’s Core product, BARM has huge potential to scale up. As it addresses two important patient monitoring market segments offering BARM instant expansion potential beyond the delivery of anaesthetic to brain monitoring in ICU, concussion and other areas. These segments are-

The initial strategy of Cortical for commercialisation of BARM within Europe is concentrated on the Total Intravenous Anaesthesia (TIVA) market. TIVA is a process of inducing as well as maintaining general anaesthesia intravenously without using any kind of inhalation agent.

In the European Union, 20 % of the major anaesthesia procedures (29 million) being carried out annually, are total intravenous anaesthesia using propofol, whereas 55% (Circa 16million) are balanced anaesthesia that uses a mixture of intravenous agents such as volatile gases and propofol, and this creates a considerable market opportunity in Europe alone for Cortical valued between $83 million to $229 million.

Cortical aims to strategically build a strong rapport with chief distributors in anticipation of boosting product sale and support. 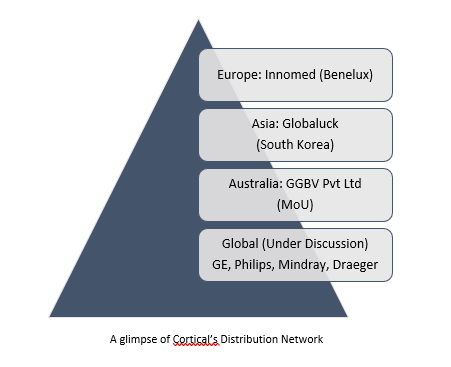 A glimpse of Cortical’s Distribution Network

The accomplishment of TGA approval and the CE mark enabled “BARM” to be marketed and sold primarily into the United Kingdom, European, Asia-Pacific, South American markets.

BARM’s versatility outranks the depth of anaesthesia which can be applied to a range of other EEG based markets, including drug discovery, neuro-diagnostic, drug evaluation, as well as the evolving Brain computer Interface (BCI) market.

There are other substantial opportunities offered by consequent extension of BARM by continuing development of the product in order to carry out additional functions, such as neuro-diagnostics of changes in brain and memory functions providing a timely warning of degenerative diseases, tranquiliser supervision & pain response for trauma patients in ICU’s.

Simply Put, with abundant market opportunities on its way, Cortical is well-positioned to move further up the ladder and progress BARM’s sale at a global scale expanding its footprints across Europe, Australia, New Zealand, Korea, Hong Kong and the USA.